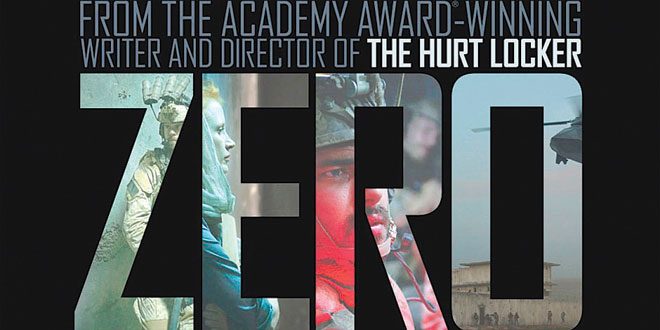 The beginning of “Zero Dark Thirty” is controversial and unsettling. Shortly after the first scene at the World Trade Center, the site changes. A CIA operative has an Al-Qaeda member in a dank dungeon – a “black site” – somewhere in Pakistan. It’s 2003. What makes the scene disturbing is the sequence of torture that takes place – slapping, naked abuse, waterboarding and ultimately forcing the prisoner, Ammar (Reda Kateb) into a tiny box. What makes the scene controversial is the question it raises.

Some observers think it glorifies torture. Others believe it demonstrates that torture produces little or nothing of value. Indeed, later in the movie the CIA gets useful intelligence by lying to Ammar while offering him cigarette and a drink without resorting to torture. In any event, the opening launches a remarkable story of American futility and ultimate success on May 1, 2011, when Navy SEALS carried out Operation Neptune’s Spear at Bin-Laden’s hideout in Abbottabad.

The torturer, a CIA agent named Dan (Jason Clarke) is a professional. He tortures and torments Ammar without remorse, and the suffering of the Al-Qaeda prisoner is painful to watch. The scene is brought back vividly later as three CIA agents watch the President of the United States on television say that, ”America does not torture.” The agents betray no expression.

Zero Dark Thirty is a triumph for Kathryn Bigelow, a superb director who previously gave us “The Hurt Locker,” Mark Boal, the author of the story, and Jessica Chastain who portrays Maya the CIA agent who has spent her 12 year career on one project – finding Osama Bin-Laden. Bigelow is brilliant in developing scenes of war in Iraq (The Hurt Locker) and Pakistan/Afghanistan in Zero Dark Thirty.

The raid at Abbottabad is photographed mainly through night vision goggles that give a sense of reality seldom seen in movies. The book by Mark Boal admirably mixes fact and fiction to produce a compelling 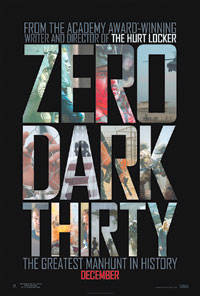 story. There is a little lightness, particularly in the portion of the film dealing with the SEALS’ camp, but it is essentially a study of the dark drudgery of the intelligence business.

She is tight, frustrated, uncomfortable but very persistent. In face of obstacles created by Al-Qaeda and internally by CIA she pursues her goal without any life outside her mission. Chastain’s performance is compelling as she pursues theories and leads that no one else believes. She is more a detective than anything else, relying on deduction to reach her conclusions. In the torture scene there’s an observer in a ski mask. As the scene develops the ski mask is removed to reveal a young woman with a cascade of red hair. From there on Maya is the focal point. She is tough. She does not shy away from unpleasantness and violence.

At one point she commands a CIA agent to slap a prisoner. She shares very little, except with a few other CIA agents, notably another female operative (Jennifer Ehle). As Maya continues her search she runs into CIA roadblocks, culminating in a nasty exchange in which she heatedly threatens to expose the station head with exposure. After finding one apparently small clue Maya uses that piece of information for eight years as she expands the scope of her search. Along the way she perseveres, notwithstanding virtually every internal and external obstacle imaginable. Dan finally returns to CIA headquarters in frustration even as Maya continues her relentless pursuit.

The trail of Bin-Laden is punctuated by bombings in Pakistan, England and Saudi Arabia. The trail is followed primarily by computer and listening devices that lead (together with the information from Ammar) to the courier who serves Bin-Laden. Maya develops her theory that Bin-Laden must rely on a courier for communication because he cannot risk cell phones or the Internet. Her painstaking piecing together of the jigsaw puzzle pays off. How does she react at the end? Not with the joy of the winning touchdown.