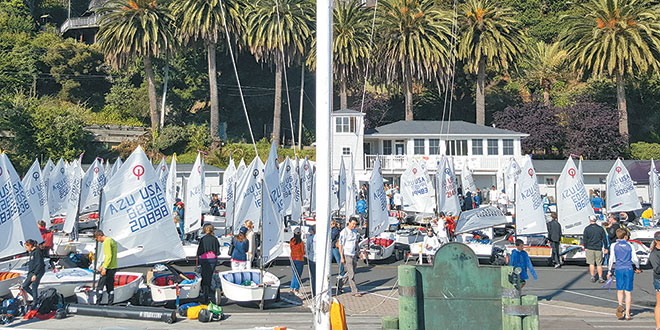 Meet 10-year-old Ryan Garraty, a fifth grader at Tommie Barfield Elementary School. Ryan is passionate about sailing, an activity he’s been a part of since he was 7. About once or twice a month he and his family will travel all across South Florida in order to compete. Last month Ryan qualified for the U.S. Team Trials Regatta in San Francisco, California, an invitation only event.

Garraty is a second-generation sailor. You could say it’s in his blood. His father Robert Garraty got his start in sailing when he was just a teen; he would eventually go on to compete for the University of Rhode Island sailing team. Robert along with his wife Gigi Garraty, a teacher at the Marco Island Charter Middle School, are self-professed 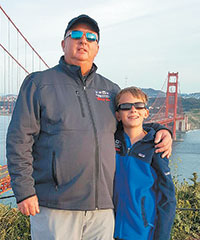 Ryan and his father Robert in front of the Golden Gate Bridge. Submitted Photos

sailing enthusiasts. “We’re a sailing family!” said Gigi. “My husband and I, and Ryan, and our younger son Colin, 6, go Ryan’s competitions together. It’s a nice way for us to get together for Ryan’s sport to support him. We have a lot of fun.”

Ryan began where most young sailors on Marco Island begin, at Mickey’s Sailing Center. His parents enrolled him in one of the summer camp programs the center offers and the rest is history. “Ryan took to it right away,” said Gigi. “We could tell that he loved it. We think sailing is here to stay.” Ryan now sails with the Naples Community Sailing Center racing team. He practices twice during the school week and then once over the weekend.

“The cool thing about sailing 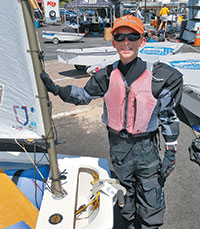 Despite difficult weather conditions, Ryan came in fifth place in his division.

is that it’s one of those things he’ll know for the rest of his life, said Gigi. “He’ll always have this great skill. Once you can sail a small little boat like he has, you can pretty much sail anything.”

On April 19th, Ryan competed against the best of the best at the U.S. Team Trials Regatta in San Francisco. In order to qualify for this invitation-only event, sailors needed to place in the top 25% of all sailors in their class, an accomplishment in and of itself. From across the country, 220 participants ages 9 to 16 competed. It’s unusual for someone Ryan’s age to qualify for this event where the top Optimist dinghy sailors will be competing for spots on the U.S. National Team. 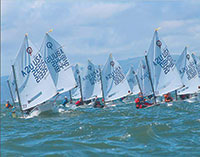 The competition took place out of the San Francisco Yacht Club.

pretty sunny but really windy,” said Gigi. “The Bay is really known for being wild and choppy. And as the day goes on of course the wind gains velocity, so it gets harder and harder.”

The windy conditions were pretty different than what Ryan is used to in Florida. The competition was also more difficult, as it was at a national level. “Team Trials is different than most regattas that I do because it has more competitive sailors in it,” said Ryan. But despites these hurdles, Ryan came in fifth place in his division, earning him a trophy. “My husband Robert and I are very proud of him!” said Gigi.

The Garraty family would like to give thanks to Lois Dixon, Vice Commodore at the Marco Island Yacht Club for her help and support.