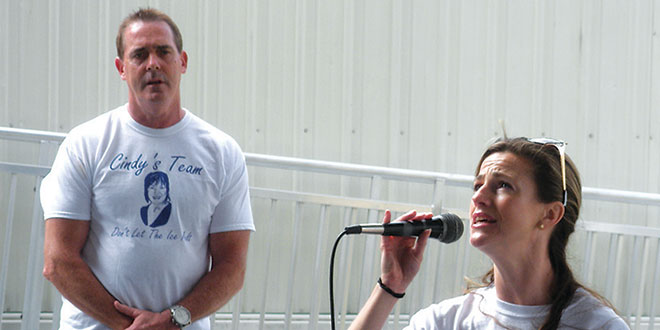 Mary Jo O’Regan treated the walkers to an impassioned version of “The ALS Odyssey Anthem.”

Finding a cure for Amyotrophic Lateral Sclerosis – ALS – and supporting those afflicted with the disease and their families is a cause that drew both young and old to Marco Island recently.

The reason was the first annual “Cindy’s ALS Odyssey Walk” fundraiser, which benefitted the ALS Association Florida Chapter. Held at Mackle Park, the event drew about 80 walkers and raised $5,500 for the organization.

Commonly known as Lou Gehrig’s disease, ALS is an incurable and progressive neurodegenerative disease that affects nerve cells in the brain and the spinal cord. As the disease progresses, voluntary control of muscles is lost, eventually relegating sufferers to a wheel chair and even affecting their ability to do such things as speak, before ultimately resulting in death.

The namesake of “Cindy’s ALS Odyssey Walk” is Cindy Amerine, 69, a Naples resident who was diagnosed with the disease in November of 2014 after a roughly two-year-long battery of tests and exams that were required to identify the difficult to diagnosis malady.

The wheelchair-bound Amerine was frequently beaming during the event, chatting enthusiastically with any and all who approached her. She was joined by two 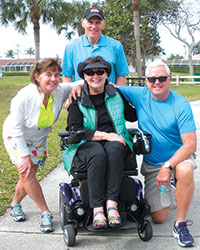 Cindy Amerine is joined by her physical therapist Lisa Jones, her husband Dave, rear, and Tim Rink, a family friend from the Amerine’s hometown of Sandusky, Ohio. PHOTOS BY DON MANLEY

ALS patients at the walk, Kent Dickerson of Marco and Madeline Kennedy of Bonita Springs.

It was her friend, Mary Jo O’Regan of Marco, assisted by her husband Michael, AKA “Moose,” who was the walk’s chief organizer.

“We will defeat ALS and that’s why we’re here today,” Mary Jo O’Regan announced to the crowd shortly before the walk began.

Her friend, Helen Donaghy, of Marco, was among the walkers.

“I work with her (at Engel & Volkers real estate, Marco Island) and I think it’s an amazing cause,” said Donaghy. “It’s great to see so many people out on a Saturday morning and Cindy is an amazing woman. She’s an inspiration to everybody. It’s a disease that affects so many people and you don’t know until you have an event like this, how many people’s lives have been affected.”

Marco resident John Barrett was accompanied by 21 people, some from as far away as Bonita Springs, that he recruited to take part in the event. “I lost my wife three years ago to ALS so I brought a group of people,” he added.

Club also took part in the walk and helped to raise funds for the event.

MIA junior Kendall Feehan said she learned of the walk during a Key Club meeting. “I just thought that if I had the opportunity to help people out, why not use my free time to help people in need,” she said.

Before the walk began, Cindy Amerine’s husband Dave encouraged the youths to turn off their cell phones and iPads and “hold someone’s hand that you love because you don’t know when you won’t be able to do it again.”

Mary Jo O’Regan also treated the attendees with a rousing, live rendition of “The ALS Odyssey Anthem,” for which Cindy Amerine composed the lyrics and Moose O’Regan, the melody. A video of the song can be found at www.youtube.com/watch?v=4_PMmSRkcQY.

She and Cindy Amerine were overjoyed with the turnout and the donations.

“I am overwhelmed by the community spirit that the event received from both Marco Island and Naples,” said O’Regan. “The generosity that people displayed will forever warm my heart and will certainly benefit the effort to defeat ALS, I cannot thank them all enough.”