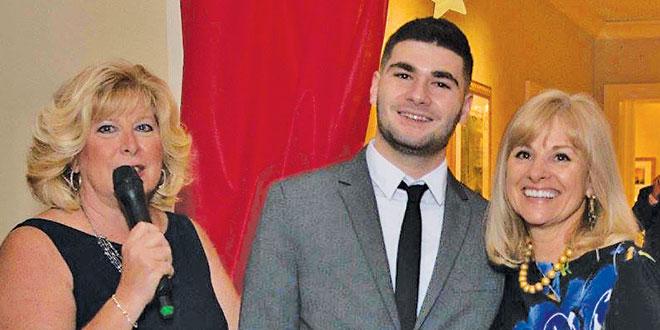 Saturday, January 23, 2016 was a special night for the Greater Marco Family YMCA. A Red Carpet Affair was held at Hideaway Beach Club to raise funds for the organization.

The formal event was set up like a Hollywood-style event, with photographers and a red carpet greeting guests as they entered. Mutual of Omaha’s Dianna Dohm acted in tribute to Joan Rivers- announcing guests and asking about their fashion choices for the evening. John Ritchie caught it all on camera, paparazzi-style. Throughout the night guests danced and socialized in the lavishly decorated room. 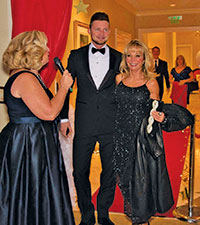 Justinas Maliauskas and Carla Bottalla on the red carpet as volunteers greet them.

committee did a super fantastic job of creating the Hollywood theme night.”

The reason for the event was not lost in the Hollywood style. When Cindy addressed the room she described all the progress the YMCA has made over the past year, and the strength of the Board of Directors. The Greater Marco Family YMCA Allyson Richards, immediate past president was recognized for her hard work and dedication. TJ Boone, 2016 board president thanked Allyson for her valued “time and leadership.”

Allyson credited a “perfect trifecta” of board of directors, volunteers and donors in building the new youth center. 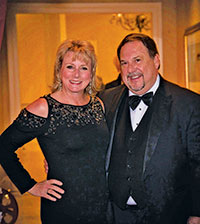 Allyson and Jim Richards. Allyson is past president of the YMCA board of directors.

the cash call conducted by John Riley, Riley Philanthropy. At the end of the evening a raffle was conducted, the winner received a special night out which included dinner at Trulucks, Young Frankenstein at the Sugden Theatre and a limo ride from Classic Luxury Transportation.

About the event, Cindy told us, “The Y’s annual campaign is all about supporting all those folks young and old that may be challenged financially and to help the Y obtain resources for programs that benefit our community. This year, we highlighted our Parkinson’s Program and the challenges they face.”

All proceeds raised during the evening will benefit YMCA programs. For more information, go to www.greatermarcoy.org.