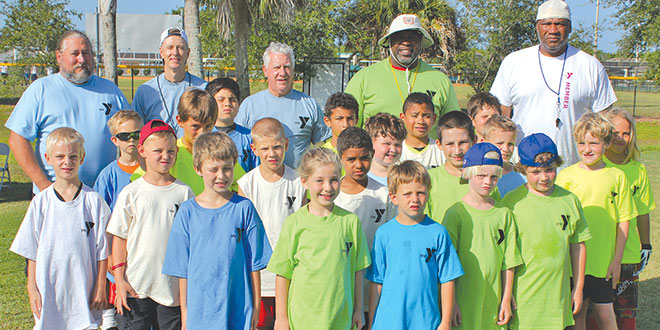 Athletes taking part in the skills camp, along with their coaches, former NFL players through the Fellowship of Christian Athletes and the Marco Island YMCA ran the camp, with assistance from YMCA volunteers.

Two former NFL players towered over athletes, but it wasn’t the size that made the Marco Island YMCA Football Skills Camp a success.

The camp was put on by former NFL players Steve Grant and Michael Cobb, through the Fellowship of Christian Athletes and Marco Island YMCA.

Sometimes in a gentle voice, or a booming voice, the kids, ages 6-13, learned a lot of football and many life lessons.

Grant was a linebacker for the Indianapolis Colts, 1992-1997, and the Tampa Bay Buccaneers in 1998. He understands the importance of team work.

Emilee Morris chases the football. PHOTOS BY ROGER LALONDE[/caption] class=”CBNGeneralContent”>“For me, sports parallels life,” he said. “The emphasis is on selflessness, building up your teammate. Being a success means you help someone else, to me that parallels life.”

“Working with kids gives me a chance to encourage them to give their best efforts. We are reinforcing, parents, teachers, another positive voice in their lives,” Cobb said. 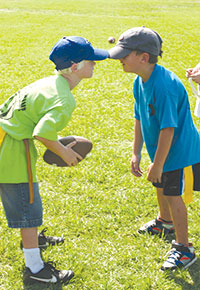 Cole Morris goes head-to-head with Christian Linton before he hikes the ball.

Tristan Guttenfelder’s dad, Glendon, spoke of what the camp meant to them.

“Tristan (7) loves football, would love to be in the NFL,” Glendon said. “The contact builds character and helps with his Attention Deficit by keeping him focused.” Tristan romped for a touchdown.

Nick Danu was glad that his son Nick, 7, took part.

“It is an excellent camp, learning from those at a professional level. It can’t get any better.”