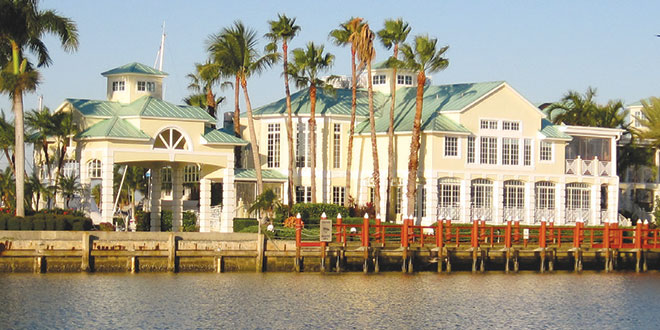 The time honored installation ceremony, Change of Watch, is based on military tradition in which responsibility, authority and accountability are transferred from the current leader to the new commander. Outgoing Commodore Dick Irwin will hand over command to the new Commodore Randy Harris. At the Marco Island Yacht Club (MIYC), this is signified by lowering the past commodore’s burgee (triangular flag), and replacing it with the new commodore’s burgee.

The commodore has overall responsibility for the cruising fleets, sailing regattas, boating programs, matters relating to the Florida Council of Yacht Clubs and social activities. Commodore Randy Harris will swear to uphold the MIYC mission statement, “To provide an outstanding boating, social, and dining environment that is friendly, comfortable, affordable, and invites participation.”

The festivities commence at 5:30 PM with the Change of Watch Ceremony in the courtyard, including a Colors Ceremony and concluding with the singing of “God Bless America.” The Change of Watch Ceremony will be followed with cocktails and passed hors d ‘oeuvres, and then by dinner featuring New York Strip Steak Oscar. After dinner, the club members and their guests will enjoy dancing to the music of Jim Breen.

In preparation, Clubhouse Manager Tom Leonard and his staff are planning for over 80 members and guests. Dress is formal, with gentlemen wearing either the Marco Island Yacht Club uniform or black tie.

Marco Island Yacht Club is located at the foot of the Jolley Bridge. Its existence as a private club dates back to 2000. For information regarding voting and social memberships, contact Membership Director Jessica Rigor at membership@marcoislandyachtclub.net. MIYC is a member of the Florida Council of Yacht Clubs.