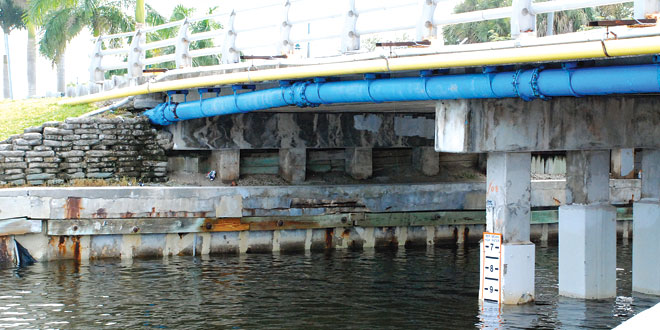 Despite a small glitch, work has begun on the city’s $8.625 million Smokehouse Bay Bridge project. On Aug. 4, bridge contractor Quality Enterprises USA began traffic pattern modifications to close the southbound portion of the bridge, which will allow work to begin on the major utility relocations and directional boring for the 20” water main under the channel.

The bridge project received the green light for the Marco Island City Council earlier this summer after years of debate over its cost and design. The deal was sweetened in June when Marriott International Inc. offered to kick in $1 million to shorten the project’s construction schedule from 18 months to 10 months in an effort to eliminate any potential overlap between the bridge work and the Marco Island Marriott Beach Resorts’ $150 million renovation project.

While a notice to proceed was issued immediately for the bridge work to begin, the contractor initially was stymied by a communication issue between city staff and the two utility companies whose lines needed to be moved — Lee County Electric Cooperative and TECO Gas. The issue was hashed out by City Council during its July 21 regular meeting.

During that meeting, Marco Island’s Public Works Director Tim Pinter requested that Council revise the notice to proceed to reflect a date of Sept. 1 because the two utility companies were “in a situation beyond their controls to move the utilities.” Pinter indicated the utility work would probably not be completed until the end of August.

Even so, he continued the city has been working with Quality Enterprises on submittals, answering requests for information and ordering materials. Pinter assured councilors that moving the notice date would not impact the completion dates for the bridge work. While councilors were not happy about the situation, they approved Pinter’s request by a vote of 6-1, with Council Chairman Ken Honecker voting in dissent.

“We approved this project May 17,” Honecker told Pinter. “Why (the utility companies) weren’t told to move the utilities months ago is beyond me. Clearly staff has let us down on this incident. I will be the one ‘No’ vote on this item.”

Now, the utility work is underway, and lane closures and traffic detours have begun in the vicinity of West Elkcam Circle and will continue southbound to south of Tigertail Court. There will be two-way, single-lane traffic in both the north- and southbound directions within these construction limits. These traffic patterns will remain in effect until the summer of 2015 on a 24-hour, seven-day-a-week basis.

Advance warning signs and message boards are posted and will be continuously monitored for traffic movement. For more information or questions for the Marco Island Public Works Department, call 239-389-5000.