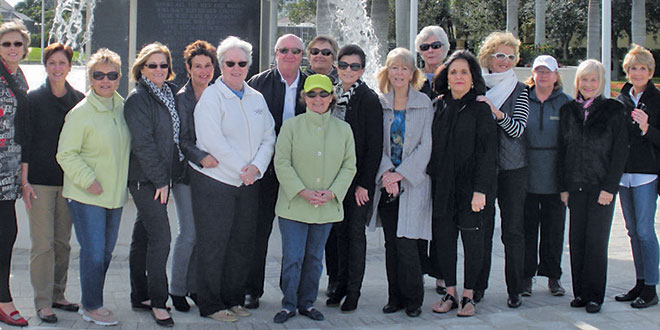 The Marco Island Woman’s Club, joined by Lee Rubenstein (center), at the Freedom Fountain for the dedication ceremony. PHOTOS BY DON MANLEY

The Marco Island Woman’s Club has donated a plaque that now graces the base of the Freedom Fountain at the Veterans’ Memorial at Marco Island’s Veterans Community Park.

A dedication ceremony for the plaque was held recently at the fountain, with the club’s officers and members in attendance, along with Lee Rubenstein, chairman of the Veterans Memorial Fundraising Committee.

The plaque states that the club “honors all those who served and all those who sacrificed for our freedom.” It is the club’s second donation to the memorial. A bench bearing a plaque inscribed “Donated by Marco Island Woman’s Club, Established 1966,” was dedicated in July of 2014.

“It’s groups like yours that have made the memorial successful,” said Lee Rubenstein, chairman of the Veterans Memorial Fundraising Committee, which raised more than $600,000 over ten years to create the memorial.

Penny Weidner, the club’s president for 2016, said the plaque was the idea of 2015 president Sharon Kampmeyer. “The beautiful Freedom Fountain is a jewel of Marco Island and we, the women of the Marco Island Woman’s Club, are very proud to be part of it,” she added.

This year marks the Woman’s Club’s 50th anniversary and its slogan for the year is “A Golden Celebration – Celebrating 50 Years of Giving Back.” The organization raises funds to support its scholarship fund, which provides assistance to high school seniors from the island that are moving on to higher education, as well as local charities, such as the Marco Island Historical Society, the Marco Island Center for the Arts and Meals of Hope Collier County.

Prior to the dedication, Weidner described the club as being “a great organization that wants to do good for the community.” She added, “It makes me feel good that it’s for the veterans. They have done and do so much for us.”