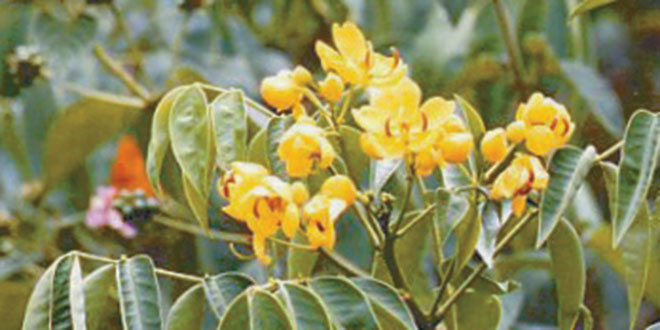 ummer heat is beginning to subside and we actually have temperatures in the mornings in the 50’s and 60’s. The first thing to do is open all the windows and doors.

The next step is to start enjoying all the cassias, or sennas, that begin to bloom this time of the year.

Cassias are generally known for their fast growth. Let me get this over with now before we all get confused: Cassias and sennas are the same group of plants, but some people with too much time on their hands decided to change the name from cassia to senna. I prefer cassia, probably because I’m old and I hate change.

These trees and shrubs are some of the showiest plants we have in the fall in Southwest Florida. Their bloom time is usually late summer or early fall and can bloom continually throughout the winter months. In fact, I have actually seen them bloom for more than a year straight on the same tree. I think, like everything else, they 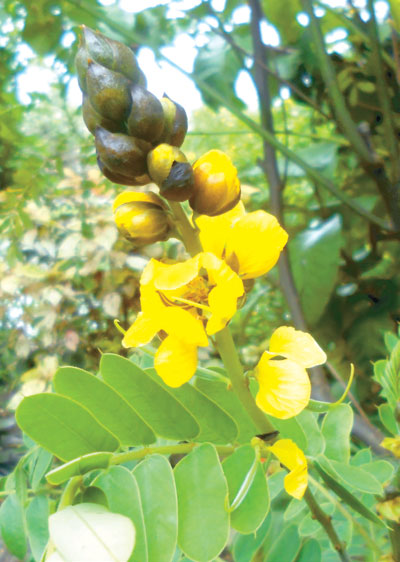 Cassias can grow on a balcony or lanai, as well as in the landscape. They can be kept as a container plant with judicious pruning. They are all members of the pea family (Fabaceae).

Cassia bicapsularis, also known as Galbrata cassia, is a noxious weed but is still for sale here in Florida. I would suggest planting a native cassia like Privet cassia (Cassia ligustrina) or Bahama cassia (Cassia bahamensis) in place of the more invasive one.

One of my favorites is the popcorn cassia (Cassia didymobotyra) and another is desert cassia (Cassia polyphylla). The desert cassia can be kept as a small tree or shrub which, by the way, is the slowest growing plant I have ever encountered that will bloom on and off all year. Another little known cassia in Florida is the canyon cassia (Cassia wisilizenii), which makes a beautiful small shade tree. It has feathery leaves making it as 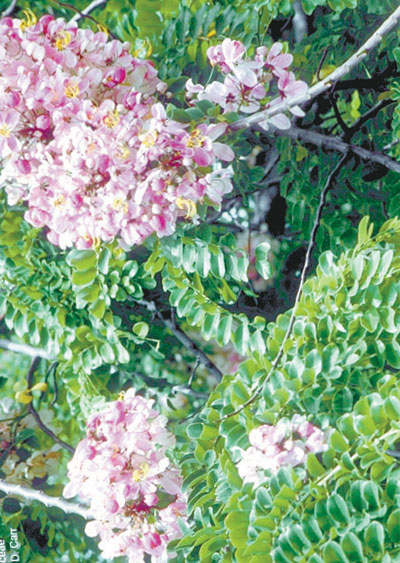 nice when in bloom as out of bloom. It has your typical yellow blooms that most cassias have and the root system is not a problem as those of other trees can be. There are also a few red and pink cassias. Cassias are a great alternative to trying to stuff live oaks in where they do not belong.

Some other favorites are:

Candle Bush (Cassia alata): A large cassia, also known as candelabra cassia because the flowers shoot upward just like a candelabra full of yellow candles. It makes an attractive specimen shrub and is one of the most spectacular. Alata will also do well as a container plant but must be controlled; it prefers, like most cassias, a lot of sun and should be trimmed back once a year.

Popcorn Cassia (cassia didymobotrya): Popcorn cassia is very similar to alata cassia and can also be used as a specimen plant. Likes full sun and gets ten feet in height. When rubbed in one’s hand it smells just like buttered popcorn. I’m not kidding; it’s made quite a few 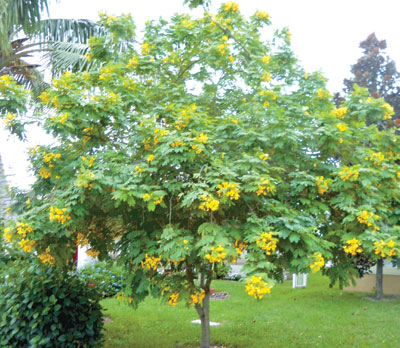 Sunshine Tree (Cassia surrattensis): This cassia makes a great small tree. In case you did not notice there are hundreds planted around Naples. It matures at about 15 feet and is almost the same in canopy spread. It will take full sun to partial shade. The sunshine will bloom on and off all year but looks it’s best in fall and winter. They do; however tend to go down in strong winds if their canopies are not thinned out from time to time. On the good side they can be put back up easily. Let’s face it there is not much that won’t blow over in strong winds in Florida.

Bahama cassia (Cassia bahamensis): Bahama cassia, also known as cassia chapmanii, is a large shrub that is covered with yellow flowers all fall. Bahama cassias are great in the landscape when planted in mass. This one is native to Florida.

Privet cassia (Cassia ligustrina): Privet cassia is a shrub that grows to ten feet and can be six to eight feet in width. Like most cassias 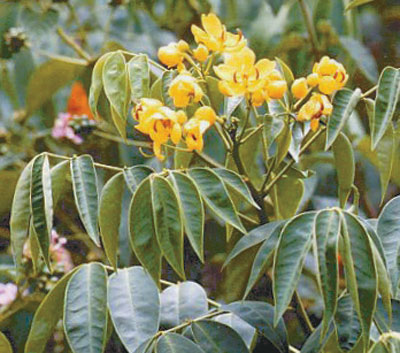 it will bear yellow flowers. They do well in full sun to partial shade and bloom on and off all year and have average water needs. They are also native to Florida and will reseed themselves- maybe more then we like.

Coffee cassia (Cassia occidental): This is a wild growing cassia growing in woods everywhere in southwest Florida. I have never seen it for sale as a cultivated plant. This cassia sometimes called stink weed because when the leaves are crushed it has an unpleasant odor. These are no reasons to count this cassia out, keep your eyes open. I know the dainty sulfur and the barred sulfur love this one.

Apple blossom tree (Cassia javanica): Most cassias bloom brilliant yellow flowers, but this one has pink flowers, and most spectacular ones, I might add. This tree gets quite large – a little larger than most cassias actually the size of a northern apple tree – so give them room. It requires full sun. In Hawaii the streets are lined with this cassia.

Remember, one of the best reasons 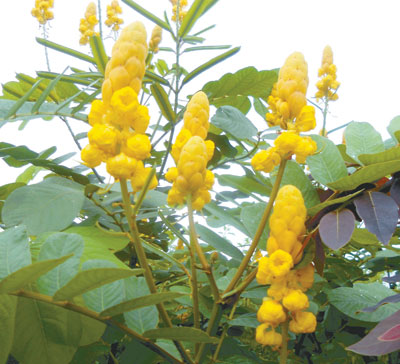 to have cassias or sennas in the garden is that they are the host plant (plants the female butterfly lays her eggs on) to the many sulfur butterflies (yellow butterflies) we have in abundance here in southwest Florida. Orange barred sulfur, large orange sulfur, cloudless sulfur, and the dainty sulfur just to name a few of the many butterflies that are attracted to cassias. KEEP BUTTERFLYING!!!

Mike Malloy, local author and artist known as “The Butterfly Man” has been a Naples resident since 1991. A Collier County Master Gardener, he has written two books entitled “Butterfly Gardening Made Easy for Southwest Florida,” and “Tropical Color – A Guide to Colorful Plants for the Southwest Florida Garden”, and currently writes articles on various gardening topics for several local publications. Mike has planted and designed numerous butterfly gardens around Naples including many schools, the City of Naples, Rookery Bay, the Conservancy and Big Cypress. Bring your gardening questions to the Third Street Farmer’s Market on Saturday mornings or on Thursdays at the Naples Botanical Garden where he does a Plant Clinic or visit his website, www.naplesbutterfly.com