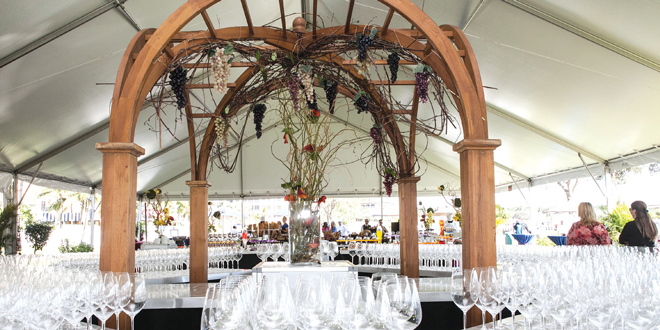 How do you get 250 of the wealthiest couples in Naples to donate $8.5 million towards children’s charities in only five hours? Give them wine. Give them lots of wine! Ranked as the nation’s top rated charity wine auction since 2004 by Wine Spectator Magazine, the Naples Winter Wine Festival’s combination of luxury and charity is certainly a weekend to be celebrated.

Since its inception in 2001, the Naples Winter Wine Festival has raised $107 million towards improving the lives of underprivileged and at-risk children in Collier County. Add another $8.5 million to that after the 2013 festival held at the Ritz-Carlton Golf Resort of Naples on January 24th through the 27th. It was a 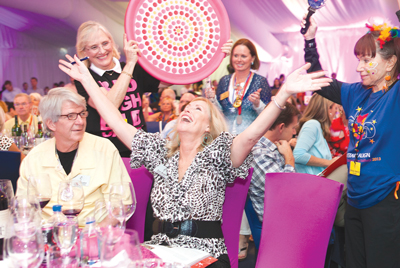 weekend of wining, dining, spending money and spending time with children directly impacted by proceeds from the festival.

The charity money raised is allocated through the Naples Children and Education Foundation (NCEF) – the festival’s founding organization. Through NCEF, St. Matthew’s House, Naples Botanical Garden, David Lawrence Center, Boys & Girls Club of Collier County, YMCA of the Palms, The Shelter for Abused Women and Children, Eden Florida, and 29 other Collier County based organizations have become beneficiaries of the $107 million, benefiting over 150,000 Collier County children.

A price tag of $20,000 gave two couples the opportunity to the full weekend activities which included a vintner dinner hosted by a celebrity chef at one of 17 elegant 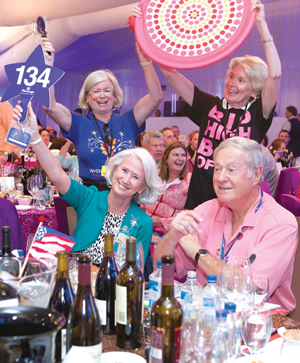 private homes held Friday evening. Each home was decorated according to the theme of this year’s festival, “When Stars Align.” One home was even transformed into Star Trek with actors portraying characters such as Spock and Captain Kirk.

Those who chose to only attend the auction paid $8,500 per couple. Beginning at 11 AM on Saturday the 26th, attendees gathered at the Ritz Carlton Golf Resort to view the spectacular auction lots, sample the culinary delights of chefs from seven different Ritz Carlton Resorts throughout Florida and sample over, “100 different kinds of wine,” according to Dr. Matthew Black, a physician in Naples who volunteered as a wine steward for the day.

“Vintners have the chance to come 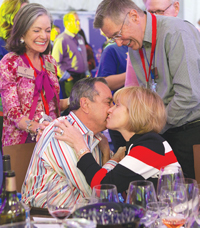 here and try other vintner’s wines. There’s also a lot of rare wines here today that you would never really see.” The success of the festival, in Dr. Black’s opinion, is that people, “are reassured that their money doesn’t go anywhere else. It stays in the community.”

Vintner Tim Mondavi of the Robert Mondavi Winery in California brought a few special samples from his newest line Continuum to the festival. “My family’s been a part of the event since very early on. My father was an early chairman of it, I’ve been [a chairman] a number of times as well as my daughter. It’s important for the local charities and it’s also important to celebrate wine. Wine 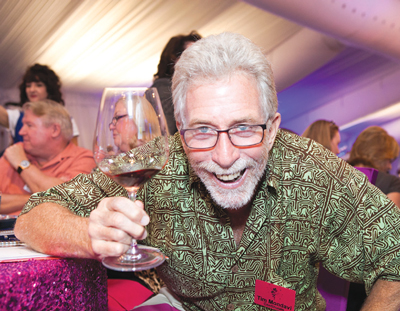 is a helpful contribution to life if it is respected, so it’s nice to be a part of that and a part of the festival.”

Dave and Pat Gibbons have been attending the festival for five years and are also trustees. Every year they have bid on, and won, an auction lot and have essentially traveled the world from it; they have been to South Africa, Tuscany, Italy, Oman and the Maldives and on an Alaskan Yacht cruise.

Ready for another win, the Gibbons’ entered the enclosed tent for the live auction at 1 PM. Chandeliers hung from the tent ceiling, illuminating the sequined tablecloths that draped to the floor. The white walls of the tent glowed in

hues of blues and purples and greens as the lighting changed. Four large screens – two on either side of the auctioneer podium made for an even more exciting experience as camera crews caught all the action during the live auction.

Auctioneers Lydia Wickliffe Fenet and Humphrey Butler entertained and managed to get more than a few paddles raised. Sixty-five auction lots were up for bid; the bidding for each item started at $10,000. The highest bid went to lot 30: “La Dolce Vita at 200MPH+.” For a whopping $750,000 the winner took home the all-new Ferrari F12berlinetta. The lot also included access to the two day Ferrari Driving Experience at Le Circuit Mont-Tremblant in Quebec and 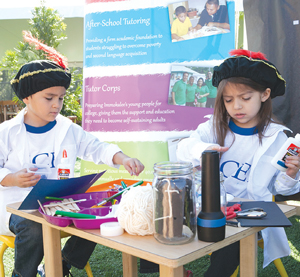 Other auction lots included a trip to the Triple Crown of Racing, a yacht cruise through Greece, a seat at the “Dancing With the Stars” finale, a brand new Maserati, a walk down the red carpet at the Emmy Awards, a trip around the world, a chance to own your own winery, a cruise for three couples that included three Bulgari diamond earring sets, an African safari and a 65-year collection of the Chateau Mouton Rothschild artist label wine series.