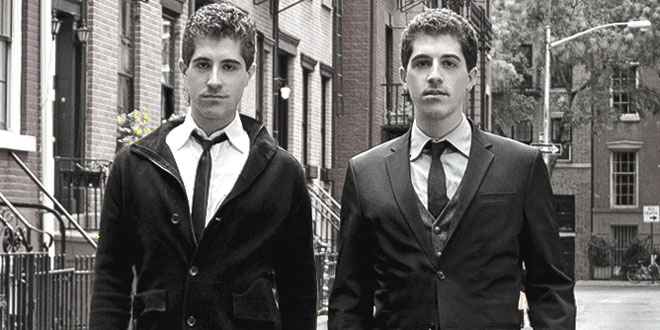 Back by popular demand for three shows only are New York City entertainers, Will & Anthony! Performing their ‘BROADWAY, OUR WAY’ Concert. Sunday, January 13 thru Tuesday, January 15 at 6 PM.

This dinner and concert event will be held at Marco Island’s House of Mozart.

Acclaimed as “displaying an engagingly brassy professionalism” by The New York Times, NYC performers Will & Anthony return to the Naples Waterside Shops’ Barnes & Noble for a CD signing and short performance on Sunday January 13 at 2pm and then on to Marco Island’s House of Mozart with a brand-new, full concert on Sunday, January 13, on Monday, January 14 and also on Tuesday, January 15 at 6 PM. Their show will span songs from Broadway to Classic standards to Italian favorites. They will be joined, once again, by Brad Gardner on piano.

The House of Mozart is located in the Shops of Marco on Barfield Drive. While enjoying the music, patrons will be served a five course dinner. Dinner and show (beverages not included) is $65.00. Call 239-642-5220 for reservations and information. Limited seating, these shows will sell out!

Will & Anthony’s debut album, “Make Someone Happy,” is an intimate collection and eclectic mix of Classic Standards (“Make Someone Happy,” “Smile,” “When I Fall in Love,” “Get Happy/Happy Days,”) Broadway tunes (Stephen Sondheim’s “Everybody Says Don’t” and “Pretty Women”), and Contemporary Songs (“The Prayer,” “Nothing to Lose But Your Heart,” and “A Ray of Hope”). The album is currently available online at www.WillandAnthony.com in the “Store” section.

The New York natives and Boston College graduates are enchanting audiences around the country and world singing fresh arrangements of the Classic Standards and Broadway along with intertwining their improvised comedic interplay with one other and audiences. Will & Anthony have appeared on television on Good Morning America and the Rachael Ray Show and have also appeared as headliners at New York City’s premiere nightclub, Feinstein’s at the Loews Regency. They also recently performed at Avery Fisher Hall in the finale of “Sondheim: The Birthday Concert” and have performed with orchestras around the country including the Colorado Symphony, Cleveland Pops, Cape Cod Symphony, and Brockton Symphony Orchestras. The brothers were born in Staten Island, NY and raised in Brooklyn and Pelham Manor, NY. They both attended Boston College, and currently reside in the NYC area (separately). For more information: www.WillandAnthony.com.