Why I Love Journalism The Amazing Hannah Matthews 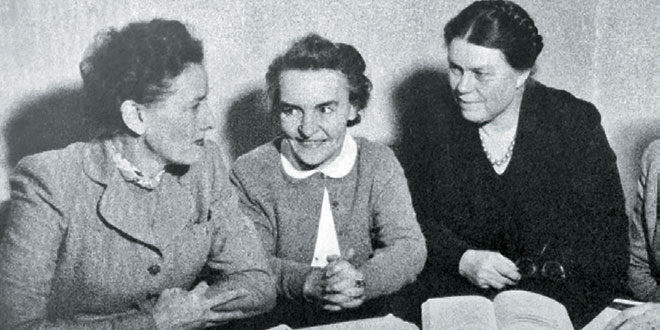 Mrs. Matthews (second from left) with her Swarthmore H.S. English Department in 1956. She is beaming at Mary Armstrong, her student at Doylestown H.S., who followed her to Swarthmore. Swarthmore High School Yearbook, 1956

I have been writing for Coastal Breeze News since March of 2015. Writing stories about people, places and things is something I have always wanted to do. That I have had some measure of success is due mainly to one diminutive woman – my high school English teacher, Hannah Kirk Matthews (with a nod to my editor, Val Simon, who has taught me a lot). Everything I have written for the last 60 years has Mrs. Matthews’ fingerprints all over it. The tributes paid to Mrs. Matthews upon her retirement were so remarkable that they were published in Readers Digest, Time Magazine, and in my hometown newspaper, The Swarthmorean.

Hannah Kirk Matthews was born on a farm near Doylestown in Bucks County, Pennsylvania, in 1900. She lived to be 93. She graduated from Goucher College, just outside of Baltimore, and then received a master’s degree from Columbia University. I imagine her degrees were heavily weighted in English literature. Her first job was teaching English in tiny Doylestown, Pennsylvania High School. One of her first students there was sophomore, James A. Michener. After a year or two at Doylestown, Matthews (then Miss Kirk) accepted an offer of employment from Swarthmore High School and began teaching there in 1926. “The school wanted her badly,” recalls Putty Willets, a colleague, “ [Miss Kirk] came highly recommended.” Swarthmore, then as now, was a leafy suburb of Philadelphia college town (pop. about 10,000). Michener would later graduate from Swarthmore College. It was a 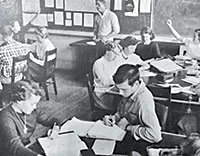 Swarthmore High School Yearbook, 1956Ed Collins giving a report on Theodore Dreiser in a modern fiction class. Knowing they will later have to write about this in anexam or paper, students take copious notes request further information from Collins.

plum position and Matthews jumped at the offer. She would head up the English department there until her retirement in 1965.

As her student in 1956, I recall her classroom being arranged with four large tables, each seating eight students. The tables were along either wall, leaving room in the middle for plays and recitations by the students. Mrs. Matthews spent most of her time wandering among the tables (getting personal) or standing at the back of the room watching what was going on in front. One student recalls that she would recite a line from a Shakespeare play and then ask from whence it came. Another fell in love with the sonnets of Keats, which were frequent homework assignments. Still another drew inspiration from the stack of New Yorker magazines she kept in the classroom. We didn’t know it, but we did a good deal of the teaching ourselves.

In addition to acting out Shakespeare’s plays, we would be called on to recite what we had read in our homework assignments and encouraged to correct our fellow students, both as to grammar and to content. Then we had to write about what we had read and heard. Our papers were always downgraded for incorrect grammar, punctuation and syntax. The subjects ranged from Hammurabi’s Code to the Gettysburg Address; Shakespeare to Arthur Miller; Chaucer to Hemingway, Steinbeck and Salinger; John Keats and Lord Byron to Longfellow and Ogden Nash. We had to get inside the authors’ heads, dissect their books, perform their 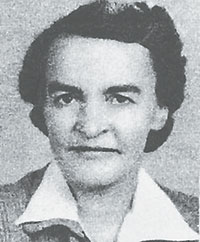 Submitted PhotoYoung Miss Kirk, known by that name until 1946, when she married Edgar Matthews, about whom, little is known. They had nochildren.

plays, and recite their poems. The process was never complete however, until we had reduced our impressions to writing – always writing. To this day, when I correspond with one of my classmates, I expect a concise well-written communication. I don’t recall ever being disappointed. By the spring of our senior year, we had become sated with the world of English literature and familiar with the communication techniques of the various authors.

Then, with just three months until graduation, she required us to write something original. It was the dreaded senior theme and it was a back breaker. It is the only term paper I have ever been required to write. “College English was easy compared to Mrs. Matthews’ classes,” a classmate recently told me. “I was excused from taking freshman English at UVA,” said another. He gives Mrs. Matthews the credit.

I learned that research and preparation is the sine qua non of journalism. She told us what she wanted, how it was to be presented, and suggested ways to go about it. I accumulated dozens of 3×5 cards with notes and citations from periodicals in the Swarthmore College library. The cards completely covered the double bed at home, next to my desk. I experienced a rush when it was done. It was a rush to be repeated many times during my career.

An article in Readers Digest caught my eye back in 1975. It mentioned Mrs. Matthews, a Pulitzer Prize winning author, and the president of the United States. I had 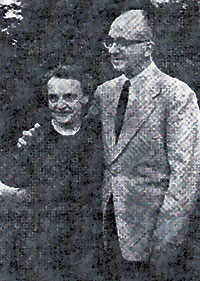 always been in awe of Mrs. Matthews and used the skills she taught me to write my way through life. After reading and rereading the article, I knew I had certifiable proof she belonged in the pantheon of great teachers. It certainly was “Exhibit A” of the influence a really good teacher can have on their students’ lives.

The culmination of Matthews’ career came on the evening of June 8, 1965, when 160 Swarthmore High School faculty, students, alumni and friends crammed into the sweltering Swarthmore High School cafeteria to do her honor. The Swarthmorean had earlier reported that a surprise guest would be present. It turned out to be renowned author, James Michener. The Readers Digest article reflected the loyalty and veneration this famous author had for her. As I recall it, the Digest reported that President Johnson was hosting a White House dinner honoring young authors (120 of them) for outstanding scholarship. Author James Michener had recently been awarded the Pulitzer Prize for one of his first novels, “Tales of the South Pacific.” He was, at the time, perhaps the best known and widely read American author. Understandably, this was the man and keynote speaker who President Johnson wanted at his right hand for such a dinner. The event was scheduled for June 8, 1965. The presidential invitation went out to Michener. Michener however, sent his regrets. The president, not accustomed to having his summonses refused, got Michener on the phone. From recollection, the conversation went something like this: 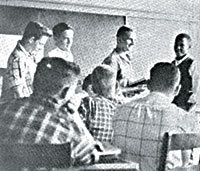 President Johnson – “James, this means an awful lot to me. We are all expecting you to be here. Couldn’t you possibly rearrange your schedule and come down?” Michener’s reply, over the phone, came from the heart and arguably constitutes one of the greatest tributes a teacher will ever get. Michener was reported to have replied, “Mr. President, we have had great presidents in the past, and undoubtedly will have them in the future. Very few of us however are privileged to have had a great teacher. My high school English teacher has had a tremendous impact on my life. Her retirement dinner is scheduled for the same night [as your event]. I have committed to it and intend to be there.” Time Magazine reported a similar quote made by Michener at Matthews’ retirement dinner – “In his lifetime, a man lives under 15 or 16 presidents, but a good teacher comes into his life but rarely.” And so, on June 8, 1965, rather than sitting at the president’s side in a glittering White House assemblage, James Michener showed up in Swarthmore High School’s small jam packed basement cafeteria at Hannah Kirk Matthews’ retirement dinner.

An anonymous Swarthmorean reporter did a first rate job of recording what happened there: “Mr. Michener said that Hannah Kirk ‘brought into our small [Doylestown High] school, a ray of light.’ [Michener] read from a letter of invitation from President Johnson to the White House dinner honoring the Presidential Scholarship winners, that same evening, and his

own telegram in reply, which said in part, ‘Your invitation was received just three days after I had agreed to speak at a dinner honoring the high school teacher who taught me how to write…Being a teacher yourself, I know you will understand…You will not miss me at your dinner; she might miss me at hers.’ It is a rare thing, Michener said, to meet a really good teacher. To hold her in regard these many years is an experience to cherish.”

These were not the last known sentiments which Michener had voiced about his favorite teacher. One of my classmates recalls meeting Michener on two occasions, in 1978 and 1982. “I asked him about Mrs. Matthews [on both occasions],” the classmate said, “[Michener’s] response came immediately and with little pause. His words were to the effect that ‘I would never have achieved success without her. You know, I should probably write and tell her that.’” There are many of us with the same sentiments.

In her 40 years of teaching, about 4,500 high school students have passed through the classroom of Mrs. Matthews. Most of us are avid readers and confident in our speech and written word. These qualities have enriched our lives. To hold her in regard these many years is an experience to cherish.

Barry was a practicing attorney before he worked as a Special Agent of the FBI for 31 years.  Barry worked for several government agencies another ten years before retiring to Goodland in 2006. Barry is presently the Secretary of the Goodland Civic Association