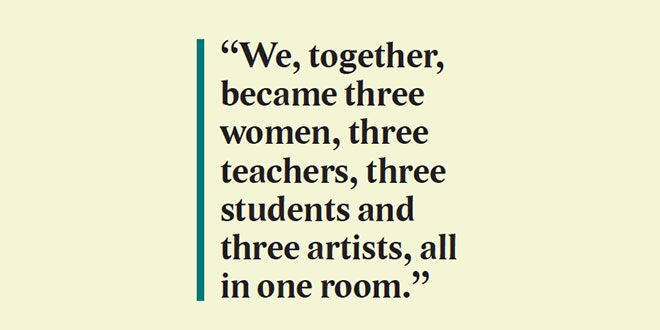 Have you ever dreaded something that turned out to be wonderful? Of course you have, it’s part of the whole human experience. I suppose, likewise, we have all looked forward to things that in the end fell short of our desires — but that’s not for today’s discussion. I like this lesson much better…

Once upon right now, I teach drawing at Marco Island Center for the Arts, and have for three years. I have always preferred the larger classes because I believe it can be vastly rewarding to students when they interact with a multitude of students, share their learning experiences, and give each other courage, hope and forgiveness. Like all good teachers (and I do consider myself one), my students’ progress is my greatest satisfaction.

Because of this I have set a minimum student number at four. I’ve found that to be a good start for lively discussions — and the more the merrier! A little variety is an excellent ingredient for cooking up interesting views. We meet four sessions a month, two hours a session: some lecturing, a few demonstrations, a wee bit of slide-viewing and a whole bunch of drawing, well-laced with fresh discussions.

Last month, I reluctantly agreed to teach for just three students. It was an advanced course, so maybe I could still incite some strong converse. On the first day, I was told one student had dropped out. Now I was officially disappointed. People tend to open up easier in larger groups maybe because the odds are better of finding a like mind. Also, in small groups, they tend to be needier of teacher attention which can often dilute their own personal discoveries. Yes, I was all a-gloomed.

First session went well enough — introducing ourselves and describing our artful experiences. I also was fortunate to bring along a visiting artist who not only added to the discussion, but also agreed to model for my students. Great luck! Nothing like a live model to keep things interesting.

During the second session, I set up a rather complex still-life comprised of only white objects. It was a study for values (lights and darks), and I thought I could rattle their perception processes by asking them to draw without lines, to just put down the individual shadow-shapes in relation to the entire composition. My two students, both women — as different from each other as I to them — looked equally “rattled.” As I often do, I reminded them not to strive for a successful drawing, only a successful learning experience. With just a little hesitation they commenced the assigned task with professional determination, although perhaps not a whole lot of faith.

Early on, one woman asked me about the Goodland Arts Alliance, particularly about the set of historical fishing cottages the GAA is hoping to convert into a permanent home. Excellent topic! As president of the GAA, I am well-versed in (and extremely fond of) this subject; and she, it unfolded, not only had a passion for historical preservation but also vast experience in fundraising and not-for-profit organizations which she shared most graciously. All the while, her pencil seldom left her paper.

When I brought up the concerns I had about the cottages being on Collier County property and the difficulties in negotiating a proper contract that would benefit — and protect — both entities, the second woman, a semi-retired attorney, not only warmed to the discussion, but was also offered a wealth of generous information and advice. Her pencil also remained diligent while she spoke.

While the clock did it’s ticking, pencils swept over paper, and our conversation sensibly and sensitively evolved.

That’s when I witnessed a tiny phenomenon. At first, while they spoke and drew, I continued to attend their drawing progress (it was, after all, my job), but I answered their questions and discovered several of my own to ask. Gradually, as these bright and accomplished women drew upon their own expertise and confidence, a beautiful suredness passed through to their drawing. Their bodies visibly relaxed; their movements became fluid and instinctive. Mentally they were in their element, and when one is in a place that is comfortable, nothing seems insurmountable. At this point, they scarcely needed my input.

By the end of our session, I was, perhaps, asking for more information than I was actually giving, and I learned a lot. But they both ended up with two amazing drawings: accurate, cohesive and graceful. We, together, became three women, three teachers, three students and three artists, all in one room. I felt as though we had touched magic.

And what did I learn from having expected less than an experience offered? Always keep your hopes up. How lovely.