When Will Serena Come to the Circle? 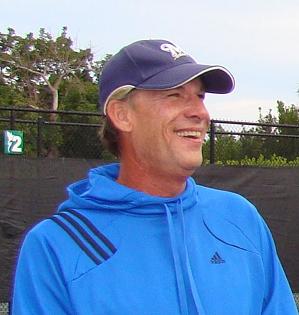 I heard tennis psychologist, Dr. Jim Loehr, first describe the circle of responsibility almost 25 years ago.  In simple terms, he wanted all of his athletes to be fully engaged in their matches and be prepared to stand in the box and take 100% responsibility for their efforts.  As Dr. Loehr broke the circle down, he explained using Jim Courier (one of his students at the time) as an example.

If Courier were standing right in the middle of the box, feet inside the boundaries, he would describe a hypothetical match in the following terms: “I played my heart out today. I moved well, served and returned well, but my opponent was just too good on the big points. Congratulations to John Smith and I wish him the best for the rest of the tournament.”

However, if Jim stood in the box with ONE foot outside the circle, he might  describe his loss differently: “I played well today but I thought the opponent got all the breaks. If he didn’t get those two let cord winners, I clearly would have prevailed.”

Furthermore, if Courier had both feet OUTSIDE the circle or box, he would offer the following in defeat: “Even though I played reasonably well today, I knew that I would lose because I did not sleep well.  Moreover, the sun always shone in my face when I was serving and it was not possible to hold serve.  Other than that, he had more let cord winners than I did, so what can you expect?”

Finally,  if Jim stood completely out of the circle, literally a hundred feet away, he might spin quite a tale after the match: “Oh my, I wondered why I even laced up my sneakers today as I didn’t practice once the entire week before the event.  After a horrendous night’s sleep or maybe two hours at best, I hurried to the match without eating one single morsel of food.  Drained, exhausted and lacking any physical or mental energy, I half-way competed for an hour plus before defeat.  Anyone who knows me realizes that it wasn’t my fault and I am certain that I would be the winner under normal circumstances,” he might say in defeat.

As I tuned into the 2010 Australian Open Grand Slam tournament, the announcers teased me about their upcoming interview with American tennis star, Serena Williams.  I was curious to see if Serena was a changed person after her historic Grand Slam fine involving her meltdown against Kim Clijsters in the Semi-finals of the 2009 US Open.  During her post-match news conference in Australia, the following exchange occurred between Serena and one of the tennis writers.

“The last time we saw you in a Grand Slam there was that little incident in New York. How’s your anger management coming along,” the journalist politely quizzed Serena.

“I don’t think it was anger management – was it anger management? How’s your writing coming along?” Serena countered.
“Just fine, thank you,” he answered.
“Ditto, kiddo,” Serena responded.

When Serena Williams does not have a prepared statement she is rather flippant and disrespectful. Moments later, she sat down with ESPN tennis host Chris McKendry and discussed her incident and eventual fine. Sadly, she said that she felt she received more negative attention and a heftier fine because she is a woman athlete.  Again, Serena Williams was unwilling to take responsibility for her actions and possibly more disturbing, she deflected her own accountability by shifting the blame to her being a female athlete.

Ironically, on the day of this story, Australian Open viewers again heard a old sad fact that occurred approximately twenty years ago:  “On January 21, 1990, at the Australian Open in Melbourne, American tennis player John McEnroe becomes the first player since 1963 to be disqualified from a Grand Slam tournament for misconduct.”  When temperamental McEnroe forgot the exact default rules, he took his arguments one-step too far and was thrown out.  With old news about John McEnroe’s bad court behavior, Serena Williams’ gender argument just rings shallow and I doubt any tennis fans are buying her weak opinion.

Serena more than crossed the line with the lineswoman. She must learn to take her lumps, apologize. and move on. However, when her handlers were involved, she offered the following: “I just really wanted to apologize sincerely, because I’m a very prideful person and I’m a very intense person and a very emotional person”.

All of today’s athletes who get into hot water turn to their P.R. machines and try to spin favorable responses.  When will  they learn that Americans are forgiving people who only want stars to come clean?

Tennis aficionado Chuck Openchowski of Bethesda, Maryland suggested this explanation for Serena Williams: “In no way were my actions on court against Kim Clijsters acceptable.  I lost my temper and acted inappropriately and can only blame myself.  I have already learned a great deal through this adversity and I have grown tremendously.  Please forgive me.  Thank you for your kind consideration.”

To me, Mr. Openchowski, once a promising junior tennis star and now a weekend warrior tennis nut, wants our athletes to come clean about their actions so we can regain our faith in them.  When our star tennis players act without consequence, it clearly trickles down to our local tennis leagues.  At a recent junior doubles match, I overheard one competitor following defeat: “My partner choked every big point.  No wonder we lost the match.  Heck, I played great.”

Unless people stand up and finally take some responsibility for their performances and admit their shortcomings, expect more of this boorish behavior.  My dream for any athlete is to adopt Dr. Jim Loehr’s Circle of Responsibility when competing in a tennis match.  Whether it is a local CTA tennis player or USTA tournament competitor, I challenge you to have full accountability after the match:stand right in the middle of the circle and tell the truth.

Doug Browne, who is beginning his 26th year as Director of Tennis at the Hideaway Beach Club on Marco Island, has been associated with the USPTA for 25 years, and had been playing, talking, and teaching tennis for most of his life.