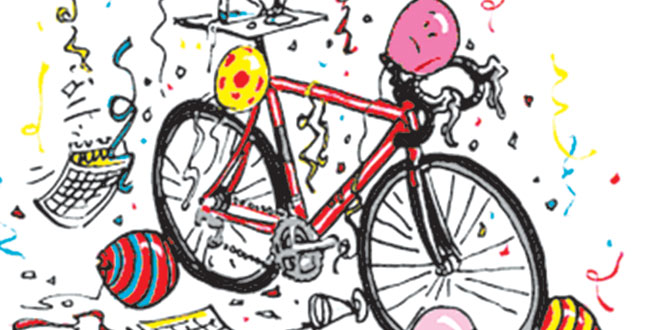 If you are reading this, either the world didn’t end, or you snuck out of your bunker and hopefully pedaled your bike to the closest newsstand and grabbed this issue of Coastal Breeze. Whatever the reason, I am happy we are all still alive and you have found the time in your renewed life to read my article.

As I look towards 2013, and reflect on 2012, I think about all the bicycles I see, whether on the back of cars, in bike racks, at stores or schools, and the hundreds of people I see pedaling them. It seems everywhere I go I notice a lot more people riding bicycles, more and more each year it seems. And that’s great thing. When I see people riding, I always ask myself, why they are riding? Where are they going? How long have they been riding?

For some it’s obvious, where as others it takes some pondering. I can pretty much tell when a person is riding to work, although sometimes a bicycle “commuter” will be dressed as if they are racing or doing a long distance ride. Cyclists that are in groups are usually a good indication of some sort of training ride, either for a race or a charity event. The easiest at times to notice is the casual rider; it just looks as though they are out for some exercise and some peace of mind.

I love seeing people on bicycles. One, because I am still fascinated with them. But also, because most people know the health benefits they get when riding a bicycle. The fact that they are somehow helping the environment and saving a ton of money on fuel is just a bonus, whether they know it or not. I am happy to see bicycles pedaling their way back into society.

Looking back at 2012, there were a few key things that pop into my head about the year in cycling. The first and the most obvious, even to anyone who knows nothing about cycling, is the “fall” of Lance Armstrong. The Lance issue could be discussed for days: Was he really guilty? Did he cheat, and why? How could he pass over 300 drug tests and still be found guilty? I could go on with just the questions, but the one thing in the whole Lance debacle that is a constant is that he raised a lot awareness and money for cancer research and to me, it seems that simple.

The last thing that really sticks in my head this past year was my trip to Las Vegas for the annual bicycle industry meetings and show. That’s two years in a row that I came and left with the same amount of money, but with a head full of knowledge. Once again, I saw some amazing new products: led lights for your wheels that can display multiple pre selected objects or even your own slogan if you choose; new super-light bike frames, some weighing less than 14 pounds; and the newest advancements in electronic shifting use some really amazing technology. There were many fascinating products and advancements made in bicycling this past year and it has me looking forward to the coming year.

Matt Walthour, a Marco Island resident since 1985 is a graduate from Embry Riddle Aeronautical University, and is the owner of Island Bike Shop and Scootertown on Marco Island and Naples. He is also a member of the Marco Island bike path ad-hoc committee.