What’s not to Love About Warm-Hearted Alligators? 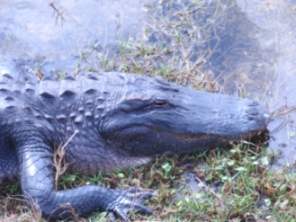 February is the month for romance and Valentine hearts, so who would have thought an alligator would make headlines as warm-hearted?  This cold-blooded reptile is a topic for St. Valentine’s Day?  You bet!  The American Alligator (Alligator missippiensis) that we see in the Everglades, and occasionally in the canals of Marco Island, like all crocodilians, has a four-chambered heart, a trait shared with mammals and birds. Most reptiles, lizards, snakes and turtles, have 3-chambered hearts, but the more complex heart structure in the alligator allows a lower metabolic state, enables it to dive for long periods and indicates it might have evolved from a warm-blooded ancestor more closely related to birds.

Warm-hearted alligators will not want chocolate or roses though; with their very strong jaws, they would prefer to crack a turtle shell, snap up frogs, snakes, fish, birds and mammals for their Valentine treat.  The carnivorous reptile is an opportunistic feeder, preying on any abundant or accessible species, using their sharp teeth to catch and hold prey. Most prey is small enough to swallow whole or shaken apart. If it is too large, the ‘gator will bite down and spin on the long axis of its body to tear off parts to swallow. This is known as a ‘death spin’.  Not exactly the type of Valentine embrace you would want to receive!

Alligators live to be about 50 years of age, reaching sexual maturity when they are 6-7 feet in length.  The smaller female could take 10-15 years and the male 8-12 years to reach maturity.  Courtship begins in early April with eggs deposited by the female in late June in a large mounded nest of soil, vegetation, and debris.  About two months later, in September or October, the approximate 35 eggs will hatch.  Well, here is where the Valentine story ends: of the 35 eggs that hatch, 15 hatchlings will emerge from the nest; only 6 of these will live to reach one year of age. Of these, five will reach four feet in length (subadults); and only four of these will reach sexual maturity, or six feet in length. If the population of alligators that the hatchlings emerge into has a larger amount of large animals, the survival rate is lower due to the high rate of cannibalism. These warm-hearted reptiles just can’t resist eating each other.

Alligators prefer fresh water in slow moving water systems like swamps, marshes, and are very commonly seen along drainage ditches in South Florida.  They can also be found in brackish to salt water for short periods of time, although 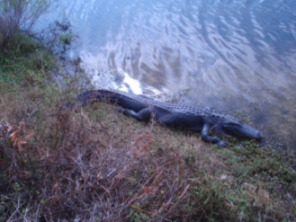 without salt glands, their tolerance is low.  Occasionally, there will be one or two spotted in the Marco River and canals of Marco Island. This is more common after heavy rains, warmer waters. You may even have been lucky enough on the Marco Island beach to have witnessed an approximately six-foot alligator rolling in the surf.  Disoriented, most likely brought around to the beach by tides and currents, the alligator was removed by a trapper.

Alligators are fascinating, historic creatures that can be enjoyed as part of the natural beauty of South Florida. They play an important role in the Everglades ecosystem. The Florida Fish and Wildlife Conservation Commission estimates there are approximately 1.25 million gators in Florida – (Note: This number does not include the University of Florida ‘Gator fans!). A few precautions on our part can help us co-exist safely:

Nancy Richie is the Environmental Specialist for the City of Marco Island and may be reached at nrichie@cityofmarcoisland.com.

Nancy and her husband Michael, have lived on Marco Island since 1992; they have two daughters, Madeleine and Camille. With a Bachelor of Science degree in Marine Biology from Texas A&M University at Galveston, she was the microbiology analyst for an environmental laboratory, Enviropact, and then a hazardous waste inspector for the Collier County Pollution Control Department before becoming the City’s Environmental Specialist in May 1999. In 2005 she received the Guy Bradley Award from the Collier County Audubon Society for her stewardship of Marco Island’s environment.  A few of her duties at the City include: vegetation trimming permitting, beach vendor permitting, protected species monitoring, water quality monitoring, staff representative for the Beach Advisory Committee, and a liaison with federal, state, county and local environmental agencies and groups.