‘What Happened to Ochopee?’ 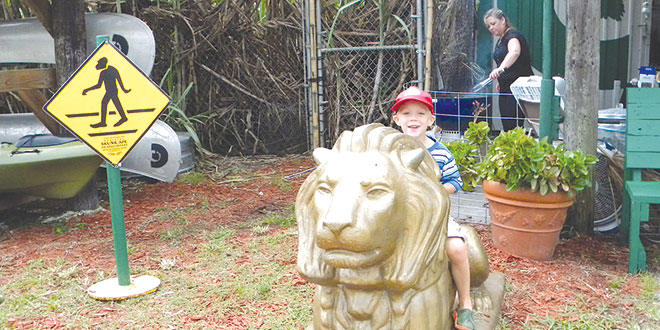 A future explorer rides the lion that guards the door, painted gold in honor of the Golden Lion Motor Inn.PHOTOS BY MELINDA GRAY

Southwest Florida’s history is rich with accounts of rugged pioneers and adventurous prospectors searching for places to settle and on which to build thriving, prosperous enterprises. One such person was James Gaunt.

In 1928, Gaunt bought 250 acres of swamp land along the then brand new U.S. 41 and set his sights on farming the land. His produce would be tomatoes, and a thriving Everglades community dubbed Ochopee grew up around Gaunt’s farm.

Unfamiliar with Ochopee? Drive east down U.S. 41 towards Miami, and just three miles past the intersection of U.S. 41 and State Road 29, you will see a small building resembling a storage shed. That is the Ochopee post office — 34141. Known as the smallest post office in the United States, it is a fully functional post office and serves the surrounding populations of Miccosukee and Seminole Indians. 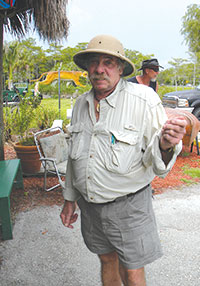 Local resident and Vantastic Tours guide,Nile Duppstadt. Trail Lakes Campground is one of their most popular tour stops.

Campground, Skunk Ape Research Center, Everglades Chickee Cottages and Everglades Adventure Tours — are pretty much all that are left of Gaunt’s dream.

So, what happened to Ochopee? That is the question Ochopee native and author Jeff Whichello asked in his first book, “What Happened to Ochopee?” On a cloudy day in July, many fans of Ochopee congregated at the Trail Lakes Campground and Skunk Ape Research Center to meet with Whichello, have him sign copies of his book and regale him with stories from days gone by.

It was a backyard barbecue, block-party style gathering, complete with hot dogs on the grill. Everyone knew everyone else, and one visitor even brought an old Everglades City School yearbook to look through with Whichello.

Whichello’s book is his love letter to a childhood filled with adventure, native wild life discovery and time spent in exploration of his Florida Everglades home. His family ran the Golden Lion Motor Inn, an epicenter of local get-togethers and community gatherings

Sat., July 26, brought a cool breeze, cloud cover and a local crowd to celebrate Whichello’s book, ‘What Happened to Ochopee?’

in its hay-day. He tells stories of the motel pool, a cool oasis open to the public free of charge; tailgating and football-watching parties; even the occasional celebrity just passing through.

Whichello explores the rise and fall of his home town through first-hand experience, extensive research, eye-witness accounts and historical documents pictured throughout. The beginning of Ochopee’s end came in 1968, when construction began on what was intended to be the biggest airport in the world, right in the middle of the Everglades.

Environmentalists rallied to stop the project, and with the aid of few influential politicians, they succeeded. Whichello details the hearings and meetings that tell of the ongoing battle waged between locals and the powers that be.

Unfortunately, the situation shifted momentum to the opposite, but equally extreme, side of the political spectrum invoking a subsequent report from the National Academy of Sciences suggesting curtailing the impact of development by preservation of land surrounding what is now Big Cypress National Preserve. 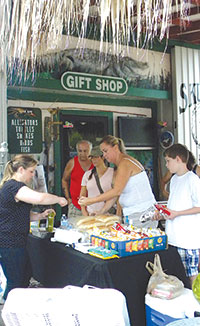 Refreshments were served. Visitors enjoyed grilled hot dogs and all the fixings.

they say, is history; one by one, residents were squeezed from their land as the fist of the government tightened around them. Among the long list of casualties, Whichello’s family business, a motel, restaurant and bar, was claimed and then converted into what is now Big Cypress National Preserve headquarters.

Still, Whichello pines for the days when the swamps and canals served as his playground; when as a child, he and his younger sister was often left to their own devices while their parents built and ran their motel and restaurant; when the children made their own adventures, becoming acquainted with the local wild life around them and fighting off boredom with young imaginations. Whichello remembers leaving his own trail of tears as he watched his family pack up and move to Brandon, near Tampa, as his parents and many other business owners were forced to shutter their storefronts and homesteads as Ochopee slowly began to fade.

And, even though he lived and worked 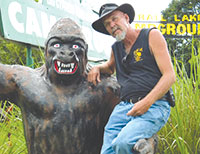 Dave Shealy and his Skunk Ape Research Center is planning an expedition to track the legendary man-beast later this year.

in New York City and then in Alabama for a combined six years, he always maintained friendships and his connection to the land with regular visits to the Everglades.

These days, he is working to put the wealth of stories in his head into book form. He feels he was successful with his first attempt — “What Happened to Ochopee?” — and he hopes his next book, detailing the whole story of Golden Lion Motor Inn, will be finished by next year.

“I’ve spent my whole life writing, but never have I finished an entire book,” Whichello explained. “As of Jan. 15, 2014, it’s not just finished and sitting in my closet, it has been put into a format they call print. Now that it’s been done, I find myself going back through the other 50 or so books I started but never pursued. Is it possible that I might find them homes as well? I don’t have 20 more years to wait. I have to pick up the pace.”