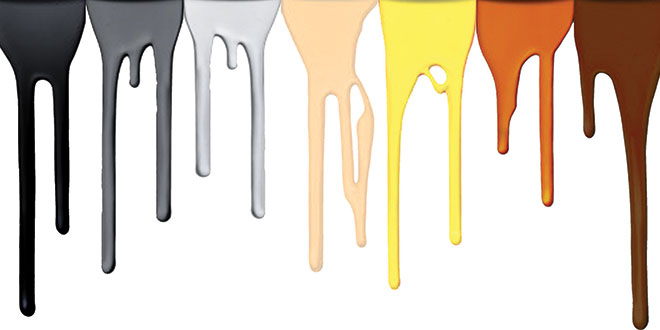 Wet Paint Live has been an annual fixture on the Marco Island art scene since 2008.

But this year’s installment of the fundraiser is one that stands out for Sandi Riedemann, executive director of the Marco Island Chamber of Commerce.

“It was beyond anybody’s expectations,” said Riedemann of the event, which blends plein (open) air painting with an evening cocktail party and live auction to benefit the chamber’s Leadership Marco Scholarship Fund.

At 15 select locations scattered around Marco and Goodland, local artists applied paint to canvas one day last week, capturing what was before their eyes, with their creations going under the auctioneer’s gavel that evening.

Live, which benefitted five high school seniors. A total for this year’s event was not available at press time.

The auction was practically a standing room only, with attendees enjoying hors d’oeuvres and libations, and reviewing the day’s artwork before auctioneer Chris Lombardo began his humorous inducements to bid, bid, bid.

“It was a really good night,” said Riedemann. “Everybody had a lot of fun and there was some beautiful, beautiful art there. Every artist put love onto their canvas. They’re just so happy to do this because they know they money goes for scholarships to deserving high school seniors from Marco Island, the Isles of Capri and Fiddlers Creek.”

That reason, plus the opportunity to promote the

She stood outside a home on San Marco Road, depicting its exterior, with the water view she has from the art studio in her Goldcoast Court home the actual view through the home’s windows.

“I’m creating my view, my dream,” said Pransky, who teaches painting at the Marco Island Art League and at her studio.

The art created was a varied as the approaches favored by the artists, whether it be realism, Impressionism or post-Impressionism.

William Ward Moseley said he was influenced by the Impressionists, as he happily worked away outside Stan’s Idle Hour in Goodland.

“I try to not copy what you see, but what you 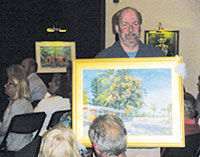 Gail Trent Risner’s painting of the Goodland Post Office is shown to the audience as it goes up for bid.

feel,” he said. “Monet and all those folks like that were the foundation of Impressionism. Also, I lose patience, so I try to work quickly. If I spend more than two hours on a painting, it’s been too long.”

Lee Horton, enjoyed the weather and chatting with curious passersby. He was painting what he described as a “Key-Westy kind of, bright orange house,” located off Pear Tree Ave, while sitting in MarGood Harbor Park.

He checked out all 15 locations established for Wet Paint Live 2015, before selecting that spot. “I just thought this would be comfortable,” said Horton, who teaches art at Marketplace Mission Learning Center on Marco, a small private school. “I’m in the sun.

Lee Horton considered a number of locations before this home located across from MarGood Harbor Park caught his eye.

It’s not too cold. It’s just a perfectly beautiful day.”

Victor-Hugo Vaca painted waterside, on the dock behind the Boat House Motel, located off Edington Place.

His piece, entitled “News Press: Public Trust” depicted two colorful, cartoon-like figures cavorting alongside the Marco Cat. The work’s whimsical appearance is in contrast with what inspired Vaca – a negative experience he had last year at an art related fundraiser in Fort Myers.