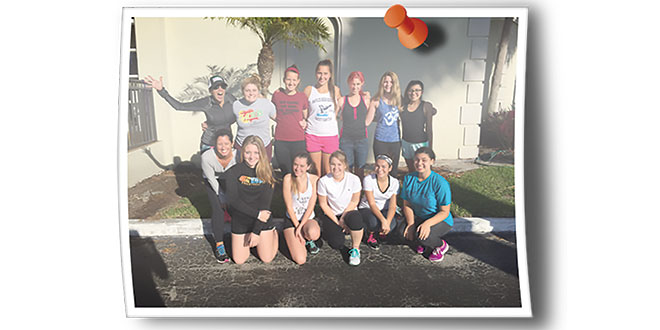 Alexis Buhelos embarked on a bold journey of self discovery last year that brought about some life-altering changes for the then 14 year old.

The Marco Island resident and a group of other teen girls from Lee and Collier counties devoted five months of their lives to expanding their fitness, empowerment and leadership skills through the Naples-based Wellfit Girls Program.

Created in 2014, the Wellfit Girls Program is dedicated to inspiring girls between 13 and 18 years old to maximize their potential through regular group meetings and a rigorous regimen of yoga, fitness and leadership training. That process prepares the youths for what comes next, a ten-day expedition to Peru for intensive cultural immersion. The excursion includes a three-day trek through the Sacred Valley and up to more than 15,000 feet and culminates with a 7,972-foot skyward trek to the ancient Incan city of Machu Picchu, one of the new Seven Modern Wonders of the World.

They are joined on the mountain expedition by 10 Peruvian teen girls, who are integrated into the group and help introduce them to life in that country.

“It changed my life, it really did,” said Buhelos, a sophomore at Lely High School. “It just helped me to see that I’m more than I believed myself to be and that it’s not ever impossible to make a difference, that no one has to be stuck in this place they’re in, that they can make 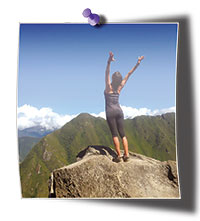 Jill Wheeler rejoices at the summit of Huayna Picchu, the peak that rises above the ancient Incan city of Machu Picchu in Peru.

a difference, that nothing is out of your reach. It just opened me up to having a better self image.”

Wellfit Girls was created by Jill Wheeler, a mental health counselor, yoga teacher and fitness enthusiast who is also the founder of the Wellfit Institute in Naples, which offers fitness classes, wellness and empowerment coaching, workshops and adventure travel excursions.

Wheeler, of Naples designed the Wellfit Girls Program to challenge the teens on all levels as a means of helping them develop the coping skills and drive necessary to overcome obstacles, whether it is those they face today – body image and self esteem, bullying, eating disorders or substance abuse – or the issues that can arise later in life.

Those issues can be a part of any teen girl’s life, regardless of their socio-economic circumstances, she said.

The physical tests, such as the mountainous climb to Machu Picchu, serve as a metaphor for the skills required to overcome life’s difficulties.

“The goal is to inspire and empower each girl while nurturing and developing each girl’s individual leadership style,” according to Wheeler. “We are building strong women to be our future leaders.”

Wheeler is a Connecticut native whose comfortable upbringing did not shield her from the angst and alienation that can plague teens. “I didn’t have a real outlet for my unique way of being,” she said. “I grew up in New England and we were supposed to be conservative, but I was

a bit outside of that.”

Long drawn to the outdoors, as a young adult Wheeler moved out West where she found herself contending with the fear and uncertainty that can be part of the human condition. She decided the solution lie in what she called “the ultimate journey,” a solo backpacking trip in the wilds of Wyoming, which she undertook in 1994.

“I had the skill and strength, but also I had the knowledge,” she said. “When I was out there, I realized how empowering a solo trip was and I wanted to provide that for people in life, a vehicle for transformation. I left the ordinary world and stepped into the unordinary world. It was beyond comfort to find a bigger part of myself to overcome fear.”

Wheeler was leading a wilderness excursion with a group of adolescents about 15 years ago when the idea of starting the program that became Wellfit Girls began to take shape. The group was a mix of wealthy and less materially advantaged teens, who found themselves challenged when a torrential rain storm hit.

“I realized it (nature’s challenges) was the ultimate leveling of the field because everybody was dependent on one another,” she said. “There was no advantage to having wealth. There’s no advantage to anyone when you’re out in the elements in the wilderness. I think that can be empowering and humbling at the same time.”

The 11 girls began preparing in January for 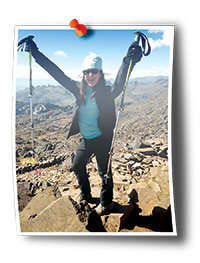 Alexis Buhelos shows her joy at reaching the summit.

this year’s trip, which begins June 8. They meet twice a week, including one-hour long sessions with personal trainer Andrew Miranti of Total Athletic Performance at the Naples Bath and Tennis Club.

Wheeler and Miranti will accompany the girls this year, along with Colby Robertson, program director for Wellfit Girls and a former journalist with WINK-TV.

Buhelos said that although the opportunity to travel to Machu Picchu interested her initially, it took awhile before she was truly excited by the prospect of making the trip.

What was muting her sense of anticipation?

“My mentality because I was not in a good place mentally and I was telling myself I couldn’t do it,” said Buhelos. “It was just something that took a bit of time. I was surrounded by a group of people. Just being there and knowing that did it. I overcame it.”

Buhelos said that as the process unfolded, the girls developed close bonds, ties that grew stronger during their Peruvian experience. “We were like family during the trip and we still are,” she added.

Last year’s journey to Peru was filmed and turned into the feature-length documentary “Warrior One,” which has screened locally as a fundraiser Wellfit Girls, as well as elsewhere in the country. The documentary is intended to serve as an inspiration to girls around the world.

Wellfit Girl’s Program is in the process of obtaining its nonprofit status, so it is 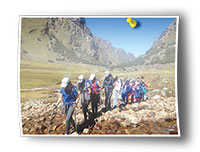 a partner with local non-profit, the House of Gaia Community Learning Center in Naples, for this year’s excursion.

Robertson said Wellfit Girls is holding fundraisers all spring because while it’s hoped parents can contribute to the $5,000 per-girl cost for the program’s training, travel and expedition, not all of them can.

“So we’re looking to raise at a minimum $50,000,” she added. “We are constantly looking for corporate sponsors and private donations.”

There are three upcoming funders over the next month:

For more information about these events, contact Colby Robertson at 529-0366.