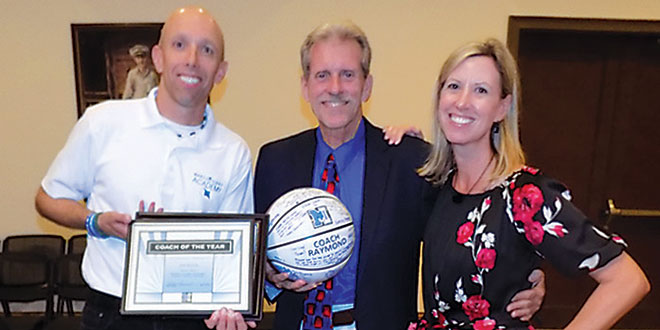 Coach Jim Watt holds his “Coach of the Year” award. Roger Raymond and Board Chairperson Jane Watt (Jim’s boss at school and at home) look on. Raymond holds autographed basketball from the MIA boys’ basketball team. PHOTOS BY BARRY GWINN

On February 17, Marco Island Academy (MIA) held its Winter Sports Awards Ceremony. The cheerleading team, boys and girls basketball teams and boys and girls soccer teams were honored. Last up on the podium was Jim Watt, the girls’ varsity soccer coach for the last two years. Kelly Monnot, MIA’s athletic director, recognized him as Winter Sports Coach of the Year. I have been following and reporting on this gritty bunch of girls, and have been impressed by their progress over the last two seasons. Even more impressive was the commitment and dedication of Coach Watt to his team. I have been present at most practices and their home games. I count Jim as one of my close friends.

Jim Watt has been coaching this team since the fall of 2014. He also coaches his children’s 3 on 3 soccer teams. He offers his services to MIA on a strictly volunteer basis and has paid for much of the team’s equipment out of his own pocket. Watt is also national sales manager of a wholesale commercial lumber company, Kings Company, based in Ohio. He works out of a company office in Marco Island. His job requires him to stay in contact with and visit clients and potential clients all over the United States, solving problems and expanding the business. When not coaching the team (or his kids’ teams), Watt is in his office or on extended business trips enroute to clients from Georgia to Arizona. During soccer season, Watt arranges his business schedule so as not to interfere with practices and games. I have known him to deplane from business trips at Fort Myers and rush back to Marco Island directly to a practice or game. He gets

The MIA girls’ soccer team, as I have never seen them. With this chic group, who will ever notice the beaming Coach Watt in back?

to Mackle Park early (sometimes an hour and a half beforehand) to set up for practice. While laying out cones or wrestling with the erection of practice goals (there are no regulation size goals at Mackle Park), Watt is simultaneously talking on his cell phone with customers and staff solving problems and trying to keep his clients happy. The cell phone is turned off only after the girls arrive and practice begins. To my knowledge, Watt has never missed a practice or a game.

His practices are crisp, fast moving, and well organized. He accounts for every minute in a meticulously prepared plan before each practice. Watt, who never played soccer, has become an ardent student of the game and is now a pretty good player also. I have watched as he imparts his knowledge to the team and infuses them with his passion for the game. They pay close attention and then practice full bore. At times, Watt has also had to act as a mentor or father figure for some of the girls who become stressed because of perceived problems off the field. He has handled these situations with aplomb, often acting as intermediary, supporting his girls, rubbing balm on the wounds and avoiding major hurts and distractions. Through it all, Watt is consistently upbeat and optimistic. He is definitely not a glass half full guy. He thinks his glass is always full. “Coach Watt is the glue that makes our personalities stick together,” says intrepid defender Julia Cartwright, “He is the reason we are able to remain optimistic and function so well together as a team.”

Watt was visibly moved when receiving his award. “Jim Watt is a tremendous leader, who has helped build the girls’ soccer program 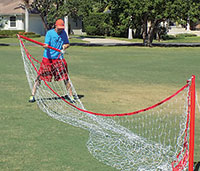 Setting up for a practice, Coach Watt wrestles with a goal net while solving business problems on his cell phone. Watt uses earphone plugs and a mouthpiece. He usuallywears Cleveland Browns or Cavaliers paraphernaliato his practices. Here, a Browns hat is visible.

from the ground up,” Athletic Director Monnot told the audience, “He truly demonstrates the meaning of team. He is passionate about the sport, but more importantly, committed to his athletes.” Monnot noted how Watt takes time to serve as mentor to the other coaches, particularly when it comes to developing a successful program for their teams. “Coach Watt understands what it takes,” continued Monnot, “and is dedicated to doing so. We are fortunate to have him on our coaching staff at MIA.” When Monnot had concluded her remarks, the girls rose to their feet and applauded their coach. I could see more than approval in their eyes. They were palpably, unashamedly happy for Coach Watt. Apparently Jim and I were not the only ones tearing up that night.

Coach Watt, as is his way, deflected much of the credit to his girls. He says he was “shocked, honored, and humbled” to receive the award. If so, he was probably the only one in the room who was shocked at this turn of events. “The awards ceremony was great,” he told me, “It was a good ending to a fantastic season. I loved every minute of it.” “And,” he added, “I love my girls.” Watt was proud of the fact that everyone on the team lettered this year. He felt they all deserved this honor. “It is hard playing at a school with a smaller student body (235 at this writing),” he said, “There is a lot of playing time and opportunities, but sometimes it is exhausting.” Earlier in the season, I shared the coach’s joy at winning the first soccer match ever at MIA. It was followed by three more wins, plus two ties with a seasonal record of 4-2-12.

Coach Watt calls a timeout in Southwest Florida Christian home game, December 7. MIA went on to win this one in a 4 to 3 nail biter.

Some of the losses could have gone either way. All the games I saw were competitive and fun to watch. In the prior two seasons of their existence, MIA took some terrible drubbings with no wins or ties to show for it. “After being the doormat of the district last year (Watt’s first as coach), I think we have shown some teams that we are just not going to lay down. Next year is going to be even better,” Watt predicted.

Watt bridled at only being given three school awards to hand out to his team. “I wanted to recognize the eleven really dedicated girls who I could count on to be leaders at practice and play hard during the games,” Watt said. He made coaches awards to these players as follows:

Among this group there is one who started the season inconsistently, at times seeming uninspired and unsure of herself. As she struggled through the early part of the season, Coach Watt worked with her and showed unflagging confidence in her. It paid off in spectacular fashion. Kayla Kladis was in goal for every game and was the most improved player on the team. She is going to win even more games for MIA next year. Kayla echoed Athletic Director Monnot, “Coach Watt definitely deserves Winter Coach of the Year because he’s passionate, enthusiastic, and puts so much effort into our team. He makes sure that anyone who needs help receives it. He doesn’t just help to improve an individual on the team; he helps to improve the team as a whole.” Nicely done, Kayla.

Next year even better? I can’t wait.