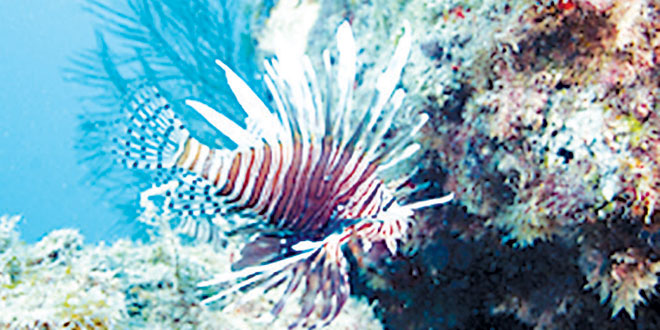 Wanted! Lionfish! Dead or alive! This invasive species has been spotted in canals around Marco Island, as well as in off-shore waters. The city’s Waterways Committee, chaired by Jim Timmerman, brought the issue before City Council in February, alerting members to the problem fish, and was given the go-ahead to “move forward” in creating a solution. Waterways member Rodger Parcelles pointed, out the “unique situation” being in the 10,000 Islands and the threat of this non-indigenous species taking hold, at the Waterways Committee recent meeting. Raising public awareness through informational signs, obtaining information from other Florida cities and Florida Fish and Wildlife experts and inviting members of local fishing clubs were several ideas suggested by Waterways member to jumpstart the initiative.

The Florida Fish and Wildlife Conservation Commission has information on its website regarding the lionfish and advises anyone who sees or catches one, to report it to their agency using the Florida Lionfish App on their “smart device” or by visiting MyFWC.com/Lionfish and clicking on lionfish.

While beautiful to look at, lionfish pose a serious threat to saltwater fish and wildlife. Conservation agencies encourage divers, fishermen and commercial harvesters to remove lionfish from Florida waters to limit negative impacts on marine life and the fragile ecosystem. They are currently found in the waters of the southern Gulf of Mexico and southern Atlantic waters. The first sighting of lionfish was in 1985 near Dania Beach in Broward County. By 2000, the species were regularly spotted off the Atlantic coast. Today, they are common in the Bahamas and Caribbean and have been noted in the northern Gulf of Mexico.

Lionfish are native to reefs and rocky crevices of the South Pacific, Indian Ocean and the Red Sea, according to Florida Fish and Wildlife experts. Some say they may have been introduced here in an aquarium release. Nonetheless, controlling their growth is tantamount to

the future of Florida’s native fish. Lionfish have no known predators in Florida waters, leaving man to be the predator. They can grow to an average of 15 inches and should be caught with care as they possess 18 venomous spines. The striped fish are legal to eat and are served in a number of Florida restaurants. Cooking neutralizes the venom and many consider them a tasty dish.

In other business, the committee will take a look at the language in the code for replacing new docks and lifts. While there is one instance now involving Dale Roble of 1133 Whiteheart Court, committee members acknowledge that the problem of new construction impacting a neighbor’s dock access will surely be repeated. Roble explained that his existing dock and his neighbor’s new dock meet city setback rules, but that the space between the two limits his ability to “dock without help.” The committee acknowledged that there is room for clarification in the wording, and that the code may not include the consequences of infringement on a neighbor’s property when a new structure is installed.

The condition of many channel markers within the city’s water jurisdiction is also on the docket for discussion March 19. Marco City Councilman Kenneth Honecker declared them “awful” at its February meeting and also suggested posting street signs at the ends of the canals. Tim Pinter, the city’s liaison to the Waterways committee, noted that an annual inventory of signs and markers used to be conducted by the waterways group, noting that it had not been done in four years. Committee members agreed that addressing the “marker issue” was pretty straightforward and was extremely valuable to boaters.

Welcomed to the Waterways Committee were new members Walter Jaskrewicz and Steve Fleischer. Jim Timmerman was unanimously re-elected chairman and Ben Farnsworth was elected as vice chairman. The committee meets on the third Thursday of the month. Next meeting is March 19 at 9 am.