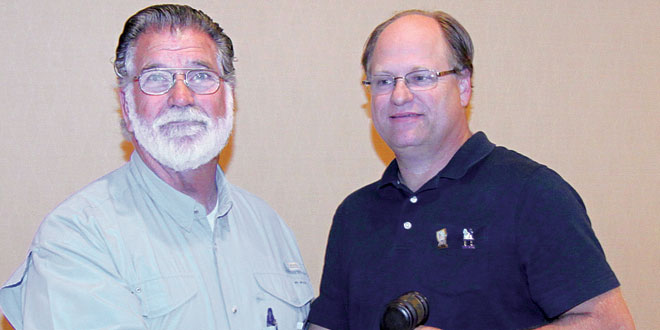 For a relatively small city, Marco Island boasts a sophisticated water system. We’re a barrier island surrounded by saltwater and environmentally sensitive habitat. Consequently, getting water to paradise was never as simple as piping it in from Naples. Today, the city water utility encompasses an aquifer storage system, a reverse osmosis system, three drinking water facilities, two wastewater facilities and collection and distribution systems for both drinking and wastewater. Jeff Poteet is the general manager who oversees it all. On January 5, Poteet was elected president of the Florida Water & Pollution Control Association, a position that singles him out as an industry leader.

The unassuming father of four, including twins, enjoys working on his farm in his spare time and holds a BA in math as well as an MBA. He grew his career from a wastewater operator trainee, and has earned several industry awards along the way. Poteet sees his position as FWPCOA President as an outgrowth of the opportunities that working on Marco provided and believes the experience will help him in turn better serve the utility. “Throughout the years the city has supported the utility by improving infrastructure and providing the tools necessary for staff to do their jobs safely and efficiently. Because of this support, our Water and Sewer Department has been recognized for their outstanding performance in treatment, operations and safety. I would have never been put into a position of leadership of this great organization without the city’s support or the outstanding efforts performed day in and day out by the Marco Island water and sewer team.”

The FWPCOA’s mission is to protect the health of citizens and preserve natural resources. It provides key networking and training for its members. Poteet, who has been a member for over a decade, adds, “[Treatment center jobs] are highly regulated with many state and federal requirements that can be challenging to understand. Whether it’s through working together on a committee, attending meetings, workshops and conferences or volunteering at the local regional level, connections are made that can lead to increased knowledge of the profession.”

Poteet hopes that he can encourage other members of his team to use the association to learn and grow as well and looks forward to the experience that leading the FWPCOA will bring to running the Marco utility. “Anytime someone assumes a role of leadership that person gains knowledge from that experience. I expect that this experience will help me to become a better leader which will directly benefit the utility. I also hope that my new role will entice other team members to become involved in the association. As more team members become involved with the association the better we will be able to serve this great community.”