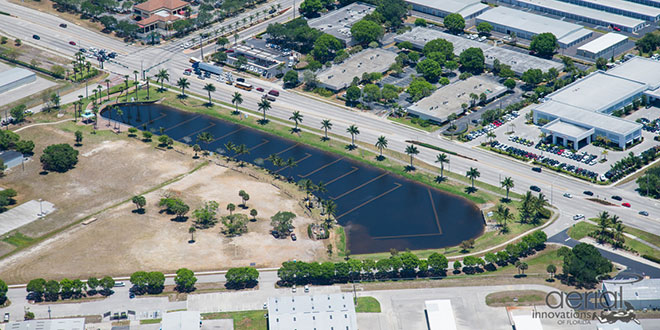 The large pond along Airport Pulling Road at Naples Municipal Airport may take on unusual colors during the next month, but there is no cause for concern. University of Florida researchers are adding dye to the waters to test computer models that predict water flow.

Testing will continue for three to four weeks and will occur during or immediately following rain. The dye, the safest used for water tracking, typically creates a reddish tint and may take more than 100 hours to dissipate.

Underwater gabions – walls created with baskets of rocks – were installed in the pond earlier this year as part of an $8 million water-management system improvement project. The underwater structures were added to the retention pond to slow water flow and increase the effectiveness of the filtration process. Scientists are dyeing the water of the pond, which is southwest of the Airport Pulling Road and Radio Road intersection, to check the effectiveness of the gabions.

The project altered the shorelines of this pond and others to discourage wildlife, a move that enhances safety for aircraft operations and surrounding communities by reducing the potential for bird strikes.

The project includes automated water-monitoring systems, and grant funding includes monitoring the results of the improvements for two years. The project is being 95 percent funded by the Federal Aviation Administration and the Florida Department of Transportation. If monitoring results confirm expectations, the project could set a national standard for how airports handle water-management issues.

Testing water from the airport’s airfield has shown that it is cleaner than residential runoff, but the airport accepts and cleanses runoff from 400 acres of industrial development east of the airport. Clean water leaving the airport site flows into Rock Creek and the Gordon River.

All funds used for the airport’s operation, maintenance and improvements are generated from activities at the airport or from federal and state grants; the airport receives no property tax dollars. The Florida Department of Transportation values the airport’s economic impact to the community at more than $273 million annually.