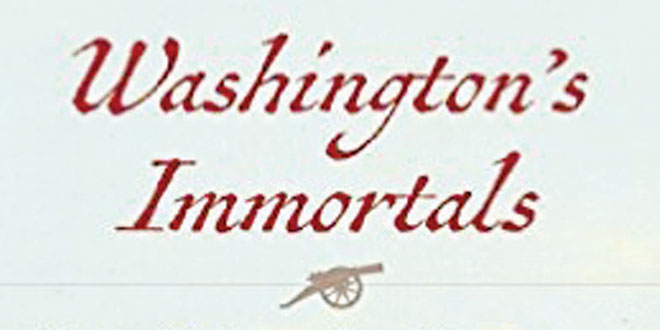 “These are the times that try men’s souls. The summer soldier and the sunshine patriot will, in this crisis, shrink from the service of their country; but he that stands by it now, deserves the love and thanks of man and woman.” – Thomas Paine, “The Crisis,” December 23, 1776.

Don’t let the genre dissuade you from this title. Yes, we know the outcome, but that does not take away from the fact that the author has written this account of America’s beginning in a gripping style similar to that of the most popular thrillers.

O’Donnell follows the first independent military company formed in Maryland in 1774 through the American Revolutionary War. He refers to it as a “Band of Brothers” perspective, following the actions of the members of a Maryland regiment who became known as The Maryland 400. On a background of the Boston Tea Party, followed by the burning of the “Peggy Stewart,” a ship stocked with British tea, and passage of the Intolerable Acts, Britain had shut down the port of Boston. Thousands of men were put out of work. In order to prevent the same occurrence in Baltimore, 32-year-old Mordecai Gist decided to take action.

On December 3, 1774, at a tavern in the gritty Maryland boom town, Gist formed the Baltimore Independent Cadets with a cadre of the social elite, businessmen and prominent members of the city. Their purpose was to protect their rights, as well as to hopefully break away from Britain. They outfitted themselves, trained themselves and recruited more members. O’Donnell argues that it was no accident that Maryland was the place where an independent military force was conceived. Maryland was chartered in 1632 with George Calvert, a Catholic, being appointed “proprietary,” and given authority to set up Maryland’s government as he saw fit. There was no royal governor in the colony until 1691. By then, the independent streak of Marylanders was well established.

The Cadets signed their own death warrants that December night in the tavern. Around the same time, Britain had quelled an insurrection in Ireland and the judge intoned to those rebels: “You are to be drawn on hurdles to the place of execution, where you are to be hanged by the neck, but not until you are dead, for while you are still living your bodies are to be taken down, your bowels torn out and burned before your faces, your heads then cut off, and your bodies divided each into four quarters.”

British officials tolerated neither insolence nor rebellion. When they decided in July 1776 to bring the American colonists back into line, they sent half the royal navy, commanded by Admiral Richard Howe, and a significant percentage of the British military, commanded by General William Howe, the admiral’s brother. Both brothers were members of Parliament, both had been appointed peace commissioners with the power to grant pardons, in the hope that the colonists would back down once they got a taste of British might. William had voted against the Coercive Acts, called Intolerable Acts by the colonists, and his intent was to bring peace to the colonies. His brother did not feel that way nor did General Sir Henry Clinton.

Clinton had lived in the colonies for 10 years, when his father was appointed governor of New York. He was twelve when they arrived and old enough to have served in the French and Indian War when that broke out. So he had previous experience living and fighting side by side with some of the prominent figures on the American side in the 1776 clash. He detested the colonists even more than Richard Howe and Clinton was convinced they should be annihilated. This position led to many clashes with General Howe.

The British forces consisted of generals with an average career of 30 years, privates averaged nine years of service, while the Americans topped out at two years of experience. There were many specialized units on the British side – Scottish Highlanders who usually fought in units made up of their clan members, Light Dragoons, Grenadiers, Hessians, etc. British officers all purchased their commissions, which were very expensive, but they also made money from their positions. They were allowed to keep the salaries of their men who were killed in battle and during the American rebellion, some of the younger officers made almost enough to equal a senior officer’s pay from their dead men. I should note here that not all officers kept their dead men’s pay. The American forces were their polar opposites, basically.

What sets O’Donnell’s book apart from David McCullough’s excellent “1776,” and other works about the American Revolution is the extensive research. He spent years culling primary and secondary sources that had not been used by anyone else. These include diaries, pension applications and letters written by and to those engaged in both sides of the conflict. Also, the fact that he focuses on the members of this one unit that came to be known as the Immortals or The Maryland 400. 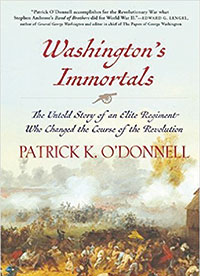 By the time they see action at Brooklyn, I felt I knew these men and following them through nine years of conflict seemed the only thing to do.

When I chose to read this book, I thought it was just the story of this Maryland regiment and their sacrifice at the Battle of Brooklyn, aka Battle of Long Island. Similar to the Greek force at Thermopylae, where all 300 Spartans died as did most of their allies, most of the Maryland’s 400 members perished that day, at least 250, some were taken prisoner, a few escaped. They were dubbed “Immortals” due to their raw courage and persistence. It became obvious that the Americans were not going to win that battle, indeed the entire rebellion could have been crushed that day if General Howe had made some different decisions. In order to give the rest of the American forces a chance to escape and live to fight another day, the Marylanders charged the British forces with their bayonets not once, not twice, but a total of six times. They literally bought an hour of escape time with their own lives. We don’t even know where they are buried.

There is so much information in this book, it is stunning. O’Donnell does delve deeply into the tactics and strategy of the battles and skirmishes, which is not especially interesting to me (frankly, by 1780 I was skimming the battle descriptions), but I found this balanced out by his vivid descriptions of the society, the people other than the military who played a part in the conflict. This was accomplished with frequent quotations from diaries, letters and newspaper articles he used. Some of the officers’ wives and other society ladies played hostess for the officers, having coffees and dinner parties, to keep up the men’s spirits and one would imagine to keep them in touch with civility. When some of the officers were taken prisoners by the British, their wives went with them, where they rented homes and lived out their captivity much as other married couples of their social class.

Prior to reading this book, I did not appreciate how integrated the American forces were – racially, religiously, occupationally, and socially. Thousands of black freemen and slaves fought in this war, on both the Loyalist and Patriot sides. O’Donnell also includes the Loyalists in his account. Sometimes we forget that this was a two-layer war, a civil war as well as a revolution against the crown. The camp followers, women and children, who sometimes hampered the American officers’ discipline of their men was an eye opener. I have never seen them in the portraits of Valley Forge!

The aftermath of the war, what happened to these men once they had defeated the British and America could begin the business of seriously establishing itself, is addressed by the author. Since thousands of Loyalists relocated to Britain, Nova Scotia, or other areas, some of their homes and farms were given to the American officers. They suffered PTSD, although it wasn’t named such, with accounts from family members describing the nightmares and other nervous conditions of the veterans. Instead of IEDs, they faced cannon and grapeshot which were just as destructive physically and mentally.

Many suffered debilitating physical ailments during the war from which they never recovered. Some were from wounds, but many more were from starvation, diseases or infections. In one poignant passage, O’Donnell quotes from a letter written by Charles Willson Peale of the Pennsylvania militia about the early December 1776 crossing of the Delaware River over to Trenton: “A man staggered out of line and came toward me. He had lost all his clothes. He was in an old, dirty blanket jacket. His beard long and his face full of sores…had so disfigured him that he was not known to me at first sight. Only when he spoke did I recognize my brother James.” James was a member of the Maryland 400.

The full title of this book is “Washington’s Immortals: The Untold Story of An Elite Regiment Who Changed the Course of the Revolution.” It is available at all the major vendors and our public library. I think you will be inspired if you choose to read it. I know this Fourth of July will be more special to me. I hope yours is a happy and safe holiday.

I am taking some time off and for the next two issues there will be guest reviewers. My predecessors, Joanne Tailele, founder of Book Remarks, and Diane Bostick have each generously agreed to share their thoughts on a new title. I will be back in August.