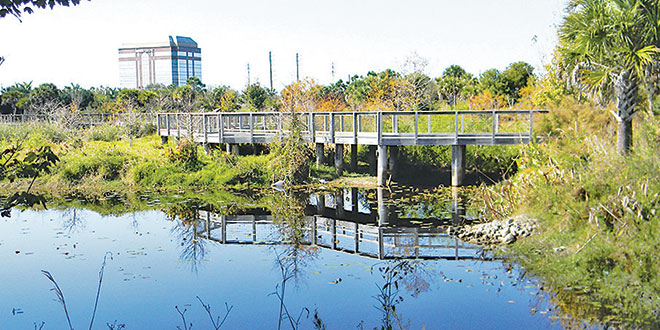 Freedom Park Preserve is impressive as a park located within an urban area that maintains a connection with and respect for the wildness of a local habitat.

The Freedom Park Preserve is located at 1515 Golden Gate Parkway near the intersection of Goodlette Road. It is also called Fred W. Coyle Park. Walking here you get diversity: a memorial, an urban park, and a fairly pristine cypress swamp all within shouting distance of Coastland Mall.

First, there is the Freedom Memorial, a wall in the form of a waving American flag. It is only partly finished, so the community has the opportunity to help fund the completion.

There are two trails. The one to the left (west) is a well-kept urban park around some small lakes, paved walk, bridges, and viewing areas. Around the lake you can fish (catch and release), observe wild life, read the plant identification plaques and interpretive signs. This trail is approved for bicycles and is ADA accessible. It is about one mile in length.

The trail to the right (east) is remarkable for a near downtown area. It is a boardwalk through an old cypress forest that seems nearly untouched. Signage along this area tells the history of the land and how Naples received ownership. It is an interesting story of the preservation of these few acres. The board walk is about seven tenths of a mile and is ADA accessible. No bicycles.

There is a ranger station that is also a visitor/education center, with restrooms, a picnic area and butterfly garden. Just remember that there are no trash cans, what you carry in you carry out.

Walkers have seen various wading and woodland birds, raccoons, turtles, squirrels and other wildlife, and are invited to record their sightings on an erasable board.