Voyage of the Moonbeam: Part II 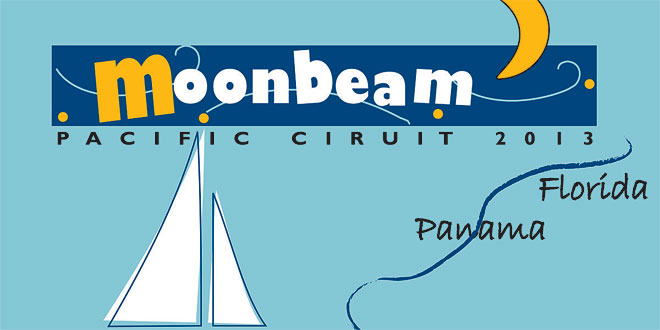 Starting out on a voyage is always exciting as many thoughts run through your mind as what to expect in the days and nights ahead. Obviously, the captain and crew have their own thoughts and images as to what to expect. There are many superstitions pertaining to the sea that sailors all around the world believe to be true. One is the sight of the “Green Flash” in the evening sky. Many believe that it does not exist. Others know that it exists and have seen it many times. I can personally attest to its existence. A green flash occurs as the sun is setting in a clear evening sky. Just before sunset the atmospheric refraction yields a colorful sun set. As the sun bends it gives off a green flash in the sky. The sky must be clear of clouds and lights from land. Some of Moonbeam’s crew did not believe it until they saw it themselves.

Moonbeam left Marco Island on January 13th, 2013 headed for Panama. Aboard is Ken Barden, owner and skipper of s/v Moonbeam, along with the crew consisting of Nancy DeVries, Lee Henderson, Mike Cain and Alan Picard. On January 19th, the crew arrived in Guatemala. This passage was relatively uneventful. They enjoyed 84 hours of pure sailing with only one evening of heavy weather. It all made for a quick passage of 760 miles to Guatemala. Upon arrival the crew celebrated their arrival with this poem.

“In Guatemala we arrived.
Customs and immigration we did survive.
Our Friend Mario did meet us and was our guide.
Up the Rio Dulce Moonbeam did arrive.
At Mario’s Marina we did cheer.
As we all celebrated GALLO beer!”

And the Moonbeam sailed on. On February 10th, Moonbeam and crew arrived in Panama. Also, while entering the locks of the canal, Moonbeam had her fifteen minutes of fame. The boat was filmed by a webcam going through Canal. This has to be significant for any sailor who has ever dreamed of sailing around the world.

Moonbeam is currently resting comfortably in Panama, close to the Pacific entrance to the canal waiting for her captain and crew to return to continue this journey. However, the boat is not lonely as she has a crew of three ladies watching over her. Ken and the new crew for the next leg of the voyage will all assemble in Panama to get ready for the major crossing to the Marquesas. The story will continue around March 11th when Moonbeam and crew takes off once again for the next leg of the voyage.