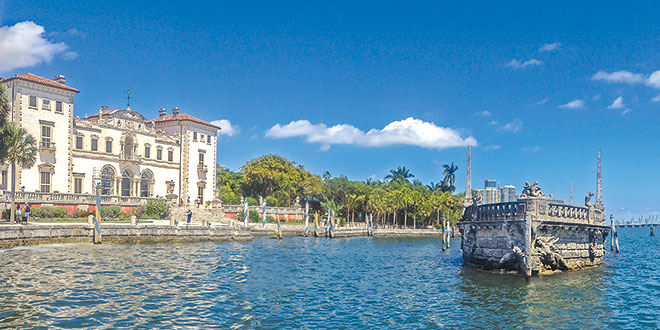 View of the Barge and Vizcaya main house from the Teahouse.

Vizcaya, the former villa and estate of John Deering in the Coconut Grove section of Miami, had been on my list of places to visit in Florida for more than 10 years. I kept putting it off, and then Hurricane Wilma struck, bringing $3 million damage to the gardens, art work and some of the interior. By 2010, the destroyed cafe and shop had reopened, and the gardens and artwork were coming back to life. This past season, I thought the time had finally arrived for my visit.

John Deering was the son of the man who founded the Deering Harvestor Company, which in 1902 was purchased by J.P. Morgan and merged with some other agricultural equipment firms to become the International Harvester Company (IHC). Deering served as vice president of IHC for a period of time until poor health in 1909 led to his retirement from the daily operations. In 1910, he purchased 180 acres along the Biscayne Bay, and from 1914 to 1916, Vizcaya was built.

Deering worked with designers to create an estate modeled after the European villa tradition but incorporating the unique south Florida environment. There were formal and informal gardens, native forest (hammock), and a small “village” of a farm and outbuildings to provide services to Vizcaya. The decorative interior was filled with treasures from the 14th to 19th centuries purchased by Deering in Europe. He had a channel dredged in Biscayne Bay so that ships could deliver these wondrous pieces directly to the

The South terrace of the Main House. PHOTOS BY VICKIE KELBER

villa. In addition to his attention to the artistic details, Deering made certain cutting edge technology was incorporated into his home with items such as central vacuum, refrigeration, central heating, telephone switchboard, elevators, and communication and fire alarm systems.

When Deering, who had never married, died in 1925, the estate was inherited by his two nieces. Storms and time began taking their tolls on Vizcaya and the nieces sold off or donated a sizable portion of the land. In 1952, 50 acres, including the villa, some of the gardens and village were sold to Miami-Dade County for $1million; the nieces donated the furnishings to the county. Vizcaya opened shortly after as the Dade County Art Museum. In 1994, it was put on the National Historic Landmark register, and in 2008, the National Trust for Historic Preservation named it as one of America’s Eleven Most Endangered Historic Places — not due to its vulnerability to hurricanes but because of encroaching high-rise development. It is now operated as the Vizcaya Museum and Gardens.

The access to Vizcaya traverses a narrow road through the remaining forest to a parking lot, and then people must proceed on foot along the landscaped, fountain bedecked pathway. Entering into the large, center courtyard with its dolphin fountain, it is immediately evident that Deering achieved his goal of Old World Mediterranean elegance combined with Florida’s environment. Once open to the air to catch the breezes, it is now covered by a protective glass dome. Glass doors to one side reveal a panoramic view

of Biscayne Bay, while the view through the stained glass to another side is of one of the formal gardens. The floor is made of limestone from a local quarry.

The style of the richly embellished interior is eclectic. One passes from a Rococco room to one that is Baroque, then Renaissance, Neoclassic, and then one with an Asian influence. There are ceilings from Italy, wallpaper from Paris, a Norman fireplace, a 16th century tapestry from Belgium along with hidden passageways, electrified candelabras, a pipe organ that is played daily at 4 PM . There is a carpet that belonged to the grandfather of King Ferdinand, tapestries once owned by Robert Browning, a 2000-year-old Roman artifact, a relic from Pompeii.

The second floor contains Deering’s private suite with view of the Bay, the main guest suite as well as secondary guest bedrooms and baths, a breakfast room overlooking the gardens, and the main kitchen. The kitchen was placed upstairs so that cooking smells would not invade the courtyard. Food was transported down to the first floor serving pantry via an electric dumbwaiter. Two towers above the second floor house additional bedrooms.

Although Deering built the first floor at an elevation of 12 feet due to concern about storm surge, the bowling alley and billiard and smoking rooms were built below. In modern times, they have been turned into the museum’s cafe and shop. Their lower elevation has resulted in their destruction in both hurricanes Andrew and Wilma.

One can spend a great deal of time 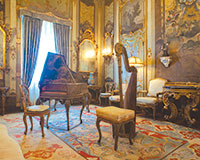 The Rococo Music Room features walls and ceiling from Lombardy, Italy and a harpsichord from Cortona, Italy, signed and dated 1619.

wandering about the exterior of Vizcaya, and I did just that. The East Terrace has steps that lead down to a walk along Biscayne Bay. To the left, a Venetian bridge, to the right, a filagreed teahouse. In the center, “The Barge”. Designed initially as a breakwater, it is a work of art itself; an ornate sitting or party area with sculptures by A. Stirling Calder, father of Alexander Calder.

The gardens continue a blend of Italian tradition with south Florida environment. Statuary, fountains, pools, grottos, gazebos, bridges, a Casino are all surrounded with lush, manicured subtropical vegetation. There are formal gardens, pocket gardens, an orchidarium.

A location as unique and beautiful as Vizcaya is very popular as a setting for films and photo shoots. The exterior is also a high demand location for weddings and photos commemorating a quinceañera, the celebration of the 15th birthday for many Latin American girls. While there, I noticed one professional model on a shoot and three quinceañeras. The Museum has both a professional photo and personal portrait fee structure.

Vizcaya is noted to be wheelchair accessible, and there is a map of ramps and lifts. There are a lot of stairs and uneven floors and grounds. For those unable to travel to Vizcaya, the website vizcaya.org offers a virtual tour.

Incidentally, James Deering’s brother, Charles, owned a nearby estate in Palmetto Bay. The Deering Estate at Cutler is also open to the public for touring and other activities including canoe trips. I’ve not visited, but for further information, consult the website deeringestate.com.