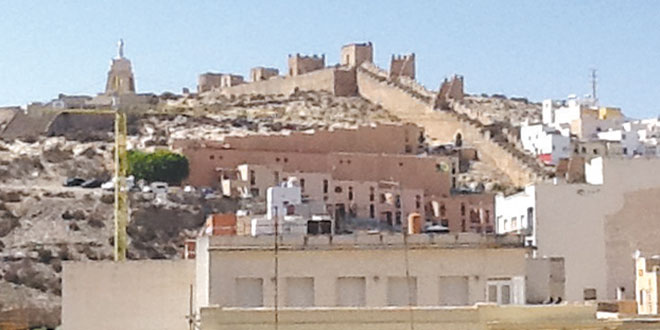 By the time this story is published, I will be back home on Marco, as I’m writing about my experiences here and now. I’m in a sad-to-leave-but-happy-to-go emotional state of mind. What may seem to many of you like aimless wandering about the southern Iberian coastline actually panned out to a memorable and wonderful experience.

The cities of the Costa de Sol dot the coast line like a beautiful set of pearls. We are currently in Almeria, Spain, which is considered the last but not least wonderful northern-most city on the Costa de Sol. This whole city knows how to party during their summer festivals as I mentioned in my previous “Glitter.”

So far we have visited Malaga, Torremolinos, Marbella, Gibraltar, Cadiz, Grenada and Seville to name a few. At first sight, they do seem similar, but each one has its own history, personality and specialities, such as the wines, cheeses, olive oils, fish, beef and pork that influence each locale’s cuisine. Just about every large city I explored has a mercado — an outdoor-indoor marketplace — that features all the exotic (to me anyway!) local seafoods, meats, cheeses and produce. The choices are endless and fun, and almost every vender offers you a bite of this or a nibble of that. This beats any food shopping experience I have ever had at home. The smell of salted cod and fresh fish reminded me of my childhood at the outdoor market on weekends in Haymarket Square in Boston.

The delicious result of these mercados is evident when dining in the surrounding restaurants; the word frozen food is nonexistent. Another tip…One should always avoid the obvious tourist trap restaurants and ask locals, such as a well-tipped bodega employee, where she or he likes to eat? Of course, it helps that your traveling companion speaks fluid Spanish. This simple method of gastronomic discovery is rarely a disappointing experience and is also easy on the wallet.

Alas, it is time once again to move on, back to our trusty and now dusty Renault. Whatever it is? I grabbed the now well-worn map of southern Spain and asked my co-pilot, “Where next?” A simple finger point, and, “Hmm…this looks good; I’ve heard of that town,” and we’re off!

Two and half hours northwest from the coast is the ancient city of Granada, the home to one of the most magnificent arabic palaces built on the European continent many centuries ago — The Alhambra. I read a little about this mystical place in high school, but I was not prepared for what I was about to behold.

Perched on a high peak overlooking the city of Granada is the most lush and grand Moorish palace I have ever imagined. The sound of bubbling fountains and water rushing by in miniature aqueducts surrounds you as you meander through centuries of manicured hedges, gardens and terraces. Even with hundreds of tourists milling about, there is a feeling of peace and tranquility. The architectural details of arches, walls and ceilings are mesmerizing. It was obviously good to be king or Sultan!

The Moors controlled this palace fortress for many centuries until they were finally expelled by the royal Spanish families in 1492, and there were many changes. Islamic influences became Roman Catholic. The Spanish even added another palace. Parts of the palace suffered earthquakes and desecration and later fell into near ruin until the French conquest in later centuries. The French soldiers appreciating its beauty actually restored parts of the jewel of Granada to its original glory, only to blow up part of the palace when forced to evacuate. It is a miracle so much of the palace has survived to this day.

While poking around the city below Alhambra, we noticed a sign pointing to the whereabouts of the ancient public baths. We expected a dry, dusty relic of what once was, but to my amazement, we found a fully functioning palace of natural hot water open to the public like the bath houses of centuries old. For 14 Euros, you got a towel (no suit) and a locker. I gracefully refused noticing it was co-ed, and bathing suits, I’m sure, we’re optional. Is my proper Bostonian parochial upbringing at work here?

Granada is a mix of the old and new. The sophisticated shopper will not be disappointed with the endless array of elegant shops and boutiques (Thank goodness my 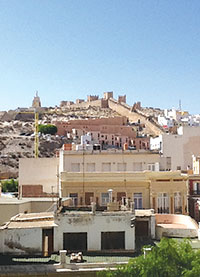 wife is not here!) that line the main and secluded alleys. Speaking of secluded, sometimes an object in plain view is the best hiding place, and squeezed between a modern shoe store and dress boutique we found Bodega Enrique. This hidden gem opened more than 140 years ago, and the 300-square-foot bodega (bar) hasn’t a single chair and serves patrons from a narrow armrest of a bar. It is a treasure discovered.

Order a small beer or glass of wine, and moments later a complimentary plate of tapas appear. Order another beverage, and there appears a different tapas. I’m liking this! The tapas can be on slices of bread and can be thin sliced cured Iberian ham, large fresh olives, garlic fish dip with potato or aged sausage. My favorite was the chorizo.

I can’t even tell you what half of the tapas were made from except that they all tasted amazing. What makes this place so special is the unavoidable camaraderie that occurs in a place so small. In moments, the place was packed. We talked to Aussies on holiday, Brits and a French couple, and when the crowd cleared, the bodega-tender, Pedro, was extremely helpful on where to go and what to see.

By and far, Enrique’s was the highlight of the trip, tiny and quaint with only one quality beer on tap and an endless array of wine choices. We signaled Pedro for the check. He came over and wrote the charges upside down on the bar in white chalk. We laughed, paid the bill and he then wiped off the total with a damp cloth. The IRS would love this method of bookkeeping back home! Who has room for supper? Enrique’s is a place not to be missed when visiting Grenada.

On a jewelry note — after all this column is supposed to be about that subject — I can’t help but notice that here on the Costa de Sol there is no lack of high-end jewelry stores, and every shop I saw was deserted. Bars, bodegas, cafés, dance clubs that’s a different story. The young and beautiful people, locals and tourists alike, wear silver and stainless steel but sparingly. The young Spanish men and ladies dress very chic especially at night. It seemed like I was the only one wearing a t- shirt. Want to leave no doubt you’re an American over here? Wear a t-shirt and a ball cap!

Well, my aimless wandering will soon be organized. We are heading back to Malaga so my traveling companion can catch his flight back to Marco. It just so happens my wife is scheduled to arrive at the same airport (coincidence?) an hour later, and we will catch a short flight to Mallorca, where Andrea will force me to follow a regimented program of strict rest and relaxation to relieve my stress. I feel fine dear; I really do.

They say there is no such place as “Margaritaville.” It’s where you make it, and I discovered the next best thing — “Sangriaville” — parking my butt on a sun-drenched, cliff-side hotel in Cala Fornells, Mallorca.

I enjoyed my seemingly chaotic rambling about the southern coast of Spain. In truth, absorbing the life styles of ancient and current cultures and the way these people live, design, create and build everything from A-Z is so different from the way we live in the States. It’s a fact they live healthier and longer than we do because many Europeans work to live and not the other way around. They eat better foods, and stay in shape. Where we would jump into a car to go a few blocks, they walk or bike, and this includes folks in their late 80s.

I have mentioned before the siesta thing would not be a bad idea on Marco Island especially in the slow steamy summer months. What island shopkeeper would mind opening at 8 AM work till12 PM close and re-open from 5-9 PM? At first, customers wouldn’t like it, and neither would my staff. Eventually, though, they would learn to love it. I sure as heck would live longer!

Oh! I almost forgot to mention the new line of jewelry that will be the hottest thing since Pandora. It’s called “Infinity,” and it will be available in late October exclusively at The Harbor Goldsmith. The Infinity line launched a success in Europe and will soon be rage in the U.S.