Villa at Terracina Grand Tops Out 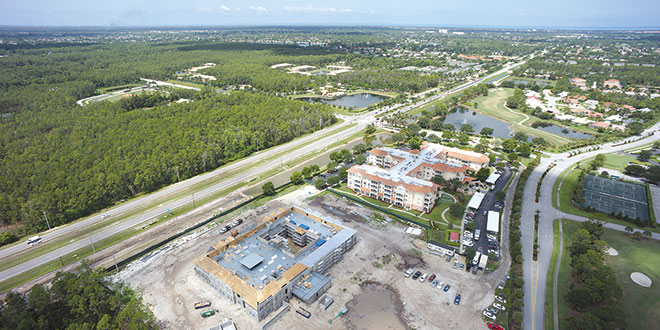 The Goodman Group, the development and management company for the new community and Terracina Grand, hosted a topping out ceremony on Thursday, June 19. The event featured a “hard 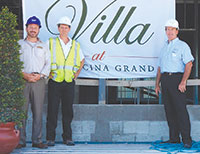 hat” barbecue lunch to thank the construction crew and commemorate the completion of the building’s exterior.

According to Peter Hendrickson, executive director of Terracina Grand: “Celebrating the efforts of the construction crew used to be commonplace in the industry. Sadly, that no longer seems to be the case. However, there would be no ‘Villa at Terracina Grand’ if it weren’t for the talents of these highly-skilled craftsmen and women.”

Hendrickson continued, “As we are

in the business of ‘caring,’ we felt an obligation to honor these dedicated construction professionals. With development on the rise again in East Naples, I certainly hope others will follow our lead.”

Beyond the BBQ lunch and the tradition of placing a tree atop the building’s roof, representatives of the crew also helped plant a special tree in Terracina Grand’s existing memory care garden.

Villa at Terracina Grand will accommodate up to 60 residents 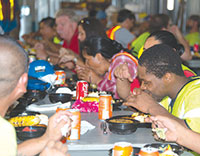 needing memory care. The new memory care community is situated next to Terracina Grand, near the corner of Davis Boulevard and County Barn Road. The community will feature well-appointed studio apartments, friendship suites, and one-bedroom apartments. It is expected to open in early 2015.

Families interested in obtaining more information about the new Villa at Terracina Grand memory care community, or the Pearls of Life memory care program, are encouraged to call 239-455-1459 or visit www.villaatterracinagrand.com or www.facebook.com/terracinagrand.