Viewing at the Zenith 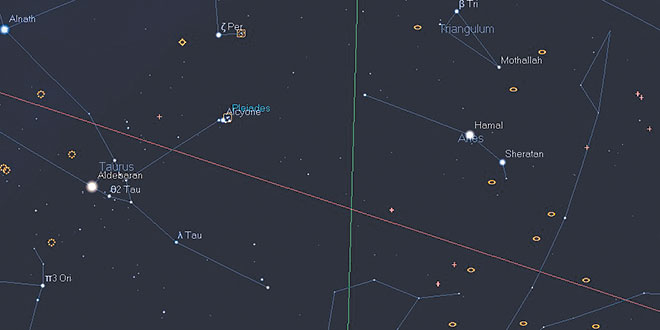 Straight Up – South is at the bottom 9:00PM December 26th. SUBMITTED PHOTO

Tonight we will look straight up to find the zenith. The zenith is the point in the sky that is directly over your head (nadir would be the point directly under your feet). No one else on Earth shares your zenith exactly, it is yours alone. Draw an imaginary line from Polaris, through the zenith and down to the south celestial pole; this line is called the meridian. On the chart tonight the meridian is the vertical line. When a star crosses the meridian it is said to culminate; it has reached it’s highest point of the evening and starts to descend. Notice that unlike a zenith, a meridian can be shared, someone standing directly north or south of you will share your meridian; people to the east or west would not. Prior to the 20th century that had implications in timekeeping. When the sun crosses the meridian it’s said to be noon, so everyone along your meridian would set their clocks to 12. Most towns in the world had their own meridian and kept their own time; this got confusing fast when railroads were invented (which had to keep to a strict schedule) so we switched to time zones instead.

Notice how the stars seem brighter and more numerous at the zenith; this is no illusion, it is true! You are looking through much less air than usual; when an object is at the zenith, it’s the best possible time to look at it, details unnoticed when it’s lower in the sky now become visible. The big problem is your neck is not really built to enable you to stare straight up for long. While there are several creative solutions to this problem, the simplest is to just lay down – poolside reclining chairs are probably the most comfortable.

Look again at the Pleiades, it’s easy to count the stars now. With binoculars, on a really dark night, you might be able to see a bit of fog around the brightest star of the Pleiades. This is part of the nebula the entire cluster is buried in. If you go out about two hours earlier tomorrow night you can catch the Andromeda Galaxy crossing the meridian – it will be larger and brighter to both naked eye and binoculars.

Bright planets begin to return our evening sky late this month! Venus and possibly Mercury may be glimpsed low in the west after sunset at the very end of December; Jupiter should be visible in the east around 10PM after Christmas.

Mr. Usher is President of the Everglades Astronomical Society which meets the second Tuesday each month at 7:00PM in the Norris Center, Cambier Park, Naples.