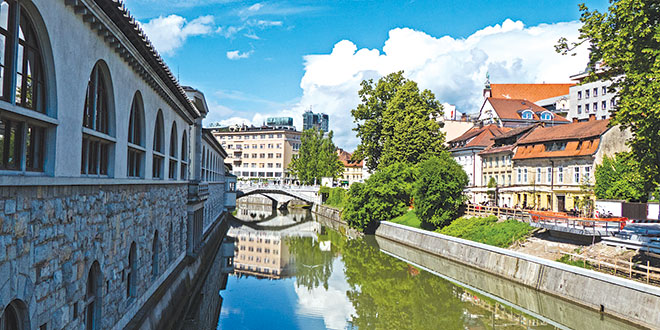 A ride along the river in Ljubljana is a peaceful diversion.

I have two words for people who say the capital cities of Europe are old and stagnant: visit Ljubljana (lyoo-BLYAH-nah). The capital of Slovenia and located approximately in the center of this small country, it is young and vibrant. With a population of about 280,000, the 60,000 students in this city help invigorate it. It is a captivating city in which to spend some time.

Major rebuilding after an earthquake in 1895 has made this city an architectural delight with a mixture of some original and restored Baroque and Vienna Secession (art nouveau), along with a touch of Byzantine and neoclassical. Much of the remodeling was designed by the architect Joze Plecnik, and his name is touted throughout the city.

The focal gathering spot in Ljbljana, Prešernev Square (trg), is somewhat reminiscent of the Dam in Amsterdam the way young people gather and sit on the stepped pedestal of the statue that gives the square its name. When the statue was erected it was somewhat scandalous as a semi nude muse overlooks the seated poet Prešernev, who is a national hero credited with inspiring the rise of nationalistic pride in the 1800s. Visible from the nearby Franciscan Church of the

A stroll along the river is yet another pleasant diversion in Ljubljana. PHOTOS BY VICKIE KELBER

Annunciation, residents used to drape the muse to cover her nakedness. Finally, trees were planted to block the view from the church. Today, the square buzzes with activity including street performers, shoppers on their way to the very upscale galleria on one corner of the square and a stream of bicycles flying through the car free area.

The Ljubljanica River flows through and divides the city, and its bridges are landmarks worth visiting. Just off the square is Pleãnik’s Triple Bridge. When he redesigned the bridge, he wanted to keep the original stone arch but needed to accommodate the increasing traffic, hence the triple multi-balustered span. Now, only pedestrians and the ever-present bicycles can use the bridge.

The wonderfully whimsical Dragon Bridge was built when Slovenia was part of the Austro-Hungarian Empire and was dedicated to the 40-year rule of Franz Joseph I. The dragons that decorate it and also have become a symbol of the city relate to a legend concerning Jason and the Argonauts; they supposedly killed a dragon that watched over the marshes of Ljubljana.

The decidedly modern pedestrian (and bicycles, of course) Butchers’ Bridge is covered with padlocks that lovers have placed there, symbolic of eternal love. This is a 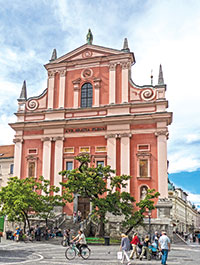 The Franciscan Church of the Annunciation in Prešernev Square.

custom that is becoming increasingly popular in Europe; we’ve seen it on bridges in Prague, Paris, Moscow, Florence, Seville and Zurich. Sculptures of Adam and Eve, Prometheus, and a styr line the bridge.

Another Plecnik stone pedestrian bridge, Cobbler’s, connects two other popular squares in the old town. Perhaps because of the name of the bridge or perhaps just a coincidence, students have begun a tradition of flinging their shoes over the power lines on one side of the bridge at the end of the term. Dozens of pairs dangle making it a popular photo shooting site.

The market, a graceful colonnaded structure reminiscent of a Greek or Roman Temple at the northern end of the old town, provides an arcade for sidewalk artisans and food stalls. Downstairs is a fish market and restaurant; an outdoor produce market is adjacent to it.

Rising above the old town is a castle that has housed both the Hapsburgs and Napolean’s forces, as well as serving as a prison at various times in history. The area around the castle has been inhabited since 1200 BC; the castle dates from the 12th century. There is not a lot to see of the castle itself, but the view of 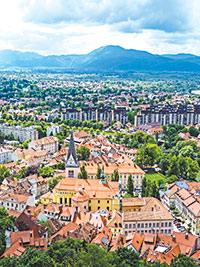 View of Ljubljana from the castle.

the city and surrounding mountains from the castle tower is magnificent, especially at noontime when accompanied by the pealing of bells from the churches below. There is a funicular and a tourist “train” (motorized tram) up to the castle.

There are three major churches in Ljubljana: the Orthodox Church of Sts. Cyril and Methodius; St. Nicholas Cathedral; and the aforementioned Annunciation. The “new” town is on the west bank of the river and includes the university and government buildings and cultural sights, such as museums and the opera….and some lovely boutiques.

Slightly outside the main attractions is Metelkova Mesto. A former barracks, it has become an arts and nightlife center with bars, clubs, galleries. Its look is quite avant-garde, with its graffiti-covered buildings and eclectic sculptures.

A stroll along the river, with elegant willow trees providing shade on the cafe-lined quays, is a relaxing pleasure in Ljubljana. Cruises on the river are available, but don’t expect an experience like the Bateux-Mouches on the Seine in Paris. Tourism is still fairly new in this former Yugoslavian country. The boats are simple and the trip not narrated. But, it is an enjoyable way to see a little more of the city core and also to see

A group of children perform traditional Slovenian dances — one of the many cultural events offered to the public in Ljubljana.

how close the city is to the river resort areas. All along the river, you see young people enjoying the fresh air and relaxation its banks provide.

During lunch in Ljubljana — a four-course event that day — we were reminded of home. Our vivacious, young waiter asked where we were from. We said, “Florida,” and he inquired, “Where?.” When we told him Marco Island, he said, “I know Marco Island. I have been there and to Naples.” Originally from Macedonia, he worked as a waiter for six months in Miami and visited Collier County. We mentioned that when we had dined recently in Naples, our waitress was from Macedonia. He said, “Was it……?” (naming a restaurant on Fifth Avenue in Naples). Yes, he truly did know Marco and Naples.

Ljubljana is definitely a tourist-friendly city. Their tourist information bureau offers free walking tours, as well as a wealth of literature and other assistance. They also provide driver-staffed golf carts that wander throughout the old town, offering free rides to visitors. There is an extensive self service bike rental system, with bikes available approximately every two-tenths of a mile. English seems to be universal, and, as a member of the EU, Slovenia uses the Euro as its currency.