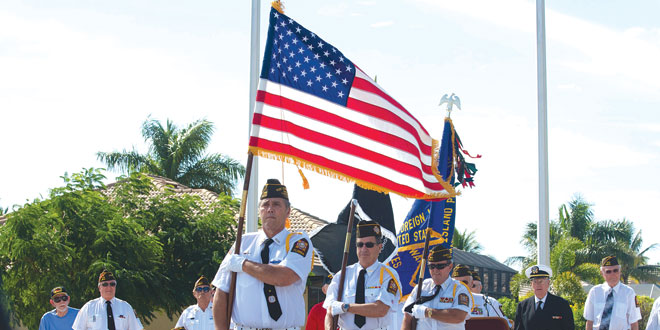 Marco Island’s Veteran’s Day Ceremony was an honorable tribute to the men and women who have served our country in the armed forces. Led by Lee Henderson, VFW Commander, the occasion, held on the 11th hour of the 11th day of the 11th month, was attended by many.

Henderson, in his first year as commander, led the ceremony with enthusiasm, sincerity and a bit of humor. His speech was engaging and informative as he discussed many of the lesser known military holidays, such as the Spirit of 45 and Patriot Day.

A number of special tributes were extended to the veterans in our community and to all around the country. The Marco Island Strummers performed the anthem of each military branch, and those who served stood when their’s began. A fly-over by the Marco Island Civil Air Patrol was another highlight of the event.

A soliloquy created and performed by Mike and Janet Stapleton was the standout of this year’s ceremony. As Janet sang “America the Beautiful” in the background, Mike delivered a speech – a speech combining some of the most famous delivered of our time. It included Martin Luther King’s “I have a dream,” President Lincoln’s famous “four score and seven years ago” line and even the comments made by NASA upon man first landing on the moon. Janet’s voice was beautiful, and Mike’s speech was well delivered, patriotic and passionate.

As the event came to a close, Herb and Emily Savage came forward to led the crowd in “God Bless America.” As always, Herb’s energy and Emily’s voice closed out the ceremony on a perfect high note.