Veterans in the SPOTLIGHT 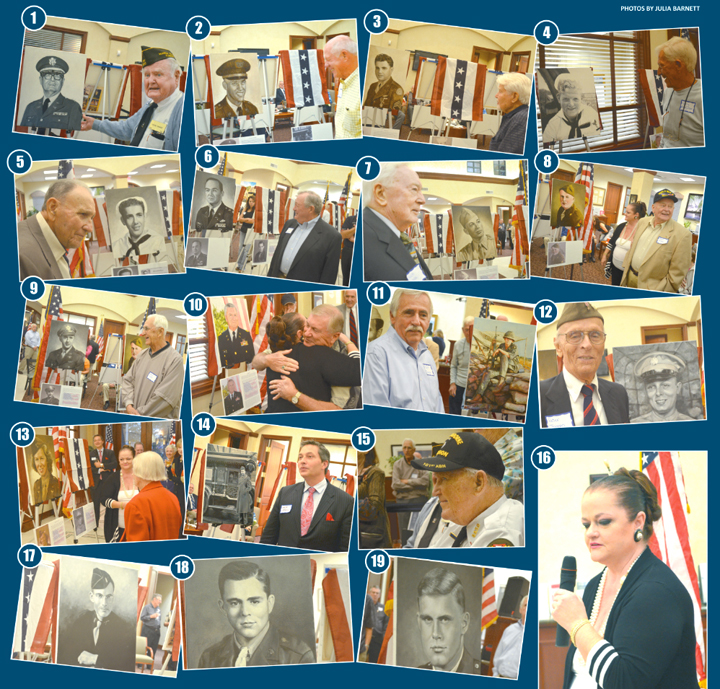 Among the various Veterans’ weekend events, the Saturday, November 10, gathering at Iberia Bank was an intimate and personal commemoration and recognition for the men and women who served our country and kept us free, centering on portraits painted with love and care by local artist Malenda Trick.

The night included a private unveiling for the veterans and their families being featured in the portrait series, followed by a viewing open to the public. The private unveiling began with acknowledgments and thanks, followed by the “Pledge of Allegiance,” led by Bonnie Woodward, daughter of one of the featured veterans, William DC Blair. World War II veteran Peter Thomas stood up and read two separate pieces, one his own and another written by a dear friend; a moving and beautiful prelude to a rendition of “God Bless America,” sung by World War II veteran Herb Savage and his wife, Emily.

Artist Malenda Trick then took her turn at the mike, and told the story of where the inspiration for this project had been born, moving the guests beyond words. She told of a trip to France she had taken in May of 2001, where she had stumbled upon a group in a village square that revealed itself to be some very old men in military attire, circa World War II, and bearing American and French flags. They were celebrating the end of World War II, the liberation of the French from the Nazis and the United States of America in general.

This September, thinking back on that event, Malenda made the decision to honor our community’s veterans in the best way she can—through her art. To choose which veterans would be featured, Malenda went to Keith Dameron at Iberia bank to assist her, as she wanted to focus on veterans in our community and Keith knows the locals well. Thus, the twenty veterans were chosen, and Malenda began her work; all oil on canvas. She finished the first on September 24, 2012, and the last on November 7.

The paintings were done from photographs lent to Malenda, taken during the early days of the featured veteran’s service. The photographs show young men, and one woman, ready to defend our country and our freedoms. Malenda captured their innocent and honest stark belief in liberty, life, and the pursuit of happiness. The portraits are beautiful, true and emotional, giving recognition in an original, meaningful and personal way.

The series of portraits will be available for viewing at Iberia Bank on Marco through November 16, after which it will be on display at the Iberia branch on Pine Ridge Road, from November 19 to the 23. From there, the exhibit will be moved to Hodges Funeral Home at Naples Memorial Gardens for November 26 and 27. The final stop for the portraits will be at the Naples Backyard History Museum from November 29 through January 30, after which the paintings will be gifted to the veterans they so beautifully feature.

16. Artist Malenda Trick shares her inspiration. “These people are beautiful, and I’m very proud to do this. Before I was even born, they went out and fought for my freedom.”

17. Frank Johnson, WWII, Navy, was not present for the unveiling.

19. Wayne Smith, Vietnam, Air Force, could not be at the unveiling.