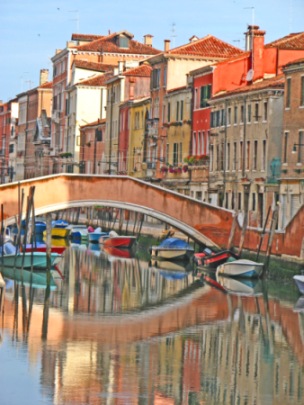 Venice, located in northeast Italy, is truly a unique destination. It is composed of 118 small islands in a lagoon on the Adriatic Sea. Footbridges connect the islands and the Canal Grande serpentines through the middle. The city is divided into six neighborhoods or sestieri and addresses reference a location’s particular sestiere: Cannaregio, Castello, Dorsoduro, San Marco,  San Palo, and Santa Croce.

Arriving in Venice is half the fun of the trip.  Yes, you could take a bus or car taxi from the Marco Polo airport to the bus station at Piazzale Roma and then a vaporetto or water taxi to your destination, but it’s worth splurging on a water taxi directly from the airport to experience the unparalleled view of the city as you race along the lagoon.

As there are no cars in Venice, walking is the best way to explore the city. There are water buses or vaporetti that traverse the Grand Canal and outer waterways and a second type of water craft, a motoscafo provides transportation to the outer islands.  It’s advisable to purchase an ACTV pass for the public transportation options; passes are available for varying lengths of time from 12 hours to 1 week.  You must validate your ticket before boarding the boat.  Gone are the old yellow machines that used to stamp your ticket: now you must swipe it  in front of a screen on the very modern machine located on the dock.

There is so much to see in Venice, that it’s difficult to identify just a few top sites, but here are twelve of the recommended highlights.