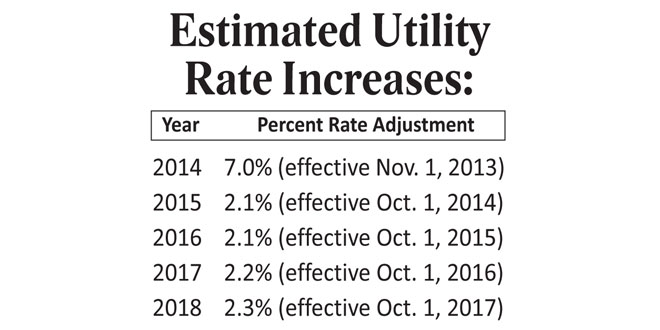 It is almost official.

The Marco Island City Council voted at Monday’s meeting to approve a resolution for utility rates increases for the next five years. Pending a final vote on the increases themselves by the city council, the first increase would be for seven percent and would be effective as of November 1, 2013. Subsequent annual increases range between 2.1 and 2.3 percent, and would become effective on October 1 for the next four years beginning in 2014.

This move came after two years with no rate hikes and was done in conjunction with the refinancing of the outstanding series 2003 and series 2008 utility system revenue bonds. The refinancing of these bonds will be accomplished with the issuance of Series 2013, $60.75 million Utility System Draft Refunding Revenue Bonds, which have a lower interest than the current bonds and amount to an interest savings of about $200,000 annually over the 20-year life of the 2013 bond series.

That is a $4 million savings on interest alone.

According to Robert Ori, president of Public Resource Management Group Inc. — the city’s utility consultants — these rates hikes will improve the city’s financial position and allow it to meet certain bond issuance and insurance requirements to maintain an “A” rating. At the August 5 City Council Meeting, Ori told councilors and city staff an “A” rating would save the city $5.3 million over the 20-year life of the new bonds.

Moreover, he told the city council, they would have to increase utility rates some time soon anyway in order to offset certain negative economic pressures impacting the financial status of the utility. “First, you haven’t had a rate increase in two years,” he explained to city council. “You’ve had a 9 percent reduction in water use and just marginal growth in customers at less than one percent. There has been a reduction in the surcharges you are taking in with no change in overall debt service. There have also been inflationary impacts on the costs of your operations, and you have had to increase your pay.”

These factors combined with the bond refinancing all point to rate hikes, he noted, and not refinancing the two past bond deals “would require a larger rate increase than what is now being recommended.” Why? Because the city would not be receiving any of the financial perks from the currently proposed refinancing deal.

“In 2013, we were supposed to increase rates, but we didn’t because we had a few years of surplus revenue. Now is the time to pay back the piper to get us back into compliance,” said Councilor Amadeo Petricca.

It is important to note that the approval of the resolution does not mean the rates will be increased immediately. The wording of the resolution indicates the city council has an “intent” to raise rates. Further, according to Jay Glover of the city’s financial consulting firm Public Financial Management, disclosure documents will be included in the transaction stating the intent is to raise rates according to a certain schedule. This disclosure statement also will provide a financial picture absent the rate increases.

However, Glover cautioned, “from a revenue perspective, (the city) will not be able to issue new debt (if it does not increase rates).”

In the end, the council voted 5-1, with Keister in dissent, to approve the resolution.