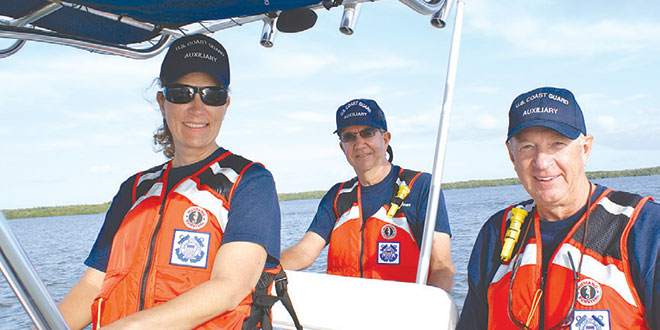 On June 23, 1939, the United States Congress authorized the act founding the Coast Guard Reserve as an organization of civilian volunteers to promote boating safety and to augment the local activities of US Coast Guard. It was a non-military service composed of unpaid, volunteer U.S. citizens who owned motorboats or yachts.

Two years later, Congress amended the 1939 act with passage of the Auxiliary and Reserve Act of 1941. Passage of this act designated the Reserve as a military branch of the active service, while the civilian volunteers, formerly referred to as the Coast Guard Reserve, became the Auxiliary.

This year on June 23, the members of Marco Island’s U.S. Coast Guard Auxiliary Flotilla 95 celebrated the 75th anniversary of the national creation of Coast Guard Auxiliary. Flotilla 95 has been active on the island for 47 years, helping to keep the 220 square miles of water from Rookery Bay to Chokoloskee Pass safe for boating, fishing and recreation.

In 2013, Flotilla 95 had 72 volunteer members who fulfilled its non-law enforcement and non-military role aiding in search and rescue missions, teaching boating education classes, conducting vessel safety checks, monitoring marine safety and environmental protection, and verifying the condition and location of aids to navigation.