Update of the Vehicle Accident Damaging the Big Flag Pole 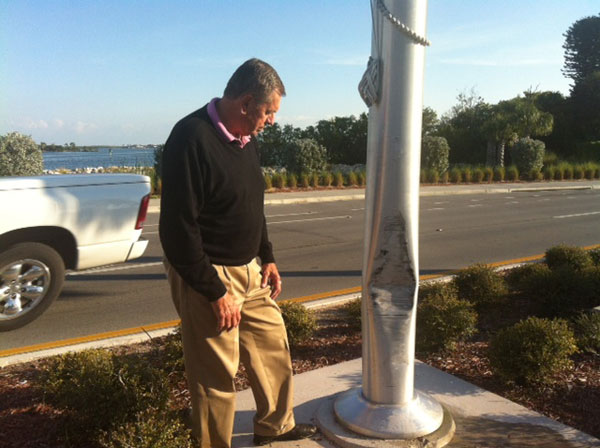 On Wednesday, November 7, the Collier Boulevard median, housing the Big Flag Pole, lighting fixtures and the Welcome to Marco Island sign was the site of a vehicle accident causing severe damage. Clarification of the accident, damage report, estimates to repair and replace, and procedures in affect, were discussed by the Big Flag Committee at a recent meeting. Attending were City of Marco representative, Tim Pinter members of the public including Jill and Mike Havey, donors of the pole and City Councilman, Larry Sacher.

The initial news report stating that “Replacement of the pole and lights will come from funds raised by private citizens” was reported as a miss quote by the paper.

Clarification and details of the accident was requested by the committee for transparency to the public. Facts were reported from a copy of the police report as follows:  The accident occurred at approximately 3:00 PM when a car driven by Anthony Schmalz of Columbus Way, Marco Island, reportedly fell asleep. His vehicle careened off the entry lane to Marco and went onto the median. Mr. Schmalz sustained minor injuries and was given a citation by the police.  Damage requiring replacement of flag pole and light fixture is estimated in excess of $10,000.00.

Follow up:  Contrary to the press statement regarding replacement and repair cost responsibilty, Mr. Schmalz’s insurance company, All State Insurance, has been contacted requesting the funds required for the damages.

Chairman Rice reported additional items of interest to the public as follows:

Funding: States Rice, “Mike and Jill Havey, the original donors of the flag pole generously offered to advance the funds to expedite the purchase of a new pole. Upon receiving funds from the insurance company, the Havey’s will be reimbursed”.

Flag Replacement – When a flag requires replacement due to wear and tear, temporary replacement flags are to be available and installed immediately. At the next patriotic calendar date, the next donated flag will be officially installed. The flag transition will take place attended by the donor of the flag to be replaced and the donor of the newly installed flag and open to the public. The flag replacement donor will be awarded the flag as a gift.  The changing of the flag will be handled by City Staff and will be the only persons who will be on the median. Ceremonial in nature, no traffic alterations are planned.  The public will be able to view the changing of the flags from City sidewalks along Collier Boulevard.

Fund Raising – The Big Flag Committee’s pledge is to insure that no public funds are to be utilized. Funding for the Big Flag in its entirety will be by donations. A goal of $20,000.00 was approved to keep in reserve for unexpected maintenance issues. Fund raising is an on going project and donations are welcome. Committee member, Leo Sutera, is the fund raising chairman and all interested parties are encouraged to contact him at email address: LSBSmaro@aol.com or by telephone at 781-829-8899.