Up to My Knees in Adventure 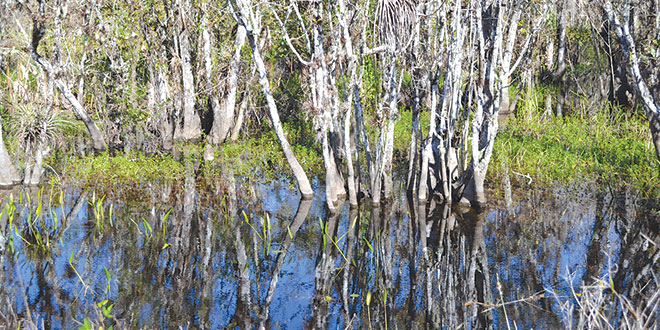 We arrived at our designated entrance point into the swamp and exited the tram; this was the first thing I saw. Of the countless pictures I’ve taken in my career, this now ranks among my most favorites.

Recently relocating to a place so geologically different from where I was born and raised in northeast Ohio, I get to experience new things almost daily. As a reporter, I go out on many assignments with a child-like wonder, and come away with life-long memories often feeling renewed and empowered. In my quest to see all of the exotic beauty on display here at the bottom of our nation, I’ve ventured where I never thought I could, pushing through my fears, phobias and physical limitations.

That being said, if someone had told me exactly one year ago that I would ever be knee deep in a swamp in Southwest Florida, I would have looked at them like they were crazy. But sloshing through a swamp was exactly where I found myself recently when I was allowed to tag along with the Friends of Fakahatchee’s (FOF) newest tour, a Tram Ride and Swamp Walk in the Fakahatchee Strand Preserve.

The Friends of Fakahatchee is a non-profit, volunteer Citizen Support Organization that exists solely to support the state preserve. FOF works with the park staff to provide resource-based recreation while interpreting, preserving and restoring natural

Exploring the swamp together, but each taking away something different from this a naturally beautiful and peaceful place.

resources. With education as one of its most important missions, FOF offers a number of guided adventures through the preserve, including its Ghost Ride Tram Tour, a Moonlit Fakahatchee Tram Tour, a combined Tram Tour and Wet Walk, a biologist-led Swamp Walk and the Fakahatchee Island Coastal Cruise.

As I attempted to dress the part that morning, I had no idea what to expect, and my naivety tossed a few speed-bumps into my day, but I also found a serenity there that I’ve rarely known in my lifetime. Looking into my closet — speed bump — I became painfully aware that my wardrobe lacked the clothing needed for this level of exploration, so just like any overly-cautious tourist, I made up for my lack of gear by layering bug repellent over sun-block.

Driving into the Everglades and along Jane’s Scenic Drive, nervous butterflies began to flutter in my stomach — speed bump. The day’s adventure would include three lovely ladies ready and eager to explore, and two very knowledgeable guides, naturalist Patrick Higgins and Friends of Fakahatchee President, Tom Maish. After introducing myself and snapping some pictures, I joined the group on the Ghost Rider

Patrick, who described himself as ‘scientist, sailor, soldier,’ expertly led the pack. PHOTOS BY MELINDA GRAY

Tram, and we began an educational cruise that would take us into the heart of the Strand.

Red Shouldered Hawks, Egrets and even a King Fisher were perfectly positioned along both sides of the bumpy dirt road, posing as if they were on the park payroll. The trail, a raised railway bed once used for clear-cut logging that wiped the area of its beautiful cypress trees, stretched a little over a mile, but offered so much to see. Old railroad ties lying in the water on either side helped to illustrate the historical parts of the narrative being offered by our guide.

The tram came to rest, and it was time to get our feet wet — speed bump. I was a little nervous about stepping down into unknown territory. My preconceived notions had me believing that the swamp bottom would be thick and muddy, ready to suck me in like quicksand. I was envisioning an embarrassing tumble. I’m not the most graceful person. My last camera died from water exposure, and I was pretty sure my brand new camera preferred not to swim. After passing out ski poles that would be our much-relied upon

The elusive, camera-shy reporter is caught on film.

walking sticks and relaying a bit of swamp walking 101, our gracious guide, Patrick, offered his back, and eased the girls into the cool, crystal clear water one at a time.

At that moment, everything I’d expected to be true about the swamp flew right out the window. The ground didn’t feel mucky; bugs didn’t try to carry me away; alligators and snakes hadn’t come to see what was for dinner. It was just pure beauty; the water temperature was refreshing on a warm day but not jarringly cold. The bottom was completely visible under the glass-like surface, and it was an exotic ecosystem in itself. The cypress trees and all of the varied forms of life covering them were reflecting off of the water’s smooth surface.

Our little group moved through the trails marked only by a few faded ribbons tied to random trees, but to me, it felt as though we were blazing new trails. Patrick described everything we encountered with the palpable enthusiasm exhibited only by those who truly love their jobs. We stepped over cypress knees and under orchid filled branches.

As with any outdoor activity, there were variables that could have

As we climbed out of the water, we walked right into the middle of an important operation in progress. Previously damaged bromeliads, that had been nursed back to health, were now being brought back to the exact spots where they were originally found, to be reintroduced.

been problematic, but thanks to our informed guides, I was pleasantly surprised at the ease of the low-impact journey. There were places where the water crept up from our knees to upper thighs, but Patrick quickly redirected us, favoring shallower water for this group of mostly beginners. Submerged branches and other hang-ups made for a few close calls, but thanks to our trusty walking sticks, everyone managed to keep their heads above water.

We ended very near where we first began, and I was disappointed to see the familiar area where we had entered, as now it was our exit. I could have explored in there for hours. The excitement I found in tracking through the swamp followed me onto the tram ride back, and I’ve felt it ever since.

I look forward to being able to try the other tours offered at the Fakahatchee Strand Preserve — some much longer and for the more experienced adventurer. The 90-minute walk ended much too quickly. After all, time flies when you’re having fun.

The next Tram Tour and Swamp Walk will be held Thursday, Dec. 11. For more information about it or any of FOF’s other guided adventures, visit www.orchidswamp.org or call 239-695-1023.