Up a Creek at the Nature Festival

The kayak launch point was at the very end a slow, three-mile drive down Shell Island Road, After donning life vests and stashing our valuables, we were helped into our kayaks one by one before our tour.

As a reporter, I’m often presented with opportunities to participate in fun local activities; invited to join in some wild adventures; and sometimes even confronted with daunting new challenges.

Recently, I was invited to join a two-hour, guided kayaking trip on the morning of Friday, Jan. 16, as part of the Coastal Breeze’s coverage of the 11th Annual Southwest Florida Nature Festival at Rookery Bay National Estuarine Research Reserve. When I agreed to take part in the tour, I was unsure of which category the day’s activity would eventually fall under.

Having only kayaked twice in my life, both times in the last year, I willingly admit to having only beginner-level experience. Furthermore, I’ve yet to venture beyond the canals surrounding my home in Goodland. My first time out, I flipped my kayak, got up-close and personal with some seriously sharp barnacles and killed my phone. Still, I came prepared with my usual kayaking survival checklist items and tried to quiet my nervous stomach as I bumped down the seemingly endless three-mile stretch of Shell Island Road to the kayak launch point.

The weather man had predicted a cold, gloomy morning. At 9 AM, though, the sun was already shining defiantly, and things were warming up fast. Moments after introducing myself, I was handed my waiver and matched to a kayak. Randy McCormick, program administrator at Rookery Bay and our naturalist guide for the next two hours, gave us a quick lesson in kayaking 101. He then described where we would go, what we would 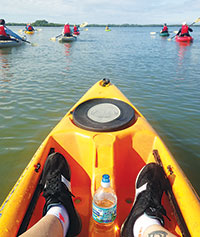 Although I had to give up my front-row seat to catch a photo of the group, I can’t deny my vantage point to explore Rookery Bay was stellar, no matter my position in the pack.

likely see and why Rookery Bay is so special.

One by one we eased into our seats and paddled out into the bay, where we awaited further instruction. We all practiced the finer points of paddling, turning, stopping and other general kayaking maneuverability. Those in the group who had never kayaked were readily mastering each practice exercise, and I was feeling very confident in my own skills. The anxiety began to ebb as the excitement built.

It was finally time to start our tour, and I was at the front of the line, sailing nimbly through the water with each stroke of the paddle. I’ve said this before, but I’m always amazed at how wild some parts of Southwest Florida are, especially when they are so close to urban, populated areas. As our small group explored, I was struck by the overwhelming feeling that we were miles away from civilization.

Gliding carefully alongside a beautiful, underwater oyster bed, just inches below the surface, “ooh’s” and “aah’s” could be heard from the group.

In my limited experience, early mornings are the best time to see Florida’s unique myriad of bird species, and this morning did not disappoint. We consistently encountered a wonderful variety of native winged wildlife, and from the very beginning of our tour, our guide pointed out and spoke knowledgeably about every bird species and sea creature we met.

It became clear to everyone very early on that McCormick loves his job, but the naturalists I’ve met usually do. Still, I was beyond impressed as we came upon

an osprey nest and were instructed to give the nesting mother a wide berth. While we tried to silently circumnavigate her space, he explained the reason for our stealth as he told her story of tragedy and motherhood woes.

The day had been tremendously enlightening so far, and the last half-hour of our trip turned out to be my favorite part. We lined up single file and slowly made our way through low-hanging mangrove tunnels, peering into the forest of tangled roots, each sustaining some form of life or another. In that moment, alone with such quiet, natural, untouched beauty, the impact I’ve seen people and development have on other local areas seemed to magnify exponentially.

I found myself disappointed when the tour ended, as I often do in these situations. We pulled up to the shore and exited our kayaks as easily as we had entered them two hours earlier, and just like that, it was over.

Tromping around a beautiful, natural oasis has never been my style; instead of making an invasive species of myself, I try to adapt to new surroundings. As to where I categorize this particular day, I think it encompassed a little bit of each; it was a moderately challenging, fun, local adventure.

I want to extend a big “thank you” to Rookery Bay and Randy McCormick for welcoming me into their world, even if only briefly. In addition to the lasting memory of this unforgettable endeavor, I was able to gain invaluable kayaking experience and knowledge about my surroundings, all of which are priceless to me.