Until I say Good-Bye: My Year of Living with Joy 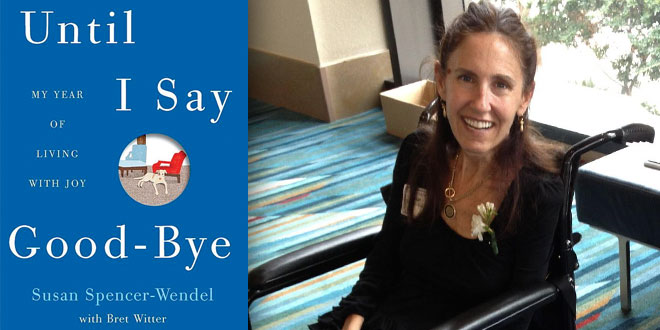 At the age of 44 Susan Spenser-Wendel, a Palm Beach Post reporter, was told that she had amyotrophic lateral sclerosis (ALS), or as it is more commonly known, Lou Gehrig’s Disease. There is no cure for this disease and sooner or later it is fatal as muscles lose their strength throughout the body. Her first sign of there being something wrong was when she noticed that her left hand had gotten thinner and weaker. Many of us would give up all hope and rail against the unfairness of our situation. But Susan, with a husband and three children, decided that she was going to make the most of her last days on this earth and live those days with joy and exploration. She would not only live each day to its fullest for her own benefit, but also to set an example to her children that the way to live your life was to take advantage of each moment, never saying “I give up.”

And live it she did.

With the help of her husband, sister and best friend she set out to travel and see the world, or at least the parts she wanted, and had time, to see. She had always dreamed of seeing the Northern Lights, so she and her friend Nancy took a trip to the Yukon to see them in all their glory. Unfortunately, the lights did not cooperate, but they still had a wonderful time, despite the efforts of putting on, and taking off, the many layers of clothes required to keep themselves warm in that harsh climate. She was, of course, totally dependent on Nancy to do all that for her.

At an early age, Susan knew that she was adopted and she decided to find her birth mother. All through her childhood her Greek adoptive mother had lamented that Susan was not quite up to snuff, not what her “real” daughter would have been like. Like most adopted children, she wondered what her birth parents looked like and in what ways did she look like them. Even more important, for her children’s sake, she wanted to know if her ALS was inherited. Finding her birth mother was relatively simple as she was still alive but finding her birth father was more problematic. What a thrill it was to find that he was Greek! So off to Cyprus she went to meet his family and learn about her background there. Much to her amazement they were most welcoming, once they found out she was not after her father’s money, and included her in their lives and were quick to share their family knowledge, pictures, relatives, food and homes.

It would seem that this book would be depressing to read but it is far from that. It is indeed a book of joy. Susan says, “I am not giving up. I am accepting.” She is determined to not spend her last days in a cave of self-pity. Again, she says, “The problem with a cave is it has no windows.” With the help of her husband, children, sister and friend, at various times, she is able to dig deep into her “bucket list.” She travels to Hungary (to see their old friends and the city where they lived when they were first married), to Cyprus, more than once, so that her husband can meet her family and to bring them the family bible that had been kept from the family by her father’s wife. She takes her children with her to Orlando to swim with the dolphins at Disney World. She makes a special trip to New York City to see her 14 year old daughter try on wedding dresses, since she knows she will not be around to share that special day when it actually arrives. She and her family rent a house on Captiva Island so that they, and her whole family, can enjoy the ocean together. Each of these trips is filled with joy and humor and the compassion of her extended family.

Through it all her husband is steadfast in his love for her and shows his love by meeting her every need, emotional or physical, in a most caring way.

And, in only three months time, she writes this book of 89,000 words…with only her right thumb, all that she can move without the help of others…on an IPhone! How can one not be astounded at the inner strength of such a person? What a wonderful example she has set for her children for their future. She wants them to live life as fully as they possibly can, and she, equally, wants her husband to carry on with his life to its fullest extent when she can no longer be a part of it.

As of the writing of this review on March 23, Susan Spenser-Wendel is still alive. The rights to her book have been purchased by Universal Studios to be made into a movie.

At this time, “Until I Say Good-Bye: My Year of Living with Joy,” is not available in the Collier County Library system. Perhaps it is too new as it just came out in March. I would suggest you call them and ask that it be purchased; However, it is a book worth purchasing for yourself, as I did.