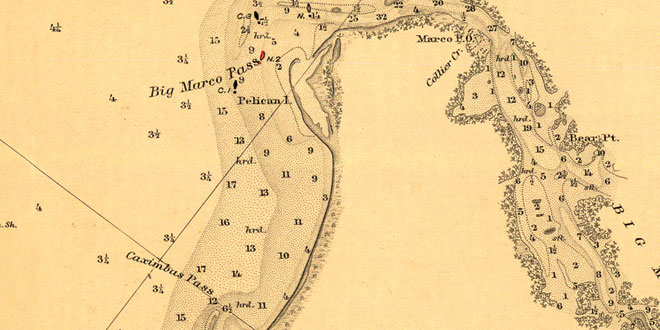 So, have you been to Karina Island or Pelican Island? Even readers who are very familiar with the Marco Island area and the adjacent 10,000 Islands may ask “Where?” to that question. But even more amazing, for some local residents the answer is not only “Yes,” but that they currently live there. Many others have actually been there often without realizing it!

We need to travel back in time 120 years to 1893 and take a peek at a U.S. Coast and Geodetic Nautical Chart of that era to help answer the question.

First a little background may help. When I was growing up on Marco in the late 1960’s, my Boy Scout troop would often camp on the “north beach,” which was located on what is now known as Hideaway Beach. In those days the north beach faced the Gulf of Mexico with the landward side of the beach bordered by a large strand of tall Australian pine trees. Our troop would arrive with our tents and gear via pickup truck, driving up a dirt road which was west of the current Spinnaker Drive. We set up camp on the beach above the high water line and close to the pine trees – but never under the trees as the mosquitoes were intense and would swarm in an area with no breeze. We often swam out into the Gulf a few hundred feet over deep water to a place where we could actually stand; an underwater sandbar which was covered with sand dollars. They could easily be picked up with one’s toes and brought to the surface and were all live creatures: some large, others very small, all brown and furry. While some beach goers were into filling buckets with them and killing them with bleach for their shell collections, we Scouts kept them alive and tossed them in a Florida version of skipping stones.

It was not very long ago, in fact in the 1970’s, that this sandbar arose from the sea and became its own island known as “Sand Dollar Island.” Later, in the 1980s, it was big news when it attached itself to the main beach in the area, which was just north of South 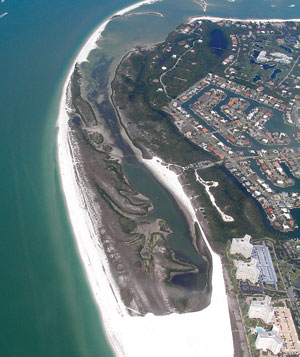 Tigertail Beach and Lagoon with the former Pelican Island now incorporated into Marco Island and almost invisible lying north of South Seas condominiums and extending into the western part of Hideaway Beach.

Seas Condominiums, and then continued to grow and curve around the north beach creating an inland lagoon where previously we had once swam across deep water. Looking at a current aerial map one can see that this new huge beach, now part of Tigertail Beach, added greatly to the westward protrusion of the north end of Marco’s unique crescent shaped beach.

Sand Dollar Island is only the most recent example of how Marco Island has widened over a mile to the west from its original historic beachfront located along the current Bald Eagle Drive. Sandbars rose up, connected, created trapped lagoons behind them, mangroves and vegetation grew and filled the lagoons, and the entire process repeated itself generation after generation as the Island grew wider and wider. An excellent book, “Naples Waterfront: Changes in Time,” by Todd T. Turrell provides 1952 aerials of Marco and includes transparent overlays showing the current platted lots and their locations over the historic topography. One can find their own or friends’ properties and see how Deltona carefully designed the Island to locate as many streets and lots as possible in the areas of beach ridges, and constructed the canals and waterways in the areas which had been former lagoons.

So that brings us back to “Pelican Island” – a name lost to history. However, if you carefully examine the attached 1893 coastal chart, you will find it. A narrow spit of land, on the north end of the beach looking very similar to the future Sand Dollar Island: attached to the main beach at the south end of the spit, and also with a lagoon on its east side. Examining a little closer the 1893 Coastal Chart you can see that the lagoon adjacent to Pelican Island exits north into Big Marco Pass.

South of this area, years before Clam Bay was created in a similar fashion by a sandbar that arose and formed the beach ridge that the South Seas Condominiums are now built on. Unlike so many other trapped lagoons that grew over with mangroves, Clam Bay escaped that fate because of the tidal flow via Clam Slough which went through Marco’s beach (“slough” being 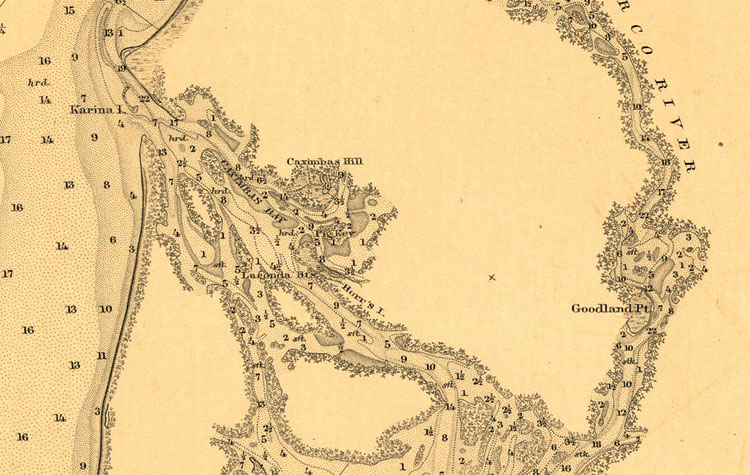 another name for a “pass” which is not always navigable).

When the first permanent settler of Marco Island, W. T. Collier (the father of Capt. Collier, the builder of the Old Marco Inn), arrived on the Island, he settled his family in the area of Hideaway Beach and built a small bridge over Clam Slough in the 1870’s. A hundred years later in the early 1970’s, one walking the beach would still have been forced to forge a deep pass cutting through the beach where Clam Slough exited into the Gulf. It was actually quite dangerous to wade across if the tide was high as the flowing water moved rapidly and was deep. However, nature was slowly closing this pass. In fact, but for the Corps of Engineers granting Deltona’s permit for the Collier Bay area in 1976, Clam Bay would have followed Marco’s natural geologic history and become a trapped lagoon, later to fill up and be a swamp covered with mangroves. To avoid this fate, Deltona built the flat bridge on North Collier Blvd. and another bridge at Hernando Dr. to flush Clam Bay with tidal flow to keep the Bay from stagnating.

So, back to our original question – where is the Pelican Island of the late 1800’s? Clearly, over time it lost its name as the former island became part of the main beach, widened, became more stable and turned into beachfront. Today the south end of the former Pelican Island is the original Tigertail beach located on the eastern side of the current lagoon; Spinnaker Drive is located in the center while the north end of Pelican Island is Waterside Drive in the Hideaway Beach subdivision.

And where is the former lagoon shown in the coastal chart of 1893? It clearly became a trapped lagoon as the pass flushing north into the Big Marco River closed off. Later the south parts of it were dredged to create the waterways east of the Tigertail Beach’s parking lot and waterways east of Spinnaker Drive in the Blackmore Street area. To the north, the 1893 lagoon still remains in its natural state as a remnant leaving inland ponds full of mangroves and vegetation between Waterside Drive and Hideaway Circle. 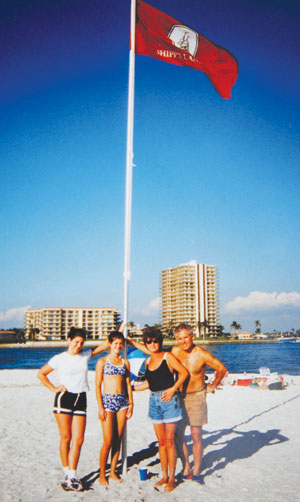 The Island claimed by Shipp’s Landing on July 4, 1998. Jim and Karen O’Donnell with their daughters Kelly and Trish.

of Karina Island? Again, if we look at the map, you will see a very small island located in the middle of the Caxambas Pass. This pass has been very dynamic over the years and sand has shifted in and out creating sandbars and small islands. Many who are familiar with the pass know that there is currently a small sandbar in the pass due south of Shipp’s Landing which, until last year, was an island with a bird and turtle nesting site, but was over-washed after a tropical storm. This unnamed island also previously appeared after the Shipp’s Landing Condominiums were first built. In fact, by around 1998, the Shipps’ condo owners mounted a flagpole on the Island, flew their condo flag and claimed the island as part of their domain! It became a favorite place for beach parties. If you examine the 1893 Coastal Chart, Karina Island appears to be slightly west of the current sandbar, but is still in Caxambas Pass. As a result “Karina” would be a logical, as well as a historic name, if a new island ever re-forms.

What do we learn from all of this? First, it is amazing how tides, storms, shifting sands and currents quickly destroy or create islands, spits of land and beaches. In just a short time, in fact in less than 20 years, a sand bar that arose became Sand Dollar Island, lost its “island status,” attached to the beach and became a large land mass and rookery for birds and marine animals – in the exact same way and in same place at least 100 years prior. Pelican Island also become an integral part of Marco’s beach and in fact, largely helped to create its crescent shape. Secondly, that shape, a crescent, is due in part to sand and movement from our two major passes: Marco River to the north and Caxambas Pass to the south. Lastly, it is clear that our beachfront is a dynamic environment, ever changing and, if left alone, over time natural forces would continue to grow the Island larger and larger in a westward direction.

A special thank you to Jim O’Donnell for his photo of the flagpole on the Island claimed as Shipp’s Landing Phase IV.