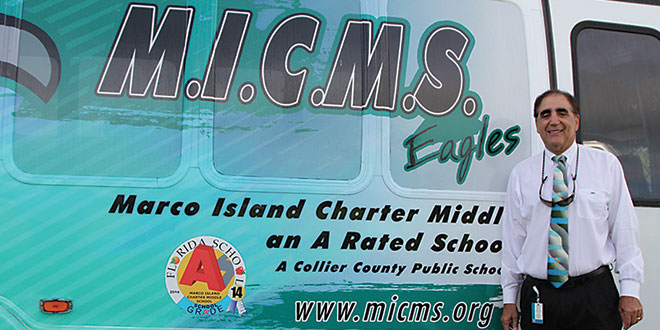 Abounader is proud of the school’s A rating. PHOTOS BY VAL SIMON

In order to cut rising costs to its athletic transportation budget, the Marco Island Charter Middle School Board of Directors last year authorized Board President Tarik Ayasun to purchase two 25-seat buses for transporting student athletes to and from away games. The purchase was completed, and the buses were refurbished with new seats, new seat belts, new tires and a complete inspection and repair of the engines were done by Gorman’s Auto Service or Marco Island.

To raise funds for the operations of the buses without using school funds, the buses were wrapped with advertising of local businesses as sponsors. The first bus has been completely sold

On Monday, Dec. 29, Marriott General Manager Rick Medwedeff visited MICMS where he was met by Ayasun and Principal George Abounader, and presented the school with the first installment of the hotel’s three-year contract for the bus sponsorship.

The rear of the bus bears the names and logos of the other sponsors: Gorman’s Auto Service,

The second bus is now being prepared for wrapping. There are a few openings for sponsorship. Those interested may contact Jerol Ayasun at 239-394-6099, ext. 260 as soon as possible.

The cost for sponsoring a spot on the rear of the bus is $1,000, and a three-year contract is required. Payment terms are also available.

In addition to displaying of their corporate name and logo on the buses, the sponsors’ payment will also cover three years of volunteer hours (worth $800 per year) for a student of their choice.

Volunteers with CDL (Commercial Driver’s License) are needed by MICMS.