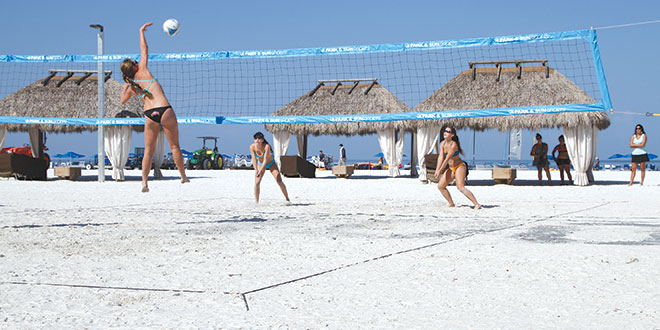 Shortly after dawn on a hot and steamy Saturday morning, 32 girls gathered in the sand to “dig” up a tsunami, and that is just what they did. The Tsunami Beach Volleyball Club held a beach volleyball tournament at the Marco Island Marriott Resort and Spa. The event was sanctioned by USAV National Junior Beach Tour and organized by the Tsunami Beach Volleyball Club, a branch of the volleyball club Heatwave.

The girls gave it their all, competing against each team within their age category before going into pool play. Four age groups were represented 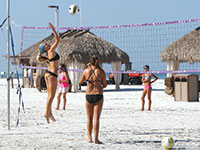 under 12’s, under 14’s, under 16’s and under 18’s. Girls placing first, second or third, received a bid to the National Championships in the USAV tour in Milwaukee, Wisconsin. It was one of the hottest days of the year on Marco Island, and there was little respite from the heat with a cloudless sky.

Beach volleyball is an intense game, with only two players covering the court on each side of the net. One has to be willing to bite the sand, get up and keep right on playing. Despite the perspiration and sand, it is a great workout.

With the game played at the most beautiful beaches, it is no wonder it is one of the fastest growing sports in the country. The tournament ran from 8 AM until late afternoon.

This is the first tournament of its kind on Marco Island, and like most USAV events, once the word gets out, the field will grow. “Some tournaments are now so popular, once registration opens they fill up fast and close to more entries.”

Many of these girls play indoor volleyball as well, whether it be club ball or through school. The organizer, Shaliece Hall, is the volleyball coach at Naples High School and a Club Director at Heatwave

Volleyball. According to Hall, “This is a great start to bringing more high quality juniors volleyball to our area. We are looking forward to doubling the field of players next year and providing an awesome bid tournament at such a fabulous location like the Marco Island Marriott.”