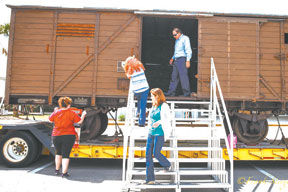 Members of the community were also welcome to visit the Holocaust Boxcar at MICMS. PHOTOS COURTESY OF FRANK STEIGER PHOTOGRAPHY

The Holocaust Museum of Southwest Florida recently brought its authentic World War II era boxcar to Marco Island Charter Middle School. The traveling boxcar is believed to have been used to transport civilians to Nazi concentration camps. Sixth, seventh and eighth grade students had a chance to tour the boxcar and hear stories from Holocaust survivors, as the boxcar was on display at the school from April 17th through April 27th.

The boxcar, originally built in 1919, was acquired by The Holocaust Museum of Southwest Florida in May of 2007. Disassembled in Germany, piece by piece, the boxcar had to undergo a careful restoration process. By the Spring of 2008, it was ready to hit the road, traveling to numerous locations throughout Florida under the Boxcar Transportation and Education Project. There are a number of boxcars of this nature on display 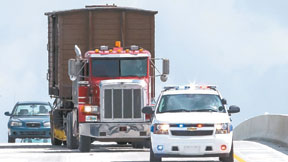 Escorted over the bridge to Marco.

throughout the country, yet this is the only “traveling boxcar.”

The majority of the boxcar is still original. Manufactured in the Vorm. Schumann Factory in Germany, it still features 75 percent of its original wood and 100 percent original steel. Many other aspects to the boxcar, such as the hook and latch system for connecting boxcars, bumpers and the steps at each door are still original.

It is not clear if this particular boxcar carried civilians to concentration camps, yet it was in the service of the German Railway System during the 1930’s and 40’s and is the same type of boxcar used in these transportations.

Students at Marco Island Charter Middle School had a chance to learn these facts about the boxcar, but also learned about the conditions of being forced to travel in one. 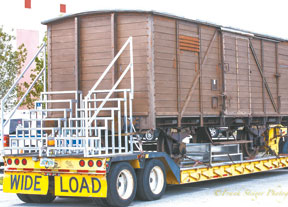 Each class went through the boxcar, where they learned of its use, getting a feel of what victims of the Holocaust had to face.

As many as 100 people would be crammed into one boxcar. Where they were coming from, and where they were going, determined the length of their trip. Those being sent to Nazi concentration camps spent two to four days in less than standing room only conditions. Those being sent to work camps in Siberia faced up to six weeks of traveling in these conditions. There were rarely any windows or vents; many being sealed off or blocked with barbed wire. A commode came in the form of a bucket in the corner or a hole in the floor. The only food or water the travelers had was what they brought with them.

After visiting the boxcar, students gathered, by grade 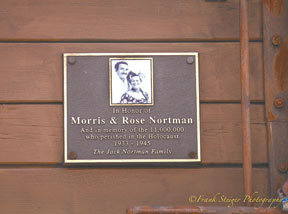 for an assembly where actual Holocaust survivors shared their stories. “Rather than have one entire school Assembly, we scheduled the assembly by grade level to make the environment more intimate,” explained George Abounader, Principal of MICMS.

Thanks to Mrs. Lampos, Social Studies teacher at MICMS, who coordinated the Holocaust Boxcar visit, students had a first hand experience in understanding the deplorable conditions of transport to the concentration camps as well as the brutalities that followed.

MICMS students are not the only ones who have had the chance to bear witness to such a devastating time in our world’s history. Since the Spring of 2008, the Boxcar Transportation and Education Project has impacted over 45,000 people in six different counties in Florida. It has visited more than 60 locations, including libraries, churches, elementary, middle and high schools, colleges and universities.

To learn more about the traveling box car, visit www.holocaustmuseumswfl.org