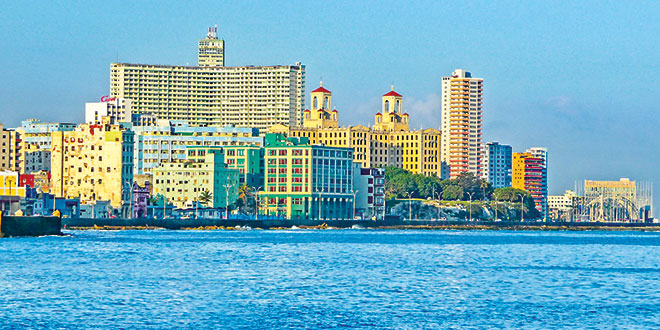 Sunrise on part of the Vedado section of Havana. The famed Hotel Nacional is the building with the double red roofed cupolas.

Travel to Cuba for US citizens is evolving. There are a host of new transportation options either already in place or planned including ships, ferries, charter and commercial flights, even trains (well, sort of….read on). While more choices are available, travel still requires that visitors from the US meet one of 12 broad categories to justify their trip; under US law, travel to Cuba purely for a vacation is not allowed.

The 12 accepted purposes include visiting a close relative, educational activities which involve “people to people exchanges”, journalistic, religious, and humanitarian activities, public performances, professional research, “support” for the Cuban people. Family members of professionals and others traveling to Cuba for such approved activities as research, meetings, or performances may now accompany those individuals without having to apply for a special license.

There are more permissive opportunities for joint business ventures there as well. This will be important in the future as it will allow expansion in telecommunications, internet, and finances.

Most major tour companies as well as those specializing just in travel to Cuba offer a number of options that meet the requirements, usually under the “people to people” category. Viewed as an educational opportunity encouraging meaningful exchanges between Americans and Cubans, there must be organized activities with a guide or agent. For this reason, the tours are usually very structured and involve a variety of experiences including meeting and interacting with Cuban teachers, farmers, musicians, artists, academics, and/or other professionals and workers. I’ve been told that there are only three travel agencies in Cuba licensed to work with American companies, so no matter which US company you book with, your local guide will be from one of those three agencies.

Independent travel is allowed, but must

Cuba is known for its “Yank Tanks”; classic American cars from the 1950’s.

also satisfy one of the categories and the independent traveler must be able to “justify” his/her trip. We have friends who recently traveled there on their own for a week; they were not asked any questions about their purpose when they went through Cuban immigration upon entering the country. The only question we were asked was if we had recently visited Africa. Our friends and we were asked no questions upon exit.

There are regularly scheduled charter flights from places such as Miami, Tampa, New York, Houston, and Los Angeles; more cities are scheduled to be added as departure locations to Cuba. For a short period of time, there were flights from Ft. Myers to Havana. However, they were suspended over what were described as a “technicality” and “paperwork problems”. Flights can even be booked via cheapair.com and it is anticipated that approval of commercial flights is imminent. Ferry service has been approved for future travel between Key West, Ft. Lauderdale, Miami, and Havana.

There are small ships such as the 3 masted sail cruiser S/C Panorama that provide the opportunity to participate in a people to people exchange in 5 locations around the island. Carnival Cruise Line has announced people to people cruises stopping in Havana, Santiago and Cienfuegos beginning later this year. Vacations by Rail advertises a specialty trip to Cuba with service on Amtrak’s Silver Meteor from New York to Miami for a cruise to and around Cuba.

Non-approved travel for US citizens to Cuba via another country such as Canada, Mexico, or the Canary Islands is still considered illegal based on US law. 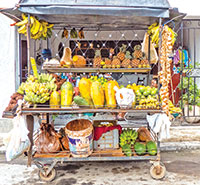 For air travel, there are restrictions on luggage. In general, there is a weight limit of 66 pounds (30 kilos); more than that is subject to a surcharge per kilo. When we traveled to Havana, our airline, American, limited us to 44 pounds including carryon; more than that would have resulted in additional charges. It is recommended that travelers arrive at the airport 4 hours prior to flight time. In our case, that meant 4 AM. It took about an hour for us to go through the three-step check and weigh in process. This is because there are so many people taking gifts to friends and relatives in Cuba. We saw flat screen TVs and many hay bale size plastic wrapped bundles of clothing being shipped. In fact, there was so much extra weight on our plane that the flight was delayed while some fuel was taken out of the tank.

Money conversion and usage in Cuba is a bit involved. Although it has been announced that there is a plan to merge the two, there presently are two currencies in use in Cuba, the Cuban Convertible Peso (CUC) used by visitors and the Cuban Peso (CUP) used by locals. There are about 24 CUPs to a CUC. Money can be changed at 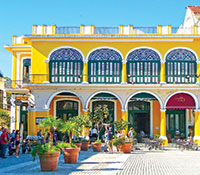 CADECAs (change bureaus), banks, and major hotels. There is a CADECA in the arrivals part of the airport in Havana. The American dollar is pegged at about 1 to 1 with the CUC. In addition to a possible conversion fee, there is a 10% fee in changing US dollars into CUCs. For that reason, some recommend using Canadian dollars, Euros, or Swiss Francs instead of dollars. I keep a variety of currency in my safety deposit bank for future travel and I did have all three available to me. I brought my Canadian dollars with me, but figured that with the exchange rate at the time I purchased the Euros and Francs, it actually was better to use US dollars, despite the penalty. The lines at banks and CADECAs in Old Havana can be long.

Although use of US credit and ATM cards in Cuba has been approved officially, the implementation of this has been slow. In addition, few places are set up for accepting credit cards, even those issued by non US banks and there are few ATMS. It is difficult (some say impossible) to exchange US travelers checks and the original purchase receipt may be required at exchange.

Except for prescription medications, I’ve never worried much about carrying an abundance of “what ifs” when we travel. I’ve found that it is easy to purchase almost anything unforeseen we might need at local pharmacies. Even in Mexico City, when my husband had a self-diagnosed throat infection, I went to a farmacia, asked for “pastillas para la garganta” and was able to get a very effective antibiotic. Not so, we were warned, in Cuba. So, into my suitcase went an abundance of Alleve, Immodium, Neosporin, hydrocortisone, and other “maybe

we will need them” items including bug spray for those mosquitos I had read about. Fortunately, we did not need any of the medications and the only time bug spray was needed was when we headed into the thickly forested Escambray Mountains in central Cuba.

As travel of US citizens to Cuba increases, there is concern about the infrastructure not being able to meet needs, especially as it refers to the number of hotel rooms and the upgrading and updating of these hotels. Following the disbanding of the Soviet Union, Cuba went through an extended period of economic difficulties known as the “Special Period.” One of the many affects of this was the diverting of money from infrastructure maintenance to things like education, food, medical care. Intermittent water problems can be a problem in hotels, sometimes even in the top ones. It is recommended to not drink the tap water in Cuba. We did use it for brushing our teeth and always accepted ice cubes in restaurants.

Increasingly, casa particulares are becoming popular. They are rooms or apartments in private homes and may provide some meals as well. There are a number of online sites, including Airbnb, through which one may be booked. Casas are required to be licensed and are routinely inspected to make certain they meet prescribed standards. 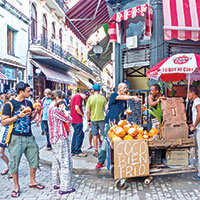 Enjoying refreshing coconut milk on the streets of Old Havana.

on the many landlines in Cuba. It is about five cents a minute for in country calls, about $2.50 a minute to the US. Verizon offers a Pay-As-You-Go option for its customers. Calls are $2.99 per minute, data is $2.05 per MB, while standard international rates apply for messaging. People I know who have used their Verizon smart phones in Cuba say that service is inconsistent.

When we told people we were traveling to Cuba, many of them asked immediately, “can you bring back Cuban cigars or rum?” Americans may bring back up to $400 of goods, including no more than $100 total of tobacco AND alcohol products. That said, a box of Cohibas costs more than $100. At the Romeo y Julieta factory in Havana, we purchased a package of 7 medium sized Cohibas for $55. People wishing to bring back rum in their carryons must purchase it at the airport, where the price is the same as in the city. Santiago rum, we were told, is made in the original Bacardi barrels.

There are many online resources for travel to Cuba. For more information on independent travel requirements and procedures, consult www.treasury.gov/resource-center/sanctions/Programs/Pages/cuba.aspx and travel.state.gov/content/passports/en/country/cuba.html. I found www.lahabana.com useful for a listing of cultural events and other information.

As noted above, travel to Cuba is evolving. Information provided above was accurate at the time of writing this column.