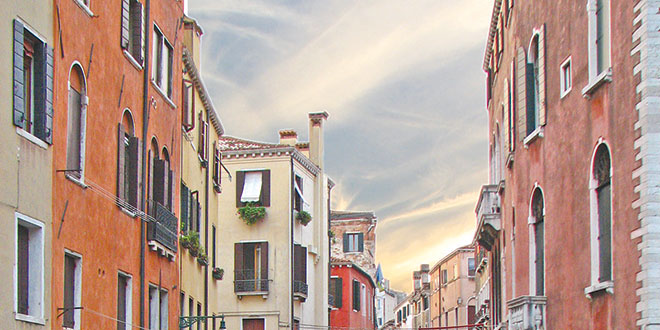 I enjoy reading books that evoke the culture and neighborhoods of places that we have visited. Italy is a popular setting for authors who write mystery series as well as other novels. I’ve written before about my favorite, the Commissario Guido Brunetti books set in Venice by Donna Leon. Her portraits of Venice are so real, the last time we were there and passed by Brunetti’s headquarters, the questura, I had to restrain myself from stopping in to ask to meet him! We did have a coffee at one of his favorite bars, a few doors down from the police station. I was pleased that her twenty third Brunetti mystery, By its Cover, was released this year.

As equally charming as Brunetti are his wife, the very bright and feisty Professoressa Paola and the crafty Signorina Elettra, the person to go to in the questura for information. With Brunetti, expect to stop frequently for un caffé for that, of course, is the Italian way!

Magdalen Nabb has written 14 titles featuring Marshall Salvatore Guarnaccia, a southern born member of the Florence carabinieri, stationed inside the Pitti Palace. Her first book, Death of an Englishman, was published in 1981 and reprinted in 2013. The book presented a good picture of the lives and politics of the Florentines. I was particularly amused by her description of the restaurant, Casalinga, 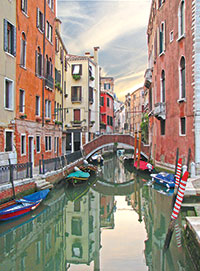 a neighborhood favorite in the Oltrarno district back in the 80s when the book was written; that same establishment was recommended to us by a local more than 30 years later. Death of an Englishman was a short book; one to be savored and not read too quickly. Ms. Nabb passed away in 2007 at the age of 60, so there will be no new titles. Happily, though, her novels are timeless and all of them have recently or will soon be reissued by Soho press.

Christobel Kent’s hero, Sandro Cellini, a former policeman turned private eye, has been featured in five books set in and around Florence. Although not the first in the series, my introduction to her writing was with The Drowning River. Much of the action took place both in the neighborhood of an apartment we once rented and near the Boboli garden, which, of course, enhanced my enjoyment of the novel. Perhaps not as charming as and a bit darker than Leon’s Commissario Brunetti, Cellini is an engaging character as is his wife, the low key but sage breast cancer survivor, Luisa. While Leon tends to focus on the frustration of the Venetian justice system, Kent features the darker side of Florentine society. I followed up with Kent’s Dead Season and found it a bit ponderous. I am looking forward, though, to trying her other 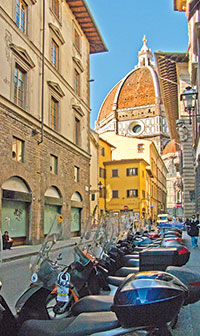 Florence is a popular setting for many writers. photoS BY VICKIE KELBER

Although Katherine Hall Page has written a series featuring Faith Fairchild, the snoopy, can’t-let-it-go caterer and wife of a minister, most of her mysteries are set in New England. The most recent, The Body in the Piazza, takes place in Rome, Florence, and some Tuscan hill towns. I enjoyed this light weight tale more than I thought I would; Page has a good feel for the Italian culture (especially the food portion!) and evokes a strong sense of place. While the book did keep me engaged, I realized it was the description of these beautiful cities that hooked me, not an affinity for the writing style or characters; I have no desire to read other titles in the series.

A work of nonfiction, The Monster of Florence by Douglas Preston and Mario Spezi Preston was written in 2008, but there is a new afterward to the most recent edition. The book is very unsettling, not because of the “Monster” of the title, but because of the machinations of the Italian justice system. The Monster is a serial killer who murdered seven couples during the period of time from the 1960s through the 1980s. It has been claimed that the Monster was one of Thomas Harris’ inspirations in developing the character of Hannibal Lechter. 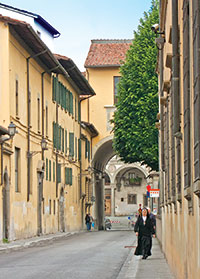 Much of the action of The Drowning River took place in this Florentine neighborhood where we once rented an apartment.

who relocated to Florence, and Spezi, an Italian journalist, worked together to try to identify the killer. Soon they became the focus of the investigation; Preston had to flee Italy and Spezi was arrested. The story is an amazing one of corruption, fantastical plot theories, and abuse by the Italian justice system. What was most chilling, however, was finding out in the afterward that Giuliano Mignini, the prosecutor whose questionable tactics led to abuse of office charges in the Monster case was the assistant prosecutor in the Amanda Knox case. You might remember that Amanda Knox was the young American charged, acquitted, and then recharged with the murder of her roommate. For me, knowing this about Mignini put the entire Knox case in a new and very frightening perspective.

If you are a Europhile who savors reliving the travel experience or enjoy reading about places you have visited or hope to visit, you will be entertained by Rick Steves’ non fiction work, Postcards from Europe. Written in 1999 and updated in 2009, Steves’ observations and characters are timeless. Vignettes from his travels abroad as well as his signature sense of humor and discrete location chapters make this a good choice for a book you can pick up and read in spare moments. Postcards from Europe also gives insight into how Steves built his career as well as how his TV shows are funded and produced.