Touring The Isles of Collier Preserve 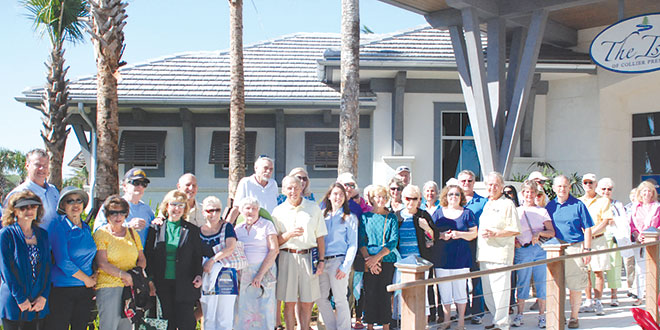 The gang’s all here! PHOTOS BY NOELLE H. LOWERY

Spearheaded by Minto Communities Florida, the 2,300-acre development boasts some 1,649 home sites, which include coach homes, paired homes and single-family residences ranging in size from 1,600-3,900 square feet. The piece de resistance of the outdoor living community, though, is the 1,300 acres Minto set aside to remain undeveloped. This protected land encompasses lakes, preserves and natural habitat with miles of hiking, biking and walking trails. Set to open in 2015, the amenities will include a clubhouse with a resort-style pool, fitness center, gymnasium, bocce ball and tennis courts and a private yacht club and marina with a boat ramp.

I attended the tour on behalf of Coastal Breeze News. A quick note, I spent six years covering real estate, construction, growth and development for a business publication in Orlando. I did this during the real estate boom in the early 2000s when residential real estate development in Central Florida gave all new meaning to the term “slash and burn.” During that time, I learned a few things about irresponsible development on environmentally sensitive lands. I was intrigued when I heard about this tour and Minto’s claim that it is building an “eco-friendly-community.” I have to say I was impressed.

To say The Isles of Collier Preserve has been well received is an understatement, according Bob Stevens, Minto Communities Florida director of operations. Before taking Fiala’s group on a tour of the community and four of its 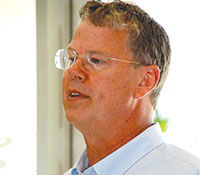 model homes, Stevens helped the visitors explore the sales center. Right now, the themed-building is home to a historical perspective of the Minto company and its property, as well as a full schematic of the development and an in-house design center where homebuyers can create the home of their dreams.

“Sales have been fantastic,” Stevens told the group. “We just opened in January, and we had 2,100 people in for the grand opening weekend.” He added that the sales center averages about 175 prospective buyers each weekend.

But it was more than potential sales figures, the list of amenities or the one-on-one attention to the desires of the homebuyer that impressed me — and clearly homebuyers — about the community. A quick look at the history of the property that is now The Isles of Collier Preserve is one reason. Originally dubbed Sabal Bay, the land was approved as a development of regional impact in 1986 to include 4,000 housing units, a golf course, village center, school site and fire station. All of this was proposed with little thought to the 600 acres of wetlands and uplands that would be destroyed if the DRI came to fruition.

Enter Minto, which purchased the land from its most recent owner Collier Enterprises. Minto has been building homes in the Sunshine State for 50 years. Headquartered in Canada, the family-owned business has built more than 70,000 homes throughout Canada and Florida, and has grown into an integrated real estate development, construction and management company.

When Minto bought the land, it could have made good on the plans in the original DRI, but company officials had bigger

and better plans for the property. They understood that people who shop for homes in Southwest Florida are looking for something special, something different. There is a certain charm in this area that makes it quintessentially its own. It is a love of the outdoors and all that it has to offer — from brilliant sunsets to walks on the beach to a romp in the swamp and scrub.

Instead, Minto completely reworked the plans and committed itself to developing an environmentally responsible community. This became even more apparent during the private golf cart tour of the community and the model homes. While the areas designated for homes were cleared and roads paved, the majority of the land was untouched. Tall pines spiraled toward the sky flanked by palm trees while water was everywhere. Not quite the scorched earth policy Central Florida developers clung to 10-15 years ago.

A trip through the model homes confirmed my first impressions. Each home was dedicated to capturing the unique “Old Naples” character of this section of Southwest Florida. Absent was the Neo-Mediterranean and Italian architecture so prevalent throughout this area, and in its place were wide open floor plans with an entire wall of sliding glass doors opening each house up completely. The outdoors and its natural surroundings became part of each home.

In the end, I was impressed — impressed by the attention to detail and history of the area inherent in the community, impressed by open, welcoming feeling of the model homes and impressed that a residential home developer took the time to create a community that understands that green is more than the color of money.