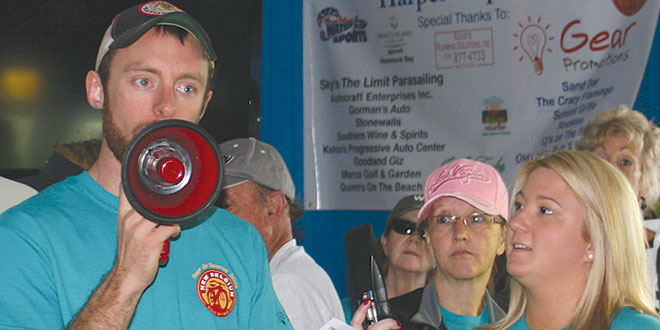 Bicyclers participating in the Sixth Annual Tour de Taverns raised more than $9,000 recently to benefit Harper Stapleton, a precious two-year-old girl who was stricken at 15 months old with viral encephalitis, compounded by seizure disorders. Harper is the granddaughter of Marco Island residents Mike and Janet Stapleton.

The bicycle poker run attracted about 100 people to the Sand Bar restaurant and sports bar on a very windy November morning. Riders prepped for the tour of local establishments with a hearty breakfast and a cold one from the tap. Sand Bar’s Manager Capri Sickler coordinated the event with local businesses, including Island Bike Shop, which donated rental bikes 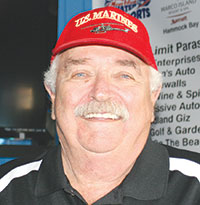 for the event. Prior recipients of funds raised by the Tour de Taverns have included Avery McCaskill, a child diagnosed with leukemia, who according to Capri is now “doing well,” and the Twin Towers Orphan Fund, which provides counseling to children affected by the disastrous events of 9/11.

Mike Stapleton was present for the event and thrilled at the enthusiastic turnout. His son Billy and daughter-in-law Tara are faced with the ongoing emotional and financial toll of caring for their daughter and her medical treatment. Harper’s first hospitalization occurred in February 2013 at Sinai Children’s Hospital in Baltimore, MD, her home town. She was eventually transferred to Children’s Hospital in 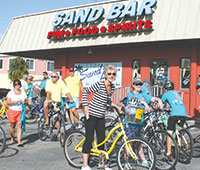 Cyclists climb on their bikes to head to the second stop on the Tour de Taverns.

Philadelphia, PA. Stapleton noted that Harper is doing as well as can be expected for such a young patient with a rare and serious disease.