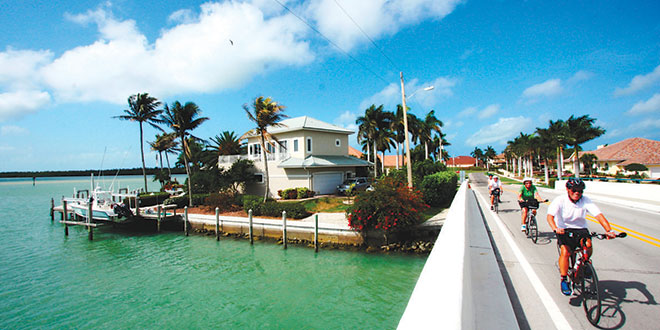 Photos by Scott Shook Scene from a past Tour de Marco, the popular bicycle tour that offers participants incredible water views, flowering plants and trees and some of the only hills in Southwest Florida.

A popular event that blends exercise, some of Marco Island’s most scenic environs and raising funds for one of the island’s chief community organizations has returned after a one-year hiatus.

Registrations are underway for the 2016 Tour de Marco, set for April 24, which takes cycling enthusiasts on treks along the island’s roadways on courses laid out in five, 15 and 30-mile distances. The event benefits the Greater Marco Family YMCA’s scholarship fund.

“It’s a chance for families to enjoy a bike ride and not a race, around the scenic areas of the island, including the south end, Key Marco, Goodland, Caxambas and Roberts Bay,” said Anthony DeLucia of the Y, who is the chairman of the event organizing committee.

About 200 riders took part in the 2014 Tour de Marco, most from Marco and elsewhere in Collier County, which raised about $2,500 for the Y. “Our goal is to double that,” said DeLucia.

The event includes free giveaways, water and other refreshments for participants.

The tour was started by the city’s Bike Path Volunteer Committee, “With the goal of exposing people to what were then (the city’s) shared-use paths and bike lanes,” said Scott Shook, the event’s founder and a member of that committee.

Shook said members of the Bike Path committee had served as the tour’s director until this year, when DeLucia assumed the role. “He’s just a real dynamo and I look for him

Riders from the Progressive Auto team discuss the route for Tour de Marco 4.

to take it to new levels because he (DeLucia) knows everybody on the island and he’s really good at fundraising,” said Shook.

The entry fee is $25 for adults and $45 for families, until April 22. After that, the fees are $30 for adults and $50 for families. T-shirts will be given to the first 150 to register.  Registration will also be possible on the day of the tour, starting at 7 AM. Riders choosing the 30-mile-long course will depart at 8 AM, while those choosing the 15-and-five-mile courses will depart at 9 AM.

Helmets are required for all participants and volunteer group leaders will be present at the beginning, middle and rear of each group of riders. Helmets will be available for use by riders who don’t have them.

Last but not least, “Participants must adhere to all traffic rules,” said DeLucia.

For more information about the tour and the Y, call 394-9622 or visit www.greatermarcoy.org/events-activites.