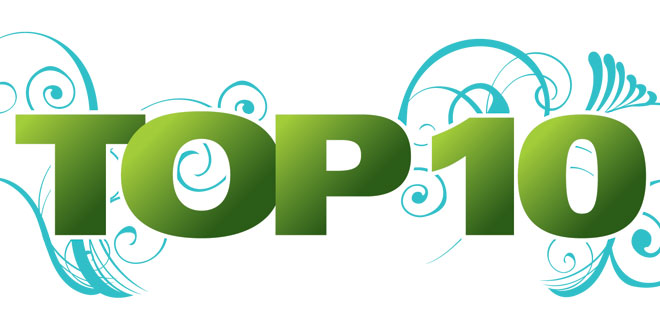 It is the end of another year already, and the inevitable “lists” are popping up everywhere. Here is my own Top 10 list for this final 2013 edition of “Book Remarks.” The parentheses after the author’s name include the date of the edition of Coastal Breeze News referencing that article. (www.coastalbreezenews.com/category/entertainment/book-remarks/)

Six Years is truly worthy of the term “thriller.” It was not only fun to read, but the intelligent dialogue and winding plot kept my mind engaged throughout. The ending was not at all what I expected, but Coben inserted a last little twist lest the reader lapse into complacency. It was a pleasurable way to spend an afternoon, and I cannot imagine anyone being disappointed in this book.

Not just a satire on what the news media has devolved into it, this is a thriller with a biting wit, characters to love, hate, or laugh at, and a continuously evolving plot, riveting the reader to the page. It is an added attraction that the locales are places familiar to many of us – most of the story takes place in Atlanta and Marco Island with some action in London and Miami. Deadly News is a satisfying way to spend a rainy Florida summer afternoon or any afternoon for that matter.

Reading this book will take you through a gamut of emotions — anger, tenderness, pride, elation, sorrow. Despite some repetition, the book is riveting because we do see the “characters” change and evolve, especially Santini, Don Conroy, the patriarch, and also because it is infused with (mostly dark) humor throughout. It is just great storytelling.

I wanted to read this book because it addresses sibling relationships, in particular the loss by premature death of an adult sibling — a topic rarely written about or discussed. Society does not seem to acknowledge sibling grief but focuses on surviving parents and the grief of losing a child and/or spouses and their grief. No one else knows your personal history, shares your DNA or your formative experience. No one else touches your primal nature or pushes your buttons quite like a sibling.

If you are interested in family dynamics, community, commitment, sacrifice, muddling through, and are willing to have your heart tugged, you should delight in this book. Dreher does an exceptional job describing the dynamics of family relationships. His description of his sister’s life, illness and death are deeply poignant, and the love shines through.

Sections of the book reflect the courses of dinner — aperitif, appetizer, main course, dessert and digestif. With each course, Paul (first-person narrator) reveals the backstory of his family — Claire, Michel and himself — as well as what he knows of the other characters — Serge, Babette, son Rick, Rick’s sister and adopted brother. About half the book is action at the dinner itself, and about half is explication of preceding events, layering context with each course.

This is some of the best satire I have ever read. Paul skewers Holland, its prime ministers, fancy restaurants, the justice system, French vacation homes, the French, international adoption and the Dutch educational system.

As a non-golfer, I was attracted to the biographical aspect of this book. What I found was essentially a history of competitive professional golf in the U.S. disguised as the story of one man’s life. When I started this book, I was interested in a good biography, learning about the qualities of a man who was the only golf instructor used by Jack Nicklaus for the first 39 years of his career. I discovered that Jack Grout’s contribution to American golf is inestimable. The fact that this book is introduced by a tribute from Jack Nicklaus and closed with a tribute from Raymond Floyd testifies to the influence he had on the game. The book reads like a “Who’s Who” in golf in recounting the players both pro and amateur influenced by Jack Grout.

Dick Grout’s co-author Bill Winter is a local resident — “about a driver and two 3-irons from the Jolley Bridge.”

Some paint pictures with their words, but Binchy paints life with her words. The reader cannot just “see” her characters in her mind’s eye but experiences life right along with the characters. The soaring giddiness of falling in love, the deep delight of parental pride, the pathos of betrayal, the comfortable silences of long-married couples, the crushing grief of a loved one’s death, the regenerating spirit of genuine friendship, the seeming impossibility of just carrying on — these are guaranteed in Binchy’s books. It’s why millions of us love her. We know every book will be packed with human frailty and strength, that there will be a happy ending despite all the travails and that we will feel better about our own lives. Reading a Maeve Binchy book is like getting a lovely hug from your favorite auntie. Bincy passed away July 31, 2012; this is her final book.

Don Tillman is a 30-something professor of genetics at a Melbourne university who has decided it is time to get married. He has never had a second date in his life, and most of his first dates have ended prematurely. Professor Tillman has Asperger’s syndrome and lives his life with strict adherence to routine, rationality and time management. TV fans should think of Sheldon Lee Cooper “Big Bang Theory” or Martin Ellingham “Doc Martin” on PBS to grasp the depth of Don’s social ineptness.

The Rosie Project is absolutely hilarious, a comedy with a large helping of scientific information, charming characters and the mystery of Rosie’s real father. If you need to relax and release those feel good endorphins, The Rosie Project delivers.

Lest you think this is a book about gorgeous vacation spots, let me explain the book title. “I hate to leave this beautiful place” is the call of a man turned into a goose in an Inuit tale. He repeatedly cries out this phrase as migration time —winter — approaches. That this is an exceedingly apt title becomes evident as you read the five sections of the book. What makes this “memoir” different from most is that Norman was able to draw upon the journals he has kept throughout most of life to effectively write in “real time,” or from the mindset he was in at that time in his life. For the most part, the incidents appear to be uninfluenced by the passage of time, the imperfect memory we all have of what we used to be.

Someone is the story of an unremarkable woman living an unremarkable life. Her life is full of love. Marie has a loving family and was raised in a web of love in an Irish-American neighborhood in Brooklyn, but her life is not without tragedy and hardship. There are many funerals in this book, many heart breaks.

Interestingly, McDermott never uses dates in her narrative, but the reader deduces the time period from her vivid descriptions and precise prose. We know by the deliberate use of terms, such as “suburb, carport, rickrack trim, foundling,” as well as descriptions of clothing, Brylcreemed hair, walking everywhere, evenings spent listening to the radio. Of course, since Marie is telling the story, we know by the events in her life. The small moments that make up an ordinary life are attended to, not the outside world except when it imposes itself but even World War II is never mentioned by name.

Simply put, I love this beautiful book. Someone is eloquent, exquisite, extraordinary.

Happy New Year! Here’s to another year of great reading!